Hafthor Björnsson awkwardly dropped the bar when he tried to place it back on the squat rack. 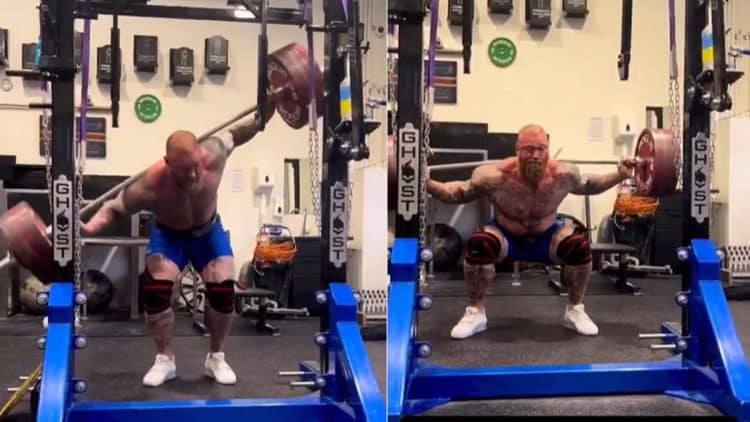 The 2018 World’s Strongest Man, Hafthor Björnsson, recently announced in a YouTube video that he is planning a comeback to strength sports, most notably to powerlifting. While the name of the competition is not known, Hafthor did reveal that it will take place on December 3rd, 2022. So, with not much time left, Hafthor is pushing himself to the max, which proved to be very risky in his previous training session. Hafthor loaded 340 kilograms (749.6 pounds) onto the barbell and performed a couple of reps on the squats. In the aftermath, Hafthor narrowly avoided serious injury due to an accident.

Having equipped himself with a lifting belt and knee wraps, Hafthor Björnsson braced himself and performed two reps with 340 kilograms (749.6 pounds). While that lift portion of his set looked very secure, the incident happened once Hafthor tried to place the bar back on the Monolift Squat Rack. He missed the rack with one side of the barbell, which resulted in him not being able to control the weight.

As the weight on the barbell amounted to 340 kilograms (749.6 pounds), all of it ended up falling over Hafthor’s back. Luckily it only scraped his skin and didn’t end up collapsing on him completely. However, considering how heavy it was, Hafthor could have suffered a muscle injury as he was extremely lopsided.

Hafthor Björnsson recently revealed that he is done with boxing, so he effectively retired from that sport after a few successful years. Most notably, he beat the 2017 World’s Strongest Man, Eddie Hall, with a unanimous decision. Following that, Hafthor tried to arrange a fight against Tyson Fury, but that did not come to fruition.

Having retired from boxing due to lack of passion for it, Hafthor Björnsson has returned to his favorite activity, strength sports. His Strongman comeback was at the 2022 Rogue Invitational, as Hafthor further improved his old Weight Over Bar World Record. This saw him toss a 25-kilogram (55-pound) weight over a 20-feet 3-inch high bar. In addition, while doing his interview afterwards, Hafthor explained that he might do a full comeback to Strongman and complete a full show.

Hafthor Björnsson once again felt what it’s like to be one of the best in the Strongman scene, perhaps bringing back some fond memories. He has previously won the 2018 WSM, multiple Arnold Strongman Classics, and many other prestigious competitions. Overall, Hafthor competed in 73 competitions and won 38 of them.

Hafthor Björnsson’s plans for the future still stand, but he will now definitely take a more careful approach to the squats now. Luckily for him, despite a few scratches on his back nothing else seems to be the consequence. However, his accident was still a very freakish sighting.

Barbell Row vs. T-Bar Row: Which One Is Better?