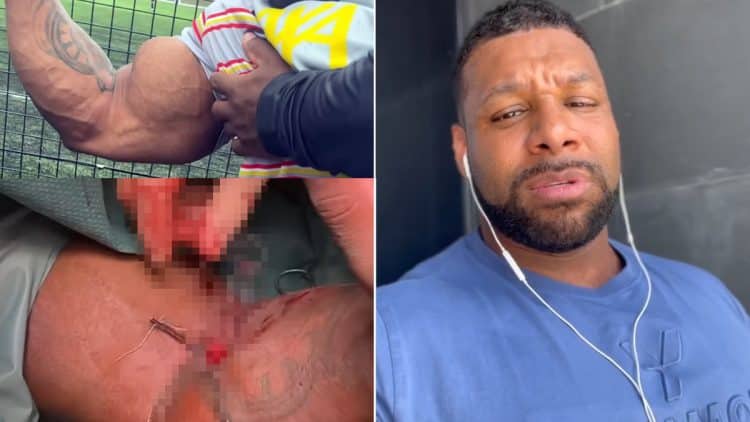 It may be a while longer before fans see UK’s Nathan De Asha back on a bodybuilding stage. In a recent video, De Asha revealed that he injured his right shoulder after it snapped throwing his son’s football.

In 2021, Nathan dominated in the IFBB Pro League with three victories back-to-back. He won titles at the Europa Pro Championships and the Arnold Classic UK. In Europe, he proved himself on home territory against a tough lineup of talent, which included names like Patrick Johnson and Samson Dauda. Then, he was crowned champion at the Yamamoto Cup last October.

It’s been a tough season for De Asha, who pulled out of the 2022 Arnold Classic in February following a painful left bicep injury. Prior to this year, De Asha established himself as a fixture in the Men’s Open division with impressive muscle mass, conditioning, and huge arms.

Despite earning his right to compete on the sport’s most prestigious stage, it looks like Nathan De Asha’s turn will have to wait. In the latest Bodybuilding University round table, Nathan informed his fans that he sustained an injury to his right bicep and will not compete at this year’s Olympia contest.

“I tore my left bicep in January right. Went to try the machine, tore my right bicep at the end of July. So, to all these little gobshi**s on here why I’m not doing the [2022] Olympia — it’s two bicep tears in the same fuc**ng year, so go fu** your mom. Two bicep tears bro. It happened. I felt needles,” Nathan De Asha shared.

When reliving the painful incident, Nathan said his bicep ‘snapped’ after he threw his son’s football. Initially, his plan was to still compete at Mr. Olympia to show some of the contenders he could make first call out with only a few weeks of training. Given the setback, De Asha will need some time to make a full recovery, however.

“I threw my son’s football and then my right bicep just snapped. So, I’ve only started training for the past 14 days. As people see me a lot, I was a lot smaller a few weeks back trying to do, you know a fuc**ng three-week off-season to try to get to the Olympia.

If we do it in three weeks bro and beat some of these fuc**ng so-called top five from the show, then obviously they are a bag of shi*,” Nathan De Asha said.

Even though his training has been affected by two biceps tears this year, Nathan doesn’t miss an opportunity to exercise in the company of high-profile athletes. In July, he collaborated with the Stoltman brothers, two of the best strongman competitors. They linked up for a strongman versus bodybuilding workout that left them all with a massive pump.

When it comes to bodybuilding cycles, De Asha swears by Trenbolone despite its controversial reputation. He specified that he uses the compound year-round and that it never gives him extra aggression. He downplayed Trenbolone’s mood-altering properties and shared that it’s his go-to drug for maintaining strength.

In a separate post published to Instagram, De Asha followed up the podcast by sharing more details about the events leading up to his surgery.

If you guys noticed me, that’s why because I had the operation. You guys know — you can’t see it now, no imperfections there or nothing – but it happened,” De Asha shared.

De Asha is on the road to recovery following a successful surgery. In spite of the bad luck, Nathan hopes to heal as soon as possible to resume his bodybuilding training for next year.

Check out the full podcast below: