These two beasts do not mess around when it comes to leg day! 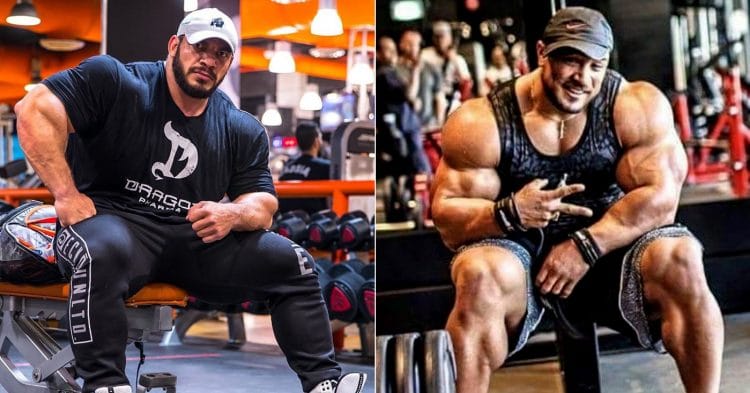 Top Open division bodybuilders Roelly Winklaar and Big Ramy are two of the freakiest specimens you’ll ever see on stage not only because of their top-tier genetics but because of the effort that they put into their training.

In a recent workout at Oxygen Gym, Winklaar did some extremely heavy leg press variations with drop sets to squeeze out as many reps as he possibly could. He started with the angled leg press with what appeared to be 34 plates in total. They took off two plates at a time during the drop set, then he did some single-leg angled leg press, vertical leg press, and finally leg extensions that were just as brutal.

Now, both Roelly Winklaar and Big Ramy have had disappointing showings in their previous Olympia appearances mainly due to a lack of perfect conditioning.

Winklaar placed 5th last year after having finished 3rd in 2018 which was his best placing ever at the competition. Big Ramy did not compete at the 2019 Olympia after an underwhelming 6th place finish in 2018 which was a big downgrade from 2017 when he was the runner-up to Phil Heath.

He left Oxygen Gym in 2018 after that result and after returning at the 2020 Arnold Classic, there were improvements that were evident as he came in third.

Winklaar has already qualified for the 2020 Olympia although Big Ramy has not, but the latter has considered competing in hopes of qualifying for this year’s event. The only concern right now is the travel ban due to the COVID-19 situation which would mean neither could compete if things are the same by December of which the Olympia had been moved too.

Read more: Big Ramy Willing To Compete In 2020 In Hopes To Qualify For Mr. Olympia

In fact, a few top competitors wouldn’t be able to compete including last year’s Olympia runner-up William Bonac and Hadi Choopan (2019 Olympia 3rd place finisher). Hopefully, things change though because with 7x Mr. Olympia Phil Heath announcing his return this year, everyone will be looking forward to an epic showdown.

Not to mention, current Mr. Olympia Brando Curry and 7x 212 Mr. Olymia Flex Lewis will be right there chasing the Sandow trophy as well.

But, as always, we’ll be sure to keep you updated regarding the upcoming 2020 Olympia.