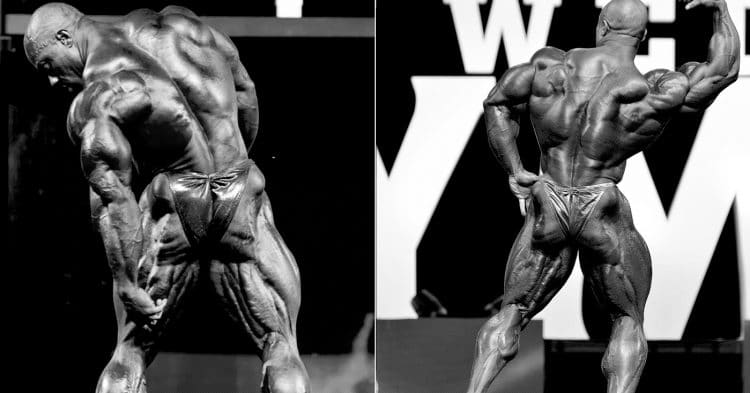 Hamstring development is essential for maximizing lower body aesthetics, strength, and function. Many times, exercisers will focus only on the quads or not do any movements to target the hamstrings. But that’s a big no-no.

Now, we understand that right now, the gym just isn’t an option for most of us. Not to mention, if you don’t have exercise equipment, you’re most definitely limited to bodyweight exercise options. So, we made a list today with our top hamstring exercises, bodyweight-only.

Most people don’t need equipment to build the hamstrings especially if you’re up to date with current training techniques. And don’t worry, you don’t have to go searching for exercises as we’ll show you the best options and how to do them.

The hamstrings are part of the posterior chain (backside of the body) located opposite the quadriceps. It’s composed of three muscles which include the…

The hamstrings are highly involved during walking, squatting, jumping, and similar movements (hip and knee movements). It’s important to note that all hamstring muscles cross both the hip and knee joints. Except for the short head of the biceps femoris which only crosses the knee joint.

Therefore, you have to utilize exercises that involve purely knee flexion to sufficiently train this muscle. But you want to focus more on exercises involving movement at both the hip and knee joint. That’s because the hamstrings generate the biggest amount of force when decelerating knee extension and hip flexion prior to ground contact during the gait (walking and running) cycle. (1)

The hamstrings are especially susceptible to injuries due to many reasons. So strengthening them in different positions is also the best thing you can do to help prevent injuries.

Alright, now that you’re better acquainted with the anatomy and function of the hamstrings, it’s time to show you our list of best hamstring exercises, bodyweight variations only.

Note: We’ve provided movement instructions and video examples under certain exercises while others have a link inside that contains instructions.

The glute bridge is one of the most basic lower posterior chain exercises. But it doesn’t only involve the glutes as the name suggests. Your hamstrings are also working and most people can do this exercise. It’s definitely a beginner exercise when doing two legs at a time since it doesn’t provide a whole lot of resistance.

Don’t worry though, you can do the single-leg variation as a more advanced option. The single-leg glute bridge is extra challenging as you have even more weight to work against. But it does require a little more stabilization compared to the two-legged version. 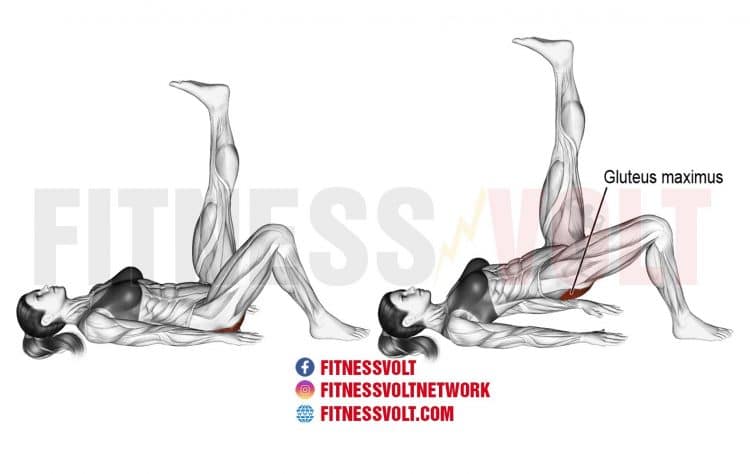 This exercise is also unilateral in nature which means you can identify a weak side and then correct it.

Read: How often can I do bodyweight training?

The sliding hamstring/leg curl is truly an amazing exercise and a genius idea for working the hamstrings. It engages both the hamstrings and glutes and it’s a difficult exercise when done through a full range of motion. But even if this exercise gets too easy, there’s always the single-leg variation which is much harder.

To do this exercise, you’ll need to be able to slide your feet across the surface that you’ll be lying down on. So you can wear socks on tile or wood, or you place two slidable items under your feet.

The Nordic ham curl is one exercise we definitely recommend for strengthening and building your hamstrings. It provides more of a challenge than most other ham movements. Not to mention, it’s very effective for preventing injury as you’re strengthening your muscles in an elongated state.

One 2020 study found the Nordic ham curl reduces hamstring injury incidence. Although, it does not reduce the severity of injuries. (2) 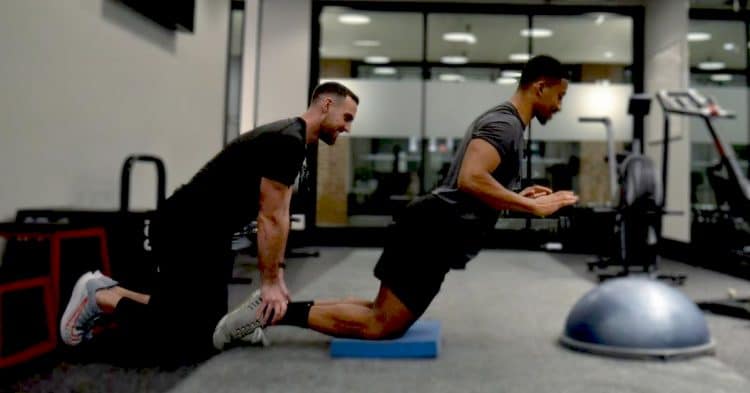 In a 2019 review and meta-analysis of 8459 athletes, researchers found that doing the Nordic ham curl regularly, actually reduced hamstrings injuries by 51%. It was concluded that this is an accurate representation of the effectiveness of the Nordic ham curl across multiple sports. (3)

Now, how most people would perform this movement is to focus more on the eccentric (lowering) portion of the exercise. Now, it definitely helps to have a partner to hold your ankles down to the floor. But you could also secure your ankles under a bed, table, barbell, or anything else that’ll work.

If you cannot perform this exercise in its most basic form, use an elevated platform in front of you so that the range of motion is shortened.

Few exercises will have your hamstrings sore the next day like a stiff-legged deadlift variation. The great thing about the bodyweight-only version is that there’s a lot less stress on the lower back compared to if you were to use a lot of weight with this exercise.

Doing it on one leg also challenges the muscles much better which is more conducive to building muscle.

If you lack the balance to do this exercise in its basic form, hold onto a solid object with one hand for balance. This will also allow you to perform the movement with a larger range of motion to get an optimal stretch in the hamstrings.

One of our absolute favorites, the forward-leaning Bulgarian split squat is a unilateral (affecting one side) exercise that allows you to load the hamstrings. It does require balance and if you do have access to weights or bands, you can increase the difficulty of the movement.

Note: if you have dumbbells you can use them as shown in the video. If not, that’s OK. Just use your own bodyweight.

Also, check out our complete guide to Bulgarian split squats.

The only exercise on our list that involves joint impact due to jumping side to side, skater jumps are also a more functional hamstring developer. Besides working your hamstrings, this exercise requires and improves stabilization and balance.

We do suggest you have healthy joints before doing this exercise though. It requires ankle and knee mobility while the hips are also involved in a more dynamic fashion than other hamstring exercises.

If you don’t have a Swiss/exercise ball then skip this exercise. They’re not too expensive though if you want to invest in one and it’ll also provide you with more exercise options. The Swiss ball leg curl is a good option for those who don’t have as much mobility since your legs are elevated and you can progress easier with this movement.

The cossack squat is an advanced lower body bodyweight exercise. Therefore, you should already be able to perform similar exercises that require you to be in a deep squat position. The range of motion required really places significant stress on the hamstrings. But the glutes, quads, and core are also engaged due to the nature of the exercise.

This isn’t the movement for those with limited joint mobility or bad knees so just keep this in mind. There are other effective variations that you can do instead.

You can also use a progression to work your way up to doing the exercise most proficiently.

The lateral lunge is an easier variation of Cossack squat that most people can comfortably and safely perform. It works all muscles of the legs and challenges stability simultaneously.

The lying single straight-leg extension is a slightly more difficult variation of the single-leg hip bridge (see the second exercise on the list). 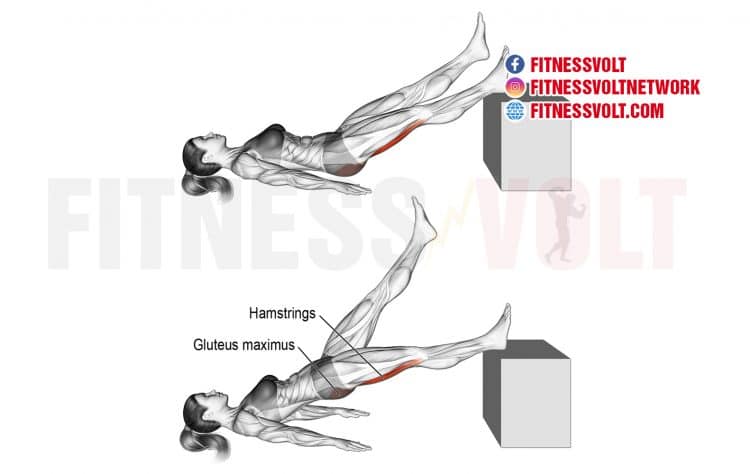 The difference being, your legs are extended and elevated on an object and then you’ll lift your hips off the ground. You can do it using one or two legs depending on your level of training.

What's the function of the hamstrings?

The hamstrings are located on the lower posterior opposite the quadriceps. They play a big role in helping us to walk, run, squat, and bend at the pelvis.

What are the best bodyweight exercises for the hamstrings?

We’ve put together a list of our best bodyweight hamstring exercises.

Can you build strength with bodyweight hamstring exercises?

Absolutely! However, certain exercises are better than others for building strength. But, depending on your goals, there will come a point when bodyweight exercises will not be sufficient for progressing in building maximal hamstring strength.

How many sets and reps should I do for bodyweight hamstring exercises?

There’s no perfect answer to this question. But we recommend doing at least two hamstring exercises per workout, with no more than 4 sets of varied rep ranges between 5-25 reps.

How often can I do bodyweight exercises for the hamstrings?

This depends on the amount of training volume that you do for your hamstrings. The more overall sets and reps you do, the less frequently you should train and vice versa.

You don’t want to overtrain but you don’t want to undertrain either. This isn’t something that we can accurately guide you on so you’ll need to experiment and learn how to listen to your body.

Research shows that working your hamstrings does, in fact, reduce hamstring injury. This was determined when testing the Nordic ham curl exercise in athletes over several different studies.

We hope that you’ll utilize these very effective bodyweight hamstring exercises. The awesome thing about the options on our list is that you don’t need equipment which means they’re also pretty convenient. There are also exercises for individuals of all experience levels too.

So, try out some for yourself next time you train the lower posterior chain and we promise you’ll see big benefits.

What is a slim thick body? Experts will tell you the term slim thick describes a woman with a small waist, flat...