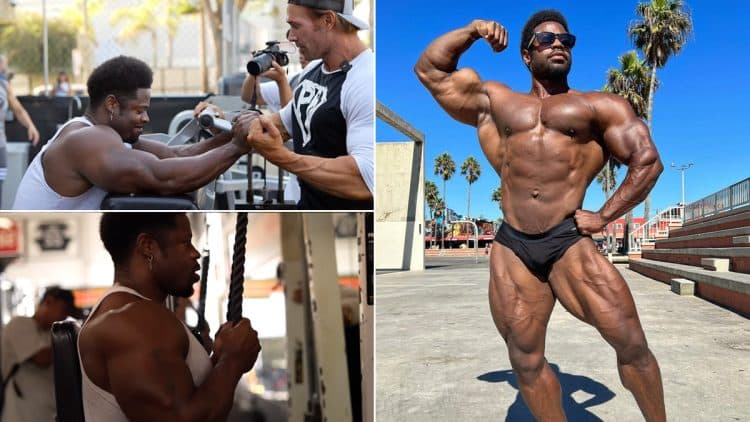 Classic Physique competitor Breon Ansley wants to have an edge over his competition in the arms department. Ansley is an American professional bodybuilder and a former two-time Olympia Classic Physique champion, winning the title in 2017 and 2018. After a second-place finish at the 2019 Olympia, the 42-year-old finished third at the 2020 and 2021 Olympia behind champion Chris Bumstead and runner-up Terrence Ruffin. Ansley intended to compete at the 2022 Tampa Pro but had to shelve the plan due to a health issue.

The 2022 Olympia will take place from Dec. 15-18 in Las Vegas, NV, where Ansley will attempt to recapture the title. As a part of his competition prep, the former Classic Physique Olympia champ joined bodybuilding legend Mike O’Hearn for an arms workout. O’Hearn is a lifelong natty athlete with over a four-decade-long career in bodybuilding, powerlifting, martial arts, fitness modeling, and acting. The 53-year-old is best known for playing Atlas in the television series American Gladiator. O’Hearn is a four-time Mr. Natural Universe title holder and has won the Fitness Model of the Year award a whopping seven times.

During the workout, the duo discussed bodybuilding and Ansley’s preparation for the 2022 Olympia. The video of this session was uploaded on Mike O’Hearn’s YouTube channel.

At the beginning of the video, ‘The Titan’ opined that someone at Ansley’s level might not have a lot left to learn after reaching the pinnacle of competitive success and decades of training scientifically. Ansley responded that the learning phase never gets over and said:

O’Hearn and Ansley then proceeded to do the triceps pushdown as a part of their arms training session. O’Hearn noticed Ansley’s foot placement and form during the first set and could not help but notice the perfection with which Ansley carried out the reps.

“It doesn’t matter what exercise you do. It could be bent over rows at 400 pounds or triceps pushdowns with the rope. Set the body,” O’Hearn said.

“Absolutely set the body. Just like posing. We pose from the ground up. Same thing with training,” Ansley responded.

During the training session, Ansley revealed that he is trying to bring the biggest biceps and triceps to this year’s Olympia. However, he admitted that he has a lot of work to do for that to happen.

Is 2022 Olympia the final chapter of Breon Ansley and Chris Bumstead’s rivalry?

Ansley and Bumstead’s rivalry is one of the fiercest rivalries in the Classic Physique division history. However, when Ansley finished third at the 2021 Olympia behind Bumstead and Ruffin, many considered it the end of the rivalry. Ansley is looking huge in some of his recent physique updates. Plus, he has hinted at a move up to the 212 division.

On the other hand, Bumstead has publicized his intentions to retire from the sport in near future. Therefore, the 2022 Olympia could potentially be the final chapter of Bumstead and Ansley’s rivalry. Will Ansley dethrone Bumstead when the Superbowl of bodybuilding returns to its home in Las Vegas on Dec. 15 later this year? Only time will tell.

You can watch the full video below, courtesy of Mike O’Hearn’s YouTube channel:

Bodybuilders Chris Bumstead and Iain Valliere made an important announcement during a lower body workout. Bumstead is a Canadian IFBB...