"The Martian" says he reached out to Andrew Jacked and apologized: 'I shouldn't have attacked him at all, that's squashed and in the past.' 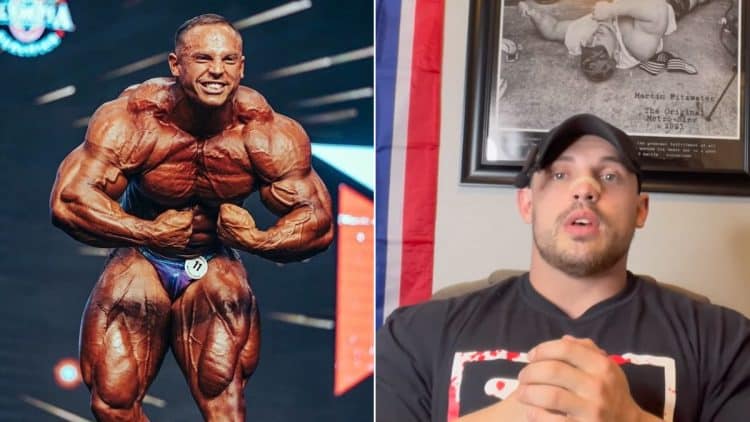 Men’s Open bodybuilder Martin Fitzwater is clearing the air after becoming disgruntled following his fourth-place finish at the 2022 Arnold UK contest. In a recent video, Fitzwater revealed that he apologized to Jacked man-to-man after taking issue with him for receiving a perfect score at their last contest.

“These top three guys [at the Arnold UK] that beat me, they all kicked my butt in size. They were conditioned. These guys deserved to beat me,” says Fitzwater while reflecting on his recent performance.

This year saw Martin Fitzwater emerge as a legitimate force in the Open class. He’s developed his physique under the watchful eye of perennial Men’s Open contender Branch Warren.

Despite his young age, Martin has proven himself in the IFBB Pro League with detailed separation, conditioning, and huge arms. Those assets nearly carried him to victory at the 2022 Texas Pro, however, the aesthetics and size of Andrew Jacked proved to be his downfall.

While Martin finished runner-up in Texas, he left the contest with more momentum than he entered with. Weeks before the Arnold UK, Jacked was uncertain if he would get to compete due to Visa issues. Fitzwater heard the news and thought he was ‘bit**ng out’ out of the contest. Though, if you were to ask Andrew about a rivalry, he would say it was conjured up by the media.

Ultimately, Jacked made it to the Arnold UK and won the contest, again defeating Fitzwater, who finished fourth place. In the aftermath, Fitzwater admits to being disgruntled but is ready to squash the beef with Andrew once and for all.

Martin Fitzwater Apologizes to Fans and Andrew Jacked: ‘I Know Where I Need to Improve’

In a video shared on YouTube, Fitzwater apologized to Jacked and his fans.

“Let’s get into the bad media of things. First off, I apologize to all my fans for looking like an ass again. This isn’t a good look for me, and I apologize for that. I’ve reached out to Andrew [Jacked] and apologized to him man-to-man. I don’t want to address that too much, but it’s squashed and over and done with,” Martin Fitzwater said.

According to Fitzwater, he was disgruntled about Andrew getting a perfect score at the Arnold UK. He adds that he shouldn’t have attacked him and warned others to be careful what they post on social media because things can be screenshotted and sent to the media.

“I was disgruntled about him getting a perfect score when it was not his fault at all – I shouldn’t have attacked him at all. Like I said, that’s squashed and in the past.

Martin believes he can learn from these trials and continue growing as a man.

Lesson learned here. Like I said, something that you guys can take away from it I guess, I’m growing as a person, I’m growing as a man. I’m super super competitive and it’s definitely a downfall of mine to be honest.”

Looking back on his last performance, Fitzwater agrees that the three men ahead of him (James Hollingshead, Patrick Johnson, and Andrew Jacked) all deserved to beat him. He plans to go back to the dawning board and make improvements.

“I got my butt kicked to be honest. They looked great man,” Martin shared. “And now, going back to the drawing board, I know where I need to improve.”

There are some in the community who believe judges favor bigger athletes like Jacked instead of smaller bodybuilders. Former Mr. Olympia Samir Bannout has suggested that judges in the sport today are wrong for favoring ‘big guys.’ Bannout believes when he competed, judges looked at the ‘overall package’ instead of favoring size.

Despite the lackluster result, Fitzwater understands where he needs to improve moving forward. While Martin won’t get a rematch with Jacked at Olympia this year, perhaps the two will meet down the road in the future.

RELATED: Andrew Jacked Promises ‘The Best is Yet to Come,’ Will He Live Up to The Hype at 2022 Mr. Olympia?