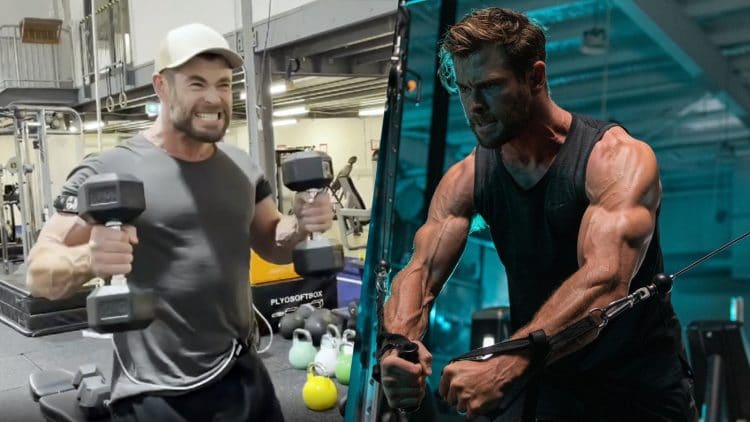 Actor Chris Hemsworth is getting ready to be in peak physical condition to play the lead role in the Extraction sequel. The Australian actor recently posted a workout photo on Instagram that shows him working out on a cable machine.

Chris Hemsworth’s muscular physique and popping veins in the picture are enough to get the fans excited. Hemsworth launched his own fitness app CentrFit back in 2020 to help people maintain a healthy lifestyle. He thanked his team at CentrFit to help him get in the peak form in the caption.

“Six weeks out from shooting on Extraction 2 feelin good and ready. Shout out to my team at @centrfit for giving me all the tools I need for a bulletproof rig.” Chris Hemsworth captioned his post.

Chris Hemsworth drew a lot of praise for his impeccable look and efficacy of the CentrFit app in the comments section. Notable MMA fighters Donald ‘Cowboy’ Cerrone and Zhang Weili, along with Hemsworth’s Extraction co-actor Rudraksh Jaiswal, are some of the celebrities that appreciated the Australian actor in the comments.

The 38-year-old actor has gone through several body transformations for his movie roles. A large number of fitness enthusiasts look up to him as a fitness role model. Hemsworth has kept his fans updated with his training program to achieve the physical shape required for the Extraction sequel.

Back in September, Chris Hemsworth revealed in an Instagram post that he was transitioning from weight training towards bodyweight training concentrated on improving agility strength, and speed. Hemsworth then went on to share his workout with his followers and appealed to them to try it out.

In his most recent Instagram photo, Chris Hemsworth looks motivated and ready to go. However, in the video posted on his Instagram last week, Hemsworth was in a completely different place mentally. The Thor actor admitted to waking up feeling unmotivated after a couple of celebratory drinks over the weekend. Therefore, Intent on getting his motivation back, Chris Hemsworth then put himself through a series of arduous workouts.

“I can tell you with the utmost confidence that the simple add of exercise in your daily routine will not only add a big ol smile on your dial. It’ll improve every aspect of your life.” Chris Hemsworth wrote in the caption to his post.

Here are the must-have for everyone who lift:

Hemsworth portrays the character Tyler Rake, a black market mercenary, in the movie Extraction. The movie received praise for its stunt scenes and Hemsworth’s electric presence. As revealed by the Thor actor, the shooting for the movie will begin in six weeks. The release date of the movie is unknown at the moment.

However, looking at Chris Hemsworth’s preparation for the role, it seems we will be in for another electric performance from the Australian actor.

Australian actor Chris Hemsworth is recognized for having one of the fittest builds in Hollywood today. In a recent Instagram...