Hany Rambod Believes Hadi Choopan Is Heavier, Super Conditioned And Ready To Take His Physique To Another Level This Year

Rambod says The Persian Wolf is 'in the best off-season shape he has ever been in.' 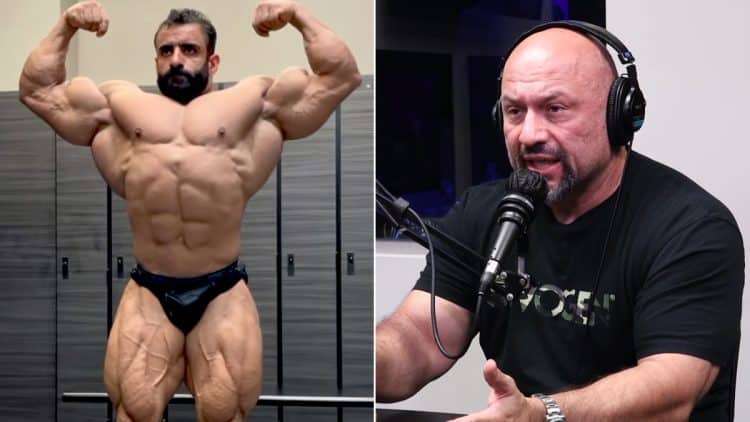 Famed bodybuilding coach Hany Rambod shed light on Hadi Choopan’s preparation for the 2022 Olympia and the difficulties he has to face for competing out of Iran. “The Persian Wolf” is an Iranian bodybuilder that competes in the Open division of the IFBB Pro League. Over the years, Choopan has earned the reputation for being one of the most consistent and dedicated professional bodybuilders.

The 34-year-old made his open division Olympia debut with a third-place finish at the 2019 Olympia. He slipped in rankings at the 2020 Olympia and finished fourth. Choopan finished third at the 2021 Olympia under coach Rambod’s tutelage behind champion Big Ramy and runner-up Brandon Curry. He received the People’s Choice Award at the 2021 Olympia.

Choopan is expected to compete at the 2022 Olympia next, and the results of his hard work are evident in some of his most recent physique updates. Following the outcome of the 2021 Olympia, Coach Rambod insisted that The Persian Wolf had the best physique on stage at the event. During the most recent episode (#67) of his ‘The Truth’ podcast, Rambod shed light on different aspects of training Choopan and all the ups and downs associated with his geographic location.

Choopan posted a few physique updates in recent weeks that show he has definitely put on size and density. Rambod said that while Choopan’s growth is impressive, they have a difficult time training together as the latter is based out of the south-central Iranian city of Shiraz. Additionally, The Persian Wolf only speaks Farsi, making it harder to communicate with him.

“It’s not just a language barrier that we deal with… Because I do speak Farsi so I can send him certain things. But I don’t type Farsi. So then he has to either give it to his son or his wife to listen to my Farsi, my Americanized Farsi…” Hany Rambod said.

Many bodybuilders that train in and around UAE have the ease of traveling to and fro America. However, that is not the case with Choopan. Due to the travel sanctions and other reasons, frequently traveling between the USA and Iran is difficult. While speaking about this, Rambod said:

“With the fact that he cannot come here whenever he wants… Because you see Big Ramy training with Dennis James, they could be anywhere and meet up. They don’t have these kinds of problems. I think that’s very difficult and it’s very sad. I wish we had the ability to train whenever we wanted to.”

These circumstances leave a tiny window for Rambod to train Hadi before he takes the Olympia stage. That window can get even smaller depending on the visa process and other legal procedures that Rambod needs to follow. While expanding further on this topic and when Choopan will come to the USA for the 2022 Olympia, Rambod said:

“It’s yet to be determined (for the 2022 Olympia) but in the past, it’s been several weeks. But we have done anywhere from one and a half days i.e. 2020. He literally came a day and a half before Olympia. He was still holding water from the flight right before pre-judging where we had to turn his water and everything because he had such a long flight getting into Orlando… Then we had it where last year he was able to come longer where it was like three or four weeks.”

“So that was really nice to be able to train, to shoot content, and show the people out there what he is doing… Because he is so behind a wall over there. He’s not in Dubai, he’s not here, and somewhere that’s more accessible.”

“With all those things said, he still does a great job training by himself, and I am doing the best I can to be able to coach him remotely.”

Anyone that has seen Choopan’s recent physique updates could tell he seems to have improved a lot more than last year. However, there is more than what meets the naked eye. While speaking about the progress he has made this off-season, Rambod said:

“I think that he is in the best off-season that he has ever been in. I think that he is heavier and he is super conditioned. And I feel that he is really hungry to be able to take his physique to another level for this year. So he is more focused than ever. It’s just a shame that we can’t really highlight that as much. So I’m trying to get more footage of him…”

Given the circumstances Choopan has to fight to make it to the Olympia stage, it would not be surprising if he dethrones Big Ramy at the 2022 Olympia, scheduled for Dec. 15-18 in Las Vegas, NV.