Hunter Labrada takes fans through the second arm day from his new eight-week training split leading up to the 2022 Olympia. 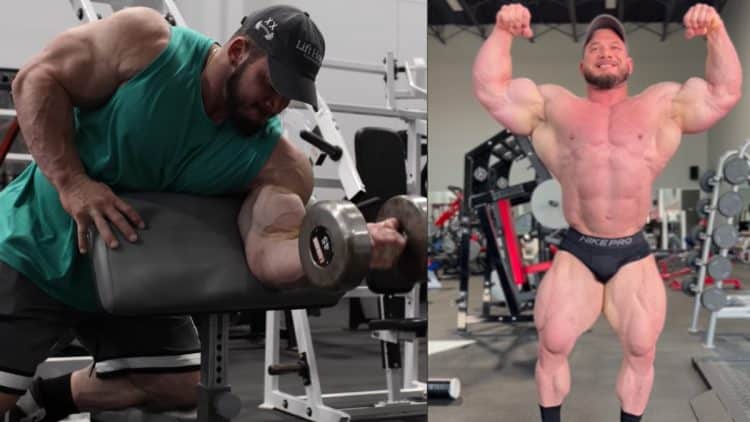 Hunter Labrada is showing no signs of slowing down even though he is yet to begin his 2022 Olympia prep. Currently, the bodybuilder is focused on adding volume and intensity to his workout routine to pack on size.

Labrada launched himself into 2020 Olympia after his victory at the 2020 Tampa Pro. At his debut at the 2020 Olympia, Labrada finished in the eighth position. He returned the following year and leaped four ranks to secure a fourth-place finish.

Undoubtedly, Labrada wants to repeat the feat and jump four more positions at the 2022 Olympia to secure the gold, beating reigning champion Mamdouh “Big Ramy” Elssbiay. To make this dream a reality, Labrada is focusing on a new split.

On July 23, 2022, Hunter Labrada went into detail about his cable-focused arm day on his YouTube channel. He explained each exercise in-depth and suggested alternatives for those who do not have access to cable pulley machines.

Hunter Labrada kicked off his arm workout with a preacher curl for better biceps isolation.

“Couple of things you got to keep in mind about this exercise. You want to keep your upper arm smashed into this [slanted surface]. What you don’t want to do is make your elbow like a fulcrum point and have your whole shoulder off of it. [You] want to think about keeping basically your entire humerus actively pulled back.”

“Second thing you want to keep in mind is we want to have the armpit of your elbow [bicep tendon] always facing up, straight up. So, 12 o’clock. I really pay a lot of attention to getting my body positioned to where everything is lined up — shoulder, elbow, wrist, all in a straight line.”

“Bottom of the exercise, we’re going to stretch as far as we can while keeping the bicep active.”

By “keeping the bicep active,” Hunter Labrada means that if you allow your arm to fully extend at the bottom, the focus moves from the target muscle to the tendons, which is something you want to avoid.

Finally, Labrada has one last piece of advice for the exercise, “Think about finishing with your pinky up. What that’s going to do is it’s going to supinate your wrist, and it’s going to maximize the bicep contraction.”

Furthermore, he emphasizes rotating the entire forearm to turn the pinky upwards instead of using only your wrists.

“I’d recommend doing them [bilateral] until you get really strong at them. And then, I’ll show you the way I’ve started doing it. Probably in the last six months or so the load got heavy enough that it wasn’t really working doing both arms at the same time.”

“The biggest thing for this is obviously we’ll have them cross. Having them cross really affords us proper joint alignment. You’ll see the cables running down my shoulder, elbow, and wrist as I extend. The biggest things you want to keep in mind in this are — you want to keep your shoulders down and back. Your scapula is retracted throughout this whole movement, and you want to think about this simple elbow flexion. Only jab if your tricep is to extend your elbow. So, the more flexion you put in it, the farther it has to extend under greater weight.”

Labrada reiterates the importance of keeping the upper arm pinned in position without any humerus movement. Additionally, he advises a stagger stance and a slight hinge at the hips.

Pro tip: You can place the resting arm on the machine pillar for balance as you continue extensions with the other.

At the beginning of the video, Labrada mentioned the two biceps movements would be peaches curl and chest-supported cable curl. While the preacher curl enables overloading the shortened position, the latter enables loading the lengthened position.

“Couple of things with the exercise. You know, if you’re going to do it chest-supported, how far do you wanna have the bench scooted up? You want to have the bench scoot up, or you know, if you’re not going to use the bench, you’re just doing to stand because that isn’t a bad option either. You want to be far enough forward for your upper arm. Just pull back like 10 to 15 degrees. You don’t need it like way back.”

It’s imperative to keep the arms behind your torso when doing chest-supported curls since that’s what helps train the long biceps head.

The second tricep exercise for the day was overhead cable cuff extension. Labrada prefers this exercise over other extension movements as it’s the only movement that enables the humerus to pass a 90-degree angle to the floor. Moreover, this extension variation does not hurt his elbows or shoulders.

“I really like these. You know, they’re really stable. You’re really able to lock everything in and maximize elbow flexion.”

Hunter Labrada finished the arm workout with two ab exercises. His goal is to have a much better set of abs at the 2022 Olympia, hence, he’s working on his core every two to three days.

You can see the full workout video here:

The bodybuilder is following his newest eight-week split to add size before switching routines in prep for the 2022 Olympia, scheduled for Dec. 15-18 in Las Vegas, Nevada.

Hunter Labrada aims to make a mark at the 2022 Olympia with the best packages he has ever brought to the stage. Fans will be eager to see if this new split gives him the push he requires.