Speaking with Dennis James, King Kamali casts doubt on Lunsford's potential in the Open: 'he can't beat Hadi Choopan, I don't think he beats Ramy' and 'I don't think he will beat Brandon Curry.' 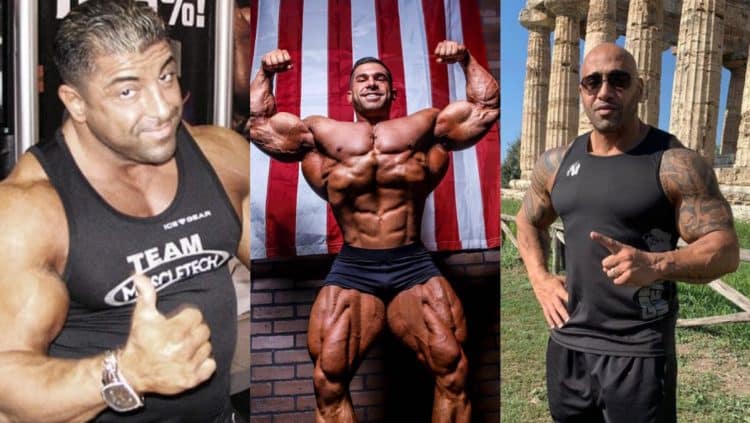 With speculation growing that 212 Olympia champion Derek Lunsford will switch to the Open, veteran bodybuilders, Dennis James and King Kamali gave their take on the situation. In a recent YouTube video, James and Kamali discuss how Lunsford will fare against the top five at Olympia in the Men’s Open division.

Bodybuilder Derek Lunsford turned the world upside down following his guest posing appearance at the 2022 Pittsburgh Pro. He replaced Big Ramy, who was absent from the show for undisclosed reasons. Taking to the stage, Lunsford stood against Nick Walker, Hunter Labrada, and Brandon Curry, all of which made the top five at 2021 Mr. Olympia last year.

Despite competing in a lighter class, Lunsford’s size was comparable next to some of the world’s best Men’s Open competitors, prompting many to discuss why Lunsford should make a switch to the Open.

Lunsford’s coach, Hany Rambod made it clear in May that they are having to consider moving divisions. He added that it’s becoming very difficult for Lunsford to make the weight for 212 bodybuilding. Olympia President Dan Solomon echoed Rambod’s concerns and explained that Derek is in an unprecedented situation. Solomon clarified after speaking with Lunsford and the team, he was ‘nowhere near 212’ at this point in the off-season.

In 2020, Mamdouh ‘Big Ramy’ Elssbiay received his special invitation to Olympia. He fell short of qualifying for the event based on points after he was unable to attend a show as a result of a positive Covid-19 test. Olympia brass expected Ramy to qualify and thus deemed it appropriate to give the Egyptian native a special invitation.

As it stands, Lunsford is only qualified to compete in 212 at the upcoming Olympia show. However, if he wants to compete in the Men’s Open division, he will need to earn an invitation by winning a contest or by receiving a special invitation. With Lunsford’s fate looming, veteran bodybuilders, Dennis James and King Kamali discuss his chances at 2022 Olympia assuming he switches to the Open.

Dennis James on Lunsford Switching to The Open: ‘He’s Already Training for This Right Now, I Don’t Think There’s Any Confusion’

In a round table discussion on YouTube, James, King Kamali, and Milos Sarcev gave their thoughts on the Derek Lunsford situation.

Dennis James revealed Lunsford was weighing around 260-pounds in Pittsburgh and said that’s a lot of muscle to lose to make 212 in five months.

Sarcev mentioned that Dan Solomon is unsure if Lunsford can make 212 in a safe manner this year.

“So that’s the point that King was saying. So heavy — 265… and now going down to 212, right. So, this is Dan Solomon’s point. Is this healthy and what if he doesn’t make it?” Milos Sarcev posited.

In addition, Sarcev maintained that lightweight competitors in the past have fared well at Olympia contests against heavyweight bodybuilders.

“Back in the day when they have a lightweight and heavyweight Olympias, in six outings, four times lightweight won over heavyweight. Only Arnold [Schwarzenegger] beat Franco [Columbo] but Frank Zane was beating everybody else. Four out of six times, the lightweight champ won. Sarcev explained.

From James’ point of view, he believes Lunsford and his team already know which division they are training for to compete in later this year.

“They already know what’s going on. I think Hany, Derek, and their pals already know where he’s going to compete this year. And if he is in the Open, he’s already training for this right now. I don’t think there’s any confusion right now.

I think they already have a deal and it’s just not public right now. This is just my opinion guys. Don’t go out there screaming. We are five months out from the Olympia. I know five months out from a show what I’m training for. There is no way I’m going to try to make 212, and if I can’t make it, then I’m just going to try to rebound and go in the Open. No. It doesn’t work like that.” Dennis James said.

Can Derek Lunsford Make the Top Five at 2022 Olympia?

In the next segment of their discussion, James and King Kamali discussed how Lunsford would do at 2022 Olympia and which competitors he could defeat.

When asked who he believes Lunsford won’t defeat this year, Kamali quickly listed consistent top three finisher Hadi Choopan. Dennis argued that Lunsford could ‘possibly’ expose a few flaws of Choopan when they stand next to each other. Milos added that Lunsford’s arms, v-taper, and x-frame are some of the reigning 212 champion’s best weapons.

King Kamali is adamant that Lunsford will not only have trouble against Choopan but also against reigning Mr. Olympia Big Ramy and Brandon Curry.

“Now. Okay listen, I’m not disagreeing with you guys here. I’m just saying there is going to be a few guys in trouble. So, he can’t beat Hadi. He can’t beat I don’t think he can beat Ramy if Ramy is in shape and I don’t think… I don’t know, I don’t think he will beat Brandon [Curry] if Brandon is in the shape but I think he fares very well with all the other guys.” King Kamali said.

King Kamali on Derek Lunsford Beating the Top 5 at 2022 Olympia: “Too Fast, Too Much Pressure, Too Much Anxiety”

Kamali believes Lunsford is a fantastic bodybuilder but argued that a move into the Open right now would be coming too fast. He believes the improvements Derek needs to make for the Men’s Open at Olympia will take more than one year.

“I don’t think he can beat any of those guys. Listen, I’m going to use a quote that Dorian [Yates] said a while back. Everyone said to Dorian ‘if Nasser [El Sonbaty] gets a back, he’ll beat you next year.’ Dorian’s response was, ‘he’s been training for 18 years, what makes you think he’s going to get a back in one year?'” Shahriar Kamali said.

I’m going to use that in kind of manipulate it to Derek. Derek is a fantastic bodybuilder. He looks great. Great symmetry. He’s made some great improvements, okay? Shahriar Kamali shared. “When he stands next to the top five guys in the Open class of the Olympia he’s going to look small.”

Kamali believes Lunsford will struggle with Olympia’s top five on the basis of size and muscularity. The veteran bodybuilder said there will be an ‘obvious size difference’ if/when he takes to the stage against other Men’s Open competitors.

“There’s going to be an obvious size difference from a guy who is jumping up from the 212 into that. Hadi and with his conditioning and his muscularity, Brandon with his shape and muscularity, Ramy with his size, and I think Nick… Nick is improving. So, you’re going to see a better version of Nick. As a fan, I would love to see this battle on stage but I think for this year it might be too fast, too much pressure, too much anxiety.” Shahriar Kamali said.

One of the sport’s biggest stars Nick Walker believes Lunsford has the potential to defeat him, but doesn’t think it will happen this year. While Walker argues Lunsford has the shape to give many top bodybuilders trouble, he doesn’t believe the 212 champion has enough size to ‘overpower the top five.’ Lunford and “The Mutant” have trained with each other in the off-season and Walker doesn’t deny how dangerous Lunsford will be on stage.

Four-time Mr. Olympia Jay Cutler also mentioned that he thinks Lunsford will make the top three at 2022 Olympia should he get the chance to compete in the Men’s Open division. While the bodybuilding veterans expect Lunsford to do well at Olympia, Kamali thinks he will struggle with the size of competitors if he ends up in the Open.

Gym Bro Skills: How to Be A Good Spotter