Iron Biby has once again surprised everyone, but this time it was with a massive deadlift. 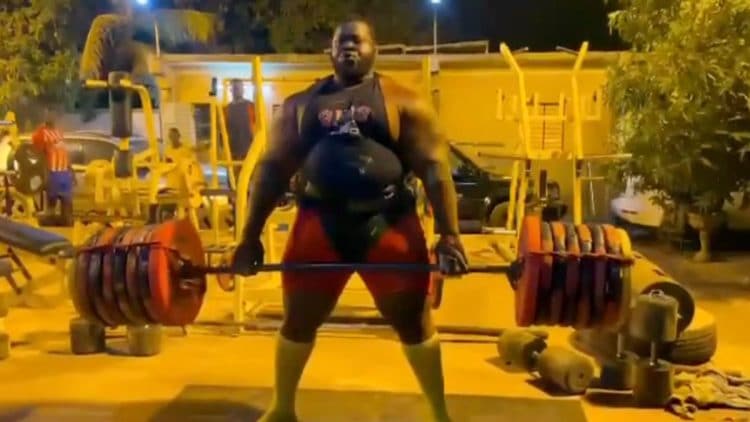 Cheick “Iron Biby” Sanou is most often associated with his overhead strength. However, he has proved throughout the years that he is a man of many skills. That being said, Iron Biby is not often seen competing in the standard Strongman shows, but often only comes in to break some kind of an overhead press World Record. He is not recognized enough for his strength in other events because of his legendary overhead power. Iron Biby has now shared a new video on Instagram, which sees him deadlifting 400 kilograms (881.8 pounds) for two repetitions.

To make his feat of strength even more impressive, Iron Biby performed the two rep 400-kilogram (881.8-pound) deadlift on a stiff bar. This bar made the lift significantly harder, as he couldn’t pull the slack out of the bar, while the lockout was harder as well. Iron Biby’s deadlift also seems to be raw by Strongman regulations, as he only used a lifting belt and wrist wraps. He obviously performed the lifts with a conventional stance, since sumo is not allowed in Strongman.

Iron Biby possesses one of the heaviest barbell overhead presses in history, as he lifted 260 kilograms (573 pounds) in training. In the Guinness Book of World Records, Iron Biby is listed as the person who overhead pressed the most people.

Iron Biby attempted to once again break the Log Lift World Record earlier this year, but he was unsuccessful and suffered some kind of an injury. However, he now seems to be recovered and ready for new challenges.

It will be interesting to see Iron Biby compete once again, and if the competition happens to consist of both a log event, and a deadlift one, he will be absolutely unstable. His chances of winning have grown quite a bit, so his next competition could also be his first career victory.