Ivan Makarov states that he is ready to break the World Record after scoring one of the heaviest official deadlifts in history. 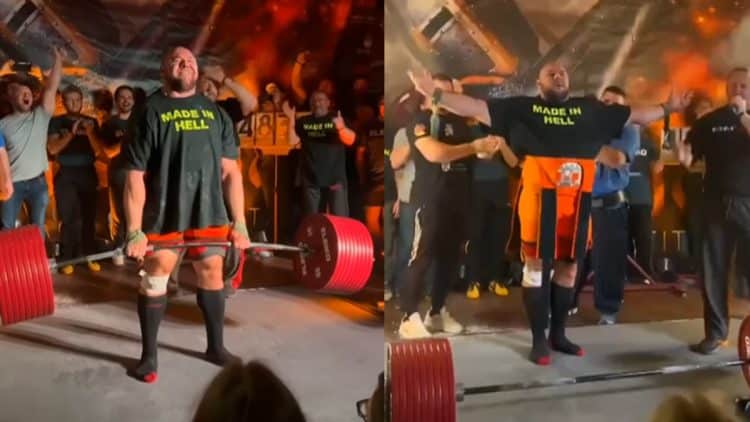 In a surprise to almost everyone, an incredible roster of strength athletes appeared at the 2022 Eisenhart Black Competition, which took place On December 3rd, in Bavaria, Germany. A mix of Strongman, powerlifting and other athletes showed up to compete in the push-pull competition, meaning that only the bench press and deadlift were on the repertoire. One of those was Ivan Makarov, who won the deadlift portion of the meet. While he was the main favorite coming into the competition, Ivan blew everyone’s mind by bringing his best physical shape. This resulted in a colossal 483-kilogram (1,064.8-pound) deadlift.

Although he did not confirm or specify, this 483-kilogram (1,064.8-pound) pull seems to be Ivan Makarov’s heaviest deadlift done in an official competition. Ivan’s deadlift was completed in accordance with all Strongman rules, which included wearing a deadlift suit, lifting straps, and a lifting belt. In addition, he performed the lift with a conventional stance and in his socks.

As is evident by looking at the video, Ivan Makarov made the 483-kilogram (1,064.8-pound) deadlift look like a warm-up. Prior to this, he had some difficulty with the lockout portion while lifting heavier loads, but that was his greatest strength this time.

Seeing that Ivan Makarov was within a swinging distance of Hafthor Bjornsson’s 501-kilogram (1,104.5-pound) Deadlift World Record, many people wonder why he did not attempt to break it. According to a translation of Ivan’s Instagram caption, he even thinks that he was able to break the World Record. However, Ivan wants to raise awareness for the record, so he wants to break it at the 2023 Giants Live Deadlift World Championships.

Ivan Makarov has been chasing the World Record for multiple years now, but it is evident that his efforts are paying off. His heaviest career deadlift is 490 kilograms (1,080.3 pounds), but seeing that he performed it in training, it was not official. Therefore, when Ivan pulled 483 kilograms (1,064.8 pounds) at the 2022 Eisenhart Black Competition, he commented that “this was the best day of his life”.

Ivan Makarov has competed in seven International and National Strongman competitions, but has not managed to win or stand on a podium in any of them. However, his deadlift prowess is what made him famous and recognizable. Ivan does have a few more very impressive events in which he is amongst the greatest in the world. For example, he recently shared a 190-kilogram (418.9-pound) strict overhead press PR.

Related: Ivan Makarov: “I Want To Set A World Deadlift Record And Win The WSM!” (EXCLUSIVE)

The 2022 Eisenhart Black Competition featured some more big names as Rauno Heinla, Mikhail Shivlyakov, and John Haack also took part. However, Ivan was still the main star of the show, as his 483-kilogram (1,064.8-pound) deadlift is one for the history books.