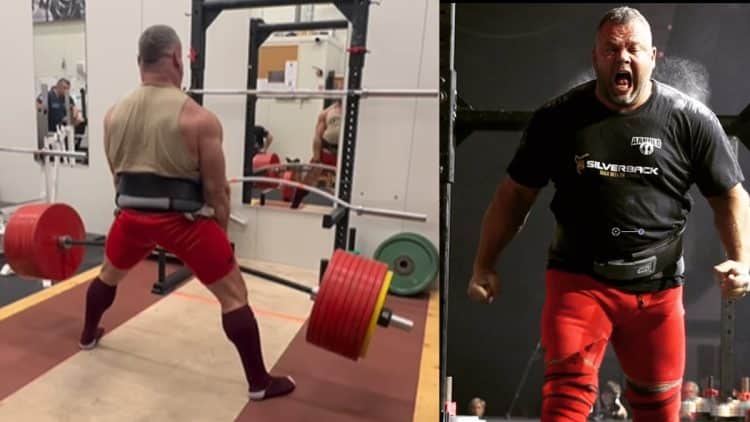 Rauno Heinla turned 40 this year, but his recent strength gains are comparable to those of an individual in their mid-20s. He appears to be in the best shape of his life right now, which is especially evident in his deadlifts. Rauno even set a new Masters World Record Deadlift of 476 kilograms (1,049.4 pounds) at the 2022 Giants Live World Open just two months ago. Recently, he has been experimenting with his deadlifts, having tried the sumo stance during his training session. Additionally, Rauno has posted a video to Instagram where he can be seen sumo deadlifting 450 kilograms (992 pounds) with precision.

Despite the fact that the sumo stance is not allowed in Strongman competitions, something lured Rauno Heinla to attempt it. It turned out to be a good decision since Rauno proved to be a beast with this technique as well. While there are still a few details he has to perfect, like achieving a full lockout, Rauno still performed one of the heaviest sumo deadlifts in history. He did not wear any shoes, but equipped himself with a lifting belt and lifting straps. Heinla also hinted at something that will happen in the future, but he did not specify what it might be.

While it can be the case that Rauno Heinla decided to try sumo deadlifting out of plain curiosity, some other factors might have led him to this decision as well. For example, powerlifters Krzysztof Wierzbicki and Jamal Browner have both deadlifted 500 kilograms (1,102.3 pounds) with a sumo stance, so Rauno might be building up to that as well. Seeing that he is already capable of pulling 450 kilograms (992 pounds), a few minor improvements will likely propel him toward a half-ton pull.

It seems that sumo was the only variation of deadlifts that Rauno was not amongst the top lifters in the World, which has now changed. Apart from the standard conventional and sumo deadlifts, Rauno also holds the Silver Dollar Deadlift World Record of 580 kilograms (1,278.7 pounds). He set this record in early June of this year, so the past few months have been a run of brilliant results for him.

Speaking of Rauno Heinla’s results, he has taken part in 48 International Strongman competitions over the course of the last 13 years. He won four competitions, but also made a name for himself through massive stationary lifts. Rauno had one appearance at the World’s Strongest Man contest in 2011, but didn’t get through to the finals.

Rauno Heinla competed at the 2022 Giants Live World Tour Finals just six days ago, so he is definitely not fully recovered yet. However, that did not stop him from deadlifting almost 1,000 pounds with a technique quite unfamiliar to him. With some more rest and practice, Rauno will almost certainly lock out 500 kilograms (1,102.3 pounds).