Due to an illness just days before the contest, Hafthor 'The Mountain' Björnsson fell just short of his goals. 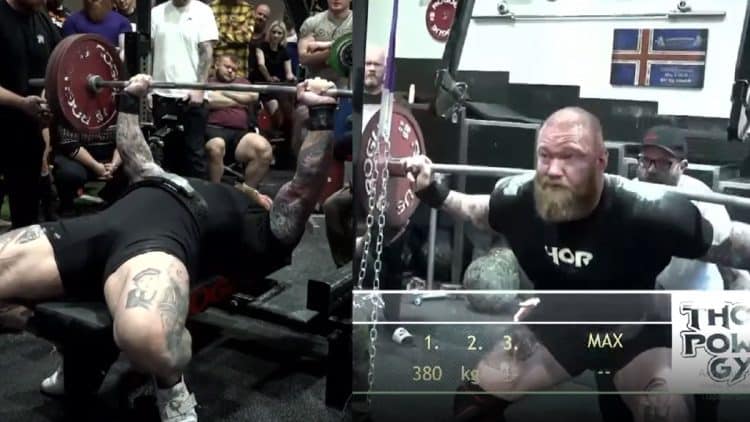 On December 3rd, 2022, Hafthor Björnsson returned to powerlifting and entered a competition. It took place at his home gym in Iceland and he named it 2022 Thor’s Christmas Powerlifting Meet. Björnsson was not chasing after any records, but just wanted to Total 1,000 kilograms (2,204.6 pounds) across all three lifts. He was on the brink of succeeding in achieving his goal, but ended up with a 970-kilogram (2,138.5-pound) Total due to an unsuccessful final deadlift attempt.

Hafthor Björnsson had been preparing for this powerlifting competition for a few months now, however he encountered some setbacks in the final days before the competition. Björnsson got sick and lost a substantial amount of weight, which also impacted his performance at the meet. His bodyweight at the time of the competition was 162 kilograms (357.1 pounds). For reference, Hafthor weighed 5 kilograms (11 pounds) less than last week.

The first event of Hafthor Björnsson’s competition was the squat, where he scored a 380-kilogram (837.8 pounds) on his second attempt. Björnsson used a lifting belt and knee wraps to complete the lift and hoped to add a few more kilograms on the final attempt. So, he loaded 400-kilograms (881.8 pounds), but was sadly not able to squat that much weight.

Hafthor Björnsson then moved on to the bench press and crushed all three of his attempts. His final score came out to 210 kilograms (463 pounds), which is amazing to say the least.

Upon completing his bench press attempts, Hafthor Björnsson moved on to his favorite event, the deadlift. Björnsson is the All-Time Deadlift World Record holder with 501 kilograms (1,104.5 pounds), but he decided to follow powerlifting rules for this competition. So, without using a deadlift suit or lifting straps, Hafthor still managed to deadlift 380 kilograms (837.8 pounds).

This was Hafthor Björnsson’s sixth powerlifting competition and his fifth victory. Although he did not score new PRs, it would not be reasonable to compare the current transformed Hafthor to his 2018 edition when he weighed over 195 kilograms (430 pounds). In addition, Hafthor has been focused on boxing for the past two years, which means that he has only recently returned to proper weight training.

If he did not get sick just days before the meet, Hafthor Björnsson would most likely crush the 1,000 kilograms (2,204.6 pounds) milestone. However, this is just the beginning of Hafthor’s comeback, as he also hinted towards a Strongman appearance as well. Björnsson is the 2018 WSM, 3x Arnold Strongman Classic champion, and a 5x Europe’s Strongest Man. He already made a partial comeback at the 2022 Rogue Invitational, where he further improved his own Weight Over Bar World Record and set the mark at 20-feet 3-inches.