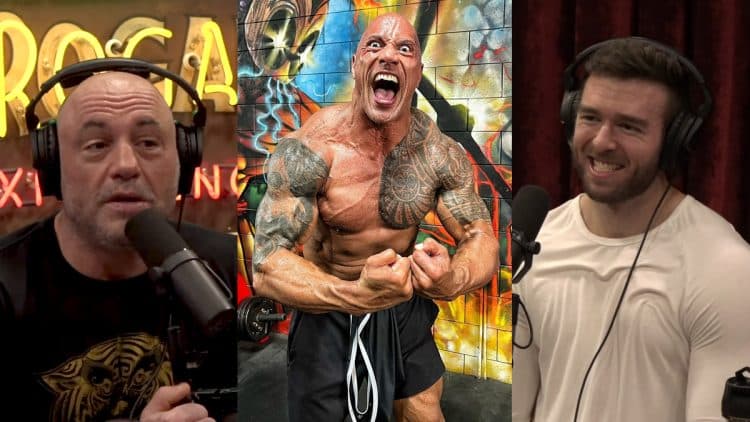 Dwayne ‘The Rock’ Johnson is one of the most popular celebrities on the planet who is renowned for his dedication to maintaining high levels of fitness. In episode 1905 of the massively hit podcast show Joe Rogan Experience, Rogan called on Johnson to come clean about his use of steroids to get jacked.

The Rock first gained attention as a pro wrestling standout in the WWE, where he pioneered the ‘Attitude Era.’ After a stellar run in the promotion, he decided to leave the wrestling ring for the silver screen. Johnson found immense success in Hollywood and became a proven superstar with multiple blockbusters under his belt.

Johnson boasts over 350 million followers on Instagram, making him one of the most followed people on the planet. He prides himself on being the hardest worker in the room and seemingly stays in shape throughout the year. He has one of the best builds in Hollywood and regularly inspires his fans with motivational training updates, often shot at his home gym called ‘Iron Paradise.’

In September, The Rock gave a look into his preparations for the titular role in the latest DC project Black Adam. Johnson showed off his humongous leg muscle development in a grueling quads workout that included five rounds of modified step-ups.

Johnson collaborated with NFL player Aaron Donald for a brutal workout session at the Los Angeles Rams training facility two months ago. The pair bonded over the similarities in their upbringing and kicked off the session with a grueling one-arm dumbbell row superset.

There is a lot of speculation about whether The Rock is natty or not. While Johnson has credited his insane work ethic and discipline for his monstrous physique, UFC color commentator Rogan is convinced Johnson is juicing to get ready for his roles.

In a recent episode of the Joe Rogan Experience, Rogan hosted Derek of More Plates More Dates (MPMD) to discuss The Rock’s claims of being natty and recommended he come clean after the Liver King got exposed for his steroid use.

Rogan: “The Rock should come clean right now. He should make a video in response to the Liver King video like, ‘I need to talk to you because The Rock’s been lying.’ There’s not a f**king chance in hell he’s clean, not a chance in hell as big as The Rock is at 50.”

“The point is you can’t even get there with HRT (hormone replacement therapy). That’s not HRT. He is so massive and he’s so different than he was when he was 30.”

Derek: “He’s a genetic marvel as is anyways when he was natural. So to have all this 30 years later like you’re in better form when you were inn your 20s. It’s just f**king obvious.”

Rogan explained that he was not against the use of gear or HRT but stressed the importance of being honest with your fanbase.

Derek weighed in with Johnson’s prior claims and made the case for why The Rock is likely on the juice.

Derek: “He said in one instance that when he was 18, him and his friends took something and it gave them gynecomastia, and then he never touched it again.”

Rogan: “That seems a little suspect… Well, him saying he did something once when he was 18 and got gyno, how did you take care of it? What did you do to get rid of the gyno? You have to have an operation. It’s not a fluid it’s a gland you have to get removed.”

“If he’s saying that’s all he has ever done, that’s crazy talk. Also, when you look at his physique in the early days of the WWE, he was very athletic, great genetics, big strong guy but he didn’t look anything like he does now; the mass and the striations and the vascularity.”

Derek: “At that point, it’s weird. It’s kind of half tell the truth but not at all at the same time.”

Last month, Dwayne ‘The Rock’ Johnson shared a ‘killer’ leg day finisher workout that he liked to utilize at the end of a busy week. The workout consisted of 5 monster sets of sumo squats with 3-second negatives and a 1-second pause at the bottom with a 100lb dumbbell.

Check out the full podcast:

As popular as Johnson is for his insane workouts, he is also very famous for his epic cheat meals. Fitness influencer Will Tennyson recently tried out a diet completely made up of Johnson’s epic cheat meals for five weeks and reported positive findings at the end in terms of his performance. The Rock is still going strong at 50 years old, and he doesn’t seem to be slowing down anytime soon.