Weighing 320lbs, Martyn Ford has issued a warning to Sajad Gharibi AKA The Iranian Hulk ahead of their boxing match. 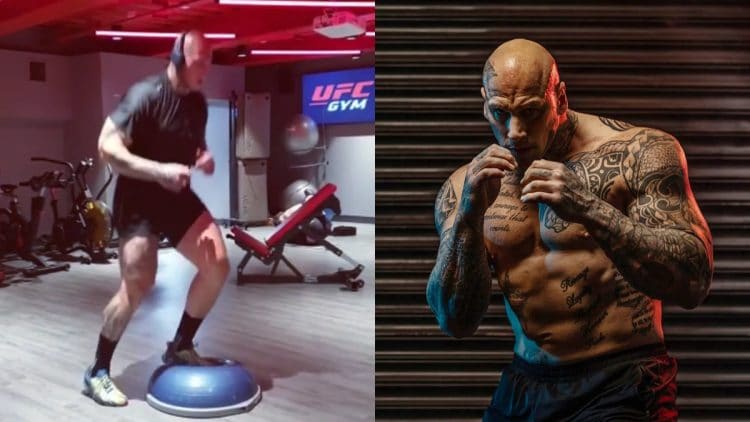 Martyn Ford and Sajad Gharibi, known as Iranian Hulk, are slated to fight in the boxing ring next month. Ahead of the violent clash, Ford has warned Iranian Hulk and released training footage showing him practice footwork drills.

The anticipated boxing match was originally expected to take place on April 2, but the event was postponed until April 30 due to injuries. Taking place inside the O2 Arena in London, England, anticipation for the fight has continued to build. Gharibi has utilized his huge social media presence to help promote and draw attention to his fight with Ford.

Training sessions for the Iranian Hulk have been unconventional in preparation for the fight. Gharibi recently took full-blown punches to the body and shared the training footage online. In addition to punching concrete walls, the Iranian Hulk has also prepared his body for combat by fighting a group of men with grabs, throws, and trips.

After the pair of fighters met during the face-off last month, a size disparity was apparent. Ford, standing 6ft 8inches, labeled “The World’s Scariest Man”, towered over Gharibi. The face-off got heated and chaos ensued. Ford overpowered Gharibi and pushed him to the ground. In response, The Iranian Hulk attempted to take Ford to the ground but was unsuccessful.

Martyn Ford Agile At 320lbs Ahead of Boxing Debut

With his marquee boxing match four weeks away, Martyn Ford shared a video on Instagram showing off his agile footwork.

“Changing my narrative, building a beast from scratch, leaving nothing to chance …. moving well for 145kg, BUT we can always be better ….” Martyn Ford posted.

Ford has prepared methodically for his first test in ‘the sweet science’. Training with kickboxing heavyweight champion Rico Verhoeven, Martyn expressed gratitude to Rico for not holding back. Despite being pushed out of his comfort zone while taking damage, Ford saw the training session as educational.
As a close friend of Strongman standout Eddie Hall, Martyn was saddened after “The Beast” lost his boxing debut by unanimous decision to Hafthor Björnsson. In terms of size and power, the pair of titans appear to be comparable. Hafthor fired back after Martyn said he would knock him out, by saying “I think I’ll smash him”.  Thor tipped the scales at 322lbs for his boxing match with Hall, so each man would be similar in weight if a potential fight materialized.

Ford was given an extra four weeks to prepare for the contest, and fans are excited to see what kind of performance he turns in next month. Capping off a hard season of training, Martyn is keeping busy with footwork drills ahead of his battle with the Iranian Hulk.