Jay Cutler: 2022 Olympia Should Have Prioritized The Mens’ Open, ‘The Production Was A Mess’

Cutler is criticizing the dragged out 2022 Mr. Olympia production: 'it is absolutely ridiculous, why are you going to torture people to sit through certain divisions.' 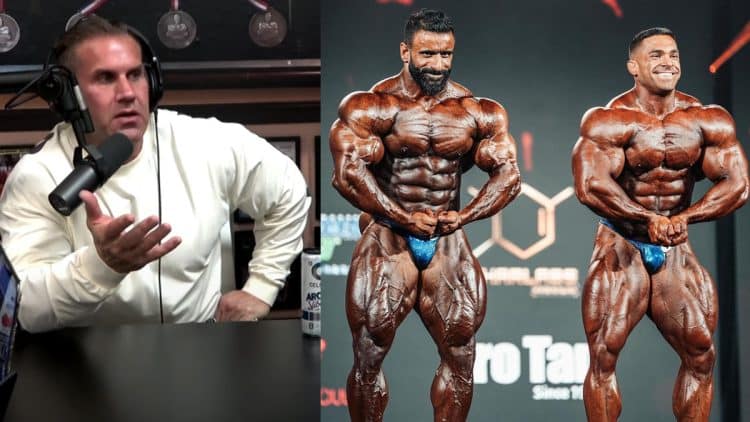 Bodybuilding legend Jay Cutler has a bone to pick with how the 2022 Mr. Olympia production went down a few weeks ago. Speaking in a recent interview, Cutler took issue with the dragged-out 2022 Olympia event and believes the Men’s Open division should be prioritized moving forward.

“On that note, would guys peak properly if there was a set time, hell yes,” Milos Sarcev added.

The 2022 Mr. Olympia competition concluded on December 17, 2022. This year’s event featured more athletes than ever before, totaling over 400 competitors, which spanned 11 different bodybuilding categories. The Men’s Open division was featured last for prejudging and the men weren’t on stage until after 11 p.m. Pacific Standard Time.

The pace of the event became a talking point for many in the sport, including coaches like Chris Aceto, who helped train Brazilian standout Ramon Rocha Queiroz for Classic Physique. Aceto said the majority of the crowd played on their phones instead of watching the live show on Friday. While he had athletes participating in the contest, even Aceto ended up falling asleep at 2022 Olympia.

Taking to a podcast, four-time Olympia Jay Cutler was the latest figurehead of the sport to criticize the ‘tortious’ 2022 Olympia production. Given his time as a dominant champion, Cutler believes the Men’s Open division should be prioritized moving forward.

Jay Cutler: ‘No One Is Going To Stay For The Live Shows Anymore, Men’s Open Should Be Prioritized’

According to Cutler, it was complete bullsh** that Men’s Open athletes were waiting backstage for hours on end. Many believe the extra time backstage likely contributed to several Open athletes being off or watery.

“Listen guys, let’s be honest: it’s complete bullshit that they are sitting backstage for hours on end. Remember, what time is this at [11 p.m. Pacific time]. This is absolutely ridiculous,” says Jay Cutler. “If his [Hadi Choopan] was a little better, now granted, I guarantee sitting backstage like that was total bullshit. This is still a fucking bodybuilding show.

So, I know they want to turn this into a production, and they have all these divisions, but people are coming to see the Men’s Bodybuilding. They are coming there for the Men’s Open. It should be the priority. It used to be the starting point for prejudging on Friday. If you remember, that’s how it used to be rolled out. That’s how it should have been.”

Despite other divisions competing at the Olympia, Cutler underlined that Men’s Open should rightfully be treated as the main attraction. In the future, Cutler predicts fans will leave if they are forced to sit through certain divisions.

“No one is going to stay [at Olympia shows anymore]. This is what I’m saying, it’s still a fucking bodybuilding show,” Cutler said. “Why are you going to torture people to sit through certain [divisions].”

Cutler’s solution to the problem would be grouping other divisions together on a separate day so the Men’s Open won’t have to carry them during live shows.

“I would end up training late just to be able to say, ‘okay, I’m going to peak at this time,’ to see what my body does,” Cutler explained. “At the same time, there’s certain divisions that need to be grouped together and not mixed in for the men to carry it, if that makes sense. If seven o’clock is the prejudging, that’s where it should start.”

Cutler and Sarcev are confident athletes in the Open would look ‘tremendously better’ if the show took place three hours earlier.

“So, would we have a better show three hours earlier? I think everyone would look tremendously better,” Sarcev told Cutler. “Yeah [I would have changed stuff if I knew we were coming out at 11 p.m.] I mean, this is unpredictable. What are you going to do. It should be [a] set [time]. Soccer match starts at whatever, basketball match, boxing match.”

Before ending the conversation, Cutler mentioned an alternative solution. He suggested chartering the bodybuilders from their hotel one hour before taking to the stage.

“I understand if they say, ‘hey guys, there’s a bus running over at 10 o’clock, so you’re going to have to sit in your room and be downstairs at 11 o’clock. We [would have the opportunity] to start preparing [properly] for this.

I went back there [at 2022 Olympia] — it was a mess. There was no space at all. You had to go outdoors to get into the backstage. It definitely wasn’t the right set up for Olympia production,” said Cutler.

In addition to talking about production, Jay Cutler addressed the shocking 2022 Olympia results. The former two-time champ, Mamdouh ‘Big Ramy’ Elssbiay came in off and finished fifth, but Cutler insists he’ll be back. Instead, the finals were determined between Hadi Choopan and former 212 Olympia Derek Lunsford. It was a close contest, but Choopan’s combination of fullness and conditioning led to his first Sandow.

The Open class underwent a huge shake-up. Given the length of the 2022 Olympia show, Cutler hopes the organization prioritizes the Men’s Open division in the future.

Clean vs. Dirty Intermittent Fasting — Everything You Need To Know