Cutler recapped the 2022 Mr. Olympia contest with Milos Sarcev and predicted Derek Lunsford could win next year with more fullness in his chest. 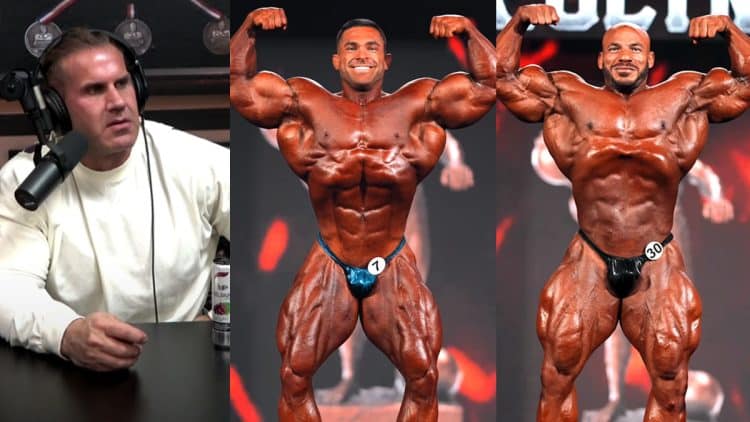 Jay Cutler is the latest bodybuilding veteran to address the surprising outcome of the 2022 Mr. Olympia contest. Speaking with Milos Sarcev, Cutler recapped the event, discussed Big Ramy falling to fifth place, and how Derek Lunsford could win the title at next year’s 2023 Olympia.

“I still think Ramy can push back [next year], if he gets back to being full and hard,” Jay Cutler shared.

After years of consistency in the IFBB, Hadi Choopan cemented his name in the history books by becoming the 17th man to win a Mr. Olympia title. The event saw four other competitors pull ahead of the former two-time champion Big Ramy. One of the biggest surprises of the contest was former 212 standout Derek Lunsford’s physique.

All season long, Lunsford and his coach Hany Rambod hinted at competing in the Men’s Open division. According to Rambod, Lunsford was nowhere near making weight for 212 throughout the off-season. In Sept., Lunsford accepted a special invitation to compete in the Open class and capitalized on the opportunity.

Just like his guest posing appearance at the Pittsburgh Pro, Lunsford wowed the audience with spectacular shape, definition, and symmetry. While he made a push for first place, he was unable to stop Hadi Choopan’s muscle maturity and finished runner-up.

A few weeks after the historic show, four-time Olympia Jay Cutler joined Milos Sarcev to talk about the aftermath. Additionally, the pair discussed how Derek Lunsford could take the title from Choopan next year.

Jay Cutler Recaps 2022 Mr. Olympia: “We Were All Wrong About Big Ramy”

Looking back on 2022 Olympia, Cutler addressed some of the predictions he made months prior to the show taking place. Like many other bodybuilding veterans, he thought Big Ramy would handily retain his title.

“We were all wrong about Ramy. Ramy did not produce like we expected. I mean it just goes to show man, like we talked about all these guys, and I talked in the beginning I think on and off camera that Andrew Jacked could come in and win the first time.

We talked about Derek Lunsford — could he be second, maybe not win it because we had this thing about Mr. Olympias never winning it on the first time once, except for the first time in 1965. Everyone on the planet thought Ramy was going to come in a repeat and win his third,” said Jay Cutler.

Sarcev was surprised by Ramy’s placing, especially since these issues didn’t prevent him from winning in 2020 and 2021.

“You said you were concerned about his back to the sense that [you thought] he might not even win. In a sense, you were right. But he won with the same problems last year, so you would assume they are not going to penalize him now if they didn’t last year and if he’s a little bigger and just as conditioned or better — then he would be the rightful winner,” Milos Sarcev explained.

Cutler highlighted that Ramy’s lats were one of his biggest problems on stage.

“The lats obviously, but I thought the biggest issue with Ramy was number one, his condition, but more importantly, he couldn’t open up his back. What was going on with his back,” Cutler asked.

“Now they [judges] are going to look, they’re going to scan his triceps,” Milos Sarcev said. “I would say [his back had] issues.”

Recently, Ramy’s close friend/training partner Dennis James opened up about the 2022 Olympia results. He insisted that Ramy looked flat hours before the competition.

“The fullness makes a big difference. The legs to me look better rounder like this instead of peeled down to the bone like the last couple of years,” Jay told Milos. “The legs were more straight but they were ripped but now, you see the shape is really coming out right. It’s more overwhelming.”

Before breaking down Derek Lunsford’s future Mr. Olympia potential, Milos Sarcev said Choopan will likely hold on to his title next year.

“I think that Hadi is going to win [2023 Olympia],” says Sarcev. “He is always in shape. He trains like a maniac. He lives breathes bodybuilding and in Iran, bodybuilding is a popular sport. Imagine, he’s the best bodybuilder in the world, is he going to be more motivated or less. He’s going to bring more polish and probably another two, three, four pounds, how are you going to beat that?”

Sarcev and Cutler echoed that Derek Lunsford’s path to an Olympia victory will depend on bringing more volume and a harder chest.

“Front double biceps he’s super competitive and he could possibly win [for the next two years]. Front lat spread, he needs a harder chest. Shoulders yeah. He’s going to need it yeah, because Hadi has monstrous thickness and quality. He’s going to lose that pose.

Okay, but he’s going to beat him with shape, and maybe he’s going to beat him from the back, yes, quarter turns. A few judges had him winning, don’t forget that,” says Sarcev. “Now, he’s proven himself. I didn’t actually think, I told you, I don’t see him in the top six. You were insisting and said he could get as high as second, and you were right. I didn’t expect him to be so competitive and so big when he came out.”

Another bodybuilding veteran to share his thoughts on the contest weeks after was Kevin Levrone, who earned runner-up on the Olympia stage four times during his career (1992/1995/2000/2002). Levrone believes Big Ramy gave the judges an excuse to penalize him. Moreover, he said most of the competitors at the event lacked true conditioning.

RELATED: Derek Lunsford Issues Statement After Earning 2nd Place at 2022 Mr. Olympia: ‘I Can & Will Be Better’

Reflecting on the 58th Olympia Weekend, Cutler believes Big Ramy can make a plausible comeback next year. As for Sarcev, he maintains the 2023 Olympia title will be determined by another battle between Lunsford and Choopan.