Buendia has his eyes on the Men's Physique title Erin Banks earned a few weeks ago at the 2022 Mr. Olympia contest. 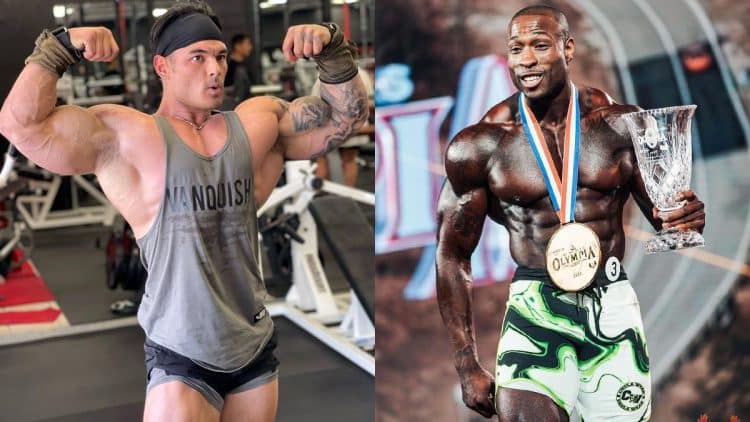 After the smoke cleared at 2022 Olympia, Erin Banks walked away as the newly crowned Men’s Physique champion. In an Olympia TV interview, former four-time Men’s Physique Olympia Jeremy Buendia assessed Bank’s performance and opened up about his 2023 bodybuilding comeback.

This isn’t the first time that Buendia and Banks sparked up hostility. In September, the Men’s Physique standouts started beefing with each other. However, at the time, Banks had yet to cement himself as a Men’s Physique Olympia champion. Buendia, who holds the most Men’s Physique titles of anyone at four, made it clear that his plan was to return in 2023.

Over the past few years, Buendia hinted that he would return to Olympia to win back his title. A possible comeback in 2020 was on the table, but it never materialized. In Sept. 2022, Buendia announced his return to the sport and revealed he was bulking up to 220 pounds.

Picking up where they left off in their last video, Buendia and Erin Banks laid out their goals for 2023. In addition, Buendia assessed Banks’ latest performance at 2022 Olympia.

In spite of some disagreements, Buendia praised Erin Bank’s physique at 2022 Olympia. Buendia mentioned Hendrickson lost to Banks due to his lower back being a little watery.

“He looked incredible on stage. He won for a reason. It was really close between him and Brandon [Hendrickson]. It was close. Nobody smoked anybody on stage. I think it was really close. I think it came down to… what I heard from some feedback, I heard from judges, I think I talked to you after this show Terrick. They said Brandon looked a little watery in the lower back.

That could have came down to his posing. Like, when he was posing on stage and he was like going through hitting his back poses, he looked sharp, he looked peeled. Both guys, Erin you looked great on stage bro. I’m not taking anything away from you. You looked sharp on stage,” Jeremy Buendia said.

After discussing Banks’ first place finish, Jeremy asked him why he was blocked on Instagram.

“I don’t need negativity around my circle.”

According to Buendia, a champion and ambassador of bodybuilding should be able to handle criticism from fans on social media.

“You’re going to have a lot of dudes, now that you have the weight of the crown to carry, you gotta understand. Just listen for me for a second bro, I’m not coming at you, I’m just giving you advice. I’ve done this before. As a champion bro, you’re going to have naysayers, and people critiquing you all the time, and talking a lot of shit and saying things. Part of being a champion is being able to handle those things. Are you just going to block everybody. Your industry is going to get small really quick if you keep doing that.”

When discussing a potential return, Buendia had the following to say:

“Yeah [I’m coming back], I have every intention of climbing back and beating [the Olympia] in 2023. If my body allows me to do it, and I stay healthy and I don’t have any injuries that occur, I’m putting full force in coming back for my title in 2023,” Buendia said.

“No I’m well aware of that [how hard it is to return to the Olympia stage]. It’s been five years, the division has evolved, the guys have gotten bigger. But you guys have to understand, I won my first title at 23. My last show was what 27 years old, so I finished young and I’m only 32.”

The former four-time Men’s Physique Olympia is confident in his future after making improvements throughout the 2022 off-season.

“You’re 34, so you’re still two years older than me. My body is still reaching its potential and I’m going to come back as a much better athlete than I was,” says Buendia. “There’s going to be a lot of work to get back to a place where I’m competitive with Erin and those guys. But the improvements I’ve made this past year definitely has given me confidence.”

As for Banks, his current goal is to defend his Arnold Classic title next March.

“I’m going to keep doing what I do,” says Erin Banks. “The main thing is I’m focusing on one goal at a time. We got this Arnold coming up in March and then eventually, when we get to that point, if his name is on that list, we’ll have to see then, but as of right now, my main focus is just defending my Arnold title and continuing to do what I do.”

“Going into 2022, my goals were just to simply win the Arnold and win the Olympia in the same year and I accomplished that,” says Erin Banks. “I’m just getting ready for this Arnold to defend my Arnold, simple as that. It is what it is. If you like it, you like it, if you don’t, you don’t. EB going to do what EB going to do.”

With Buendia in the mix, many expect next year’s Men’s Physique Olympia will be even more shocking. Olympia President Dan Solomon already confirmed the show is headed back to Orlando, Florida, and will take place in the first week of November approximately 11 months away.

Erin Banks will aim to defend his title at the upcoming 2023 Arnold Classic in March. In the meantime, Jeremy Buendia will continue adding size in hopes of dethroning the newly crowned champion next Nov.

Jay Cutler: 2022 Olympia Should Have Prioritized The Mens’ Open, ‘The Production Was A Mess’