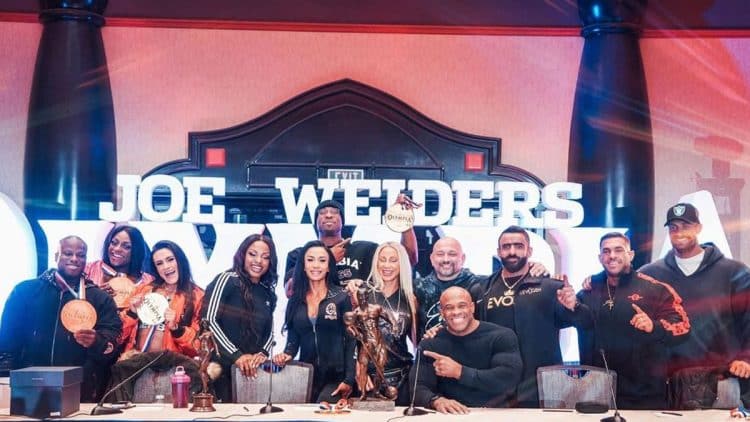 Joe Weider’s 58th annual 2022 Mr. Olympia contest is in the history books, and Hadi Choopan walked away as the new champion with a $400,000 check in his hands. The action commenced for two days and saw 10 other champions crowned, all of which netted some impressive prize money.

Former 2021 Olympia 212 champ Derek Lunsford became one of the biggest talking points around the contest. In Sept. he accepted a special invitation to compete at 2022 Olympia in the Men’s Open division. Instead of competing in the 212 this year and defending his title, he tripled his prize money after finishing runner-up to fellow Evogen athlete Choopan.

Below you can find a list of prize money offered at the 58th Olympia contest, which totaled approximately $1,561,000.

During finals, it was a close three-man race between Nick Walker, Derek Lunsford, and Hadi Choopan. Many regarded Lunsford’s performance as one of the most shocking of the year, but in the end, he couldn’t stop the conditioning and detail of Choopan.

Former 2020 Olympia 212 champ Shaun Clarida looked at his all-time best with jaw-dropping vascularity. He dominated the contest and didn’t leave much room for doubt amongst fans.

While Chris Bumstead dominated for the most part, there were portions of the contest where many thought Brazil’s Ramon Rocha Querioz was pushing him. Nevertheless, the density and detail of ‘CBum’s’ physique was hard to ignore.

This outcome served as one of the bigger surprises of the night. Many fans agreed that former three-time Men’s Physique Olympia Brandon Hendrickson was on his way to a successful title defense, but the detailed back of Erin Banks upset the champion.

Andrea Shaw displayed another showstopping physique and faced a little bit of adversity from Angela Yeo. However, Shaw cemented herself as the clear-cut winner through the finals.

Much like Shaw, Cydney Gillon left no room for error on stage. She brought one of her best looks and coasted to her sixth Figure Olympia title.

After a memorable individual routine that saw her disguised as a shark, Missy Truscott and Jaclyn Baker battled for gold. While it was a closer contest, Truscott secured her second ever Olympia title.

Heading into the finals, many described Sarah Villegas and Natalia Abraham Coelho as frontrunners. To the surprise of many, Coelho got the job done with the more conditioned package.

The Bikini title is known for changing hands, and that’s exactly what happened at 2022 Olympia. Former 2021 champ Jennifer Dorie pushed to secure her title but was unable to stop the momentum of Maureen Blanquisco.

Contender Isabelle Nunes gave Francielle Mattos a run for her money over last weekend. When the smoke cleared, Mattos made history by becoming the first Wellness athlete to win multiple titles in the category.

Harold ‘King Kong’ Kelley picked up where he left off last year. While some of the competitors brought impressive routines, Kelley’s dominance was on display over the weekend. He secured his fifth title at the event.

With a prize pool of approximately $1,561,000 at stake, athletes flocked to the sport’s most prestigious event of the year in fierce competition. There was no holdback, and the level of determination and dedication demonstrated was truly impressive. A highly anticipated event saw a number of competitors give it their all in an effort to win the competition.