Cutler performed deadlifts after a long time in his recent back training session. 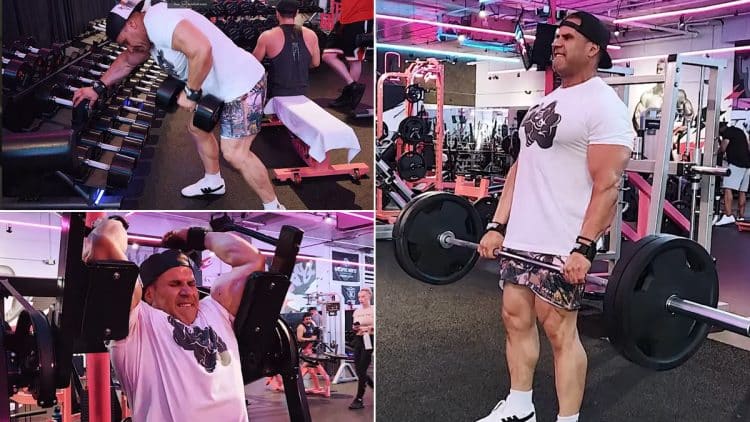 Bodybuilding legend Jay Cutler recently shared a grueling back workout on his YouTube channel. As an experienced bodybuilder, Jay Cutler has a lot of insight into what it takes to succeed. It was, in the heyday of his career, that Cutler gained notoriety as one of the greatest bodybuilders of all time alongside Ronnie Coleman, himself an eight-time Mr. Olympia.

Cutler won the prestigious Mr. Olympia competition by dethroning Ronnie Coleman in 2006. He then went on to win the Mr. Olympia crown three more times in 2007, 2009, and 2010. Cutler’s rivalry with Coleman is arguably the greatest competitive rivalry in the IFBB Pro League history.

Jay Cutler is one of the yesteryear celebrities that has adapted really well to the social media age and has stayed connected with bodybuilding fans long after his retirement. He routinely shares a large variety of content with his half-a-million-plus followers on YouTube. Watch the full video below to see how he crushed his back workout.

Cutler started the back workout with wide-grip pull-downs on the hammer strength machine. He revealed that traditional pull-ups have never been easy for him. As a result, he puts more emphasis on pull-downs to compensate for them.

Jay performed two warm-up sets of this movement to get his blood flowing. He then performed three working sets before moving on to the next exercise.

Cutler next took to pull-overs on the machine—a compound movement that works the back, chest, and abdominal muscles. While speaking about different variations of the pull-over machine, Jay said:

“There’s a lot of variations of this. Everyone talked about the Nautilus pull-over machine that Dorian Yates used. They made a plate-loaded one. But I like Hammer strength or whatever later. But this one is a real leader.

It’s awesome. It gets a good stretch, and I love doing this for back [by] using my elbows to pull,” the four-time Mr. Olympia champ said.

Jay Cutler performed three sets of this exercise. Each set consisted of 10 to 12 reps.

Following the pull-overs, Cutler set to perform seated rows to target the upper back and lats. Cutler used mag-grip handles for the exercise and performed 10 to 12 reps in each set. He did not reveal the exact number of sets.

“I love this movement. I wanted to do it off the floor. But this is the next best thing,” Jay said.

Cutler performed three sets of this exercise and tried to pull off eight reps in each set with a two-and-a-quarter plate load.

The legendary bodybuilder next performed dumbbell rows to work the back further.

“The best back exercise is the one-arm dumbbell row,” Cutler said.

Jay Cutler performed three sets of dumbbell rows. He started with a 70-pound dumbbell for the first set and added 10 pounds in each consecutive set, finishing with 90-pound dumbbells in the third set. Cutler maintained a 10 to 12 rep range for each one of his sets.

Deadlifts served as the finisher for Jay’s back workout. While speaking about his relationship with this exercise, Cutler said:

“Every other week, I deadlift. I’m not always suggested to do deadlifts, but it’s still my favorite exercise. I said I’ll never do it but here I am…”

The Massachusetts native performed two sets of deadlifts to wrap up his back workout. He used two plates on each side and included eight reps in each set.

Jay Cutler has significantly downsized since his days as a competitive bodybuilder. However, looking at the work he has been putting in all these years, it is no surprise that he has successfully maintained phenomenal shape over a decade after his retirement.

You can watch the full workout video here, courtesy of Cutler’s YouTube channel: