Two titans of their own respective industries, The Rock and Hafthor Björnsson appear interested in training together down the road. 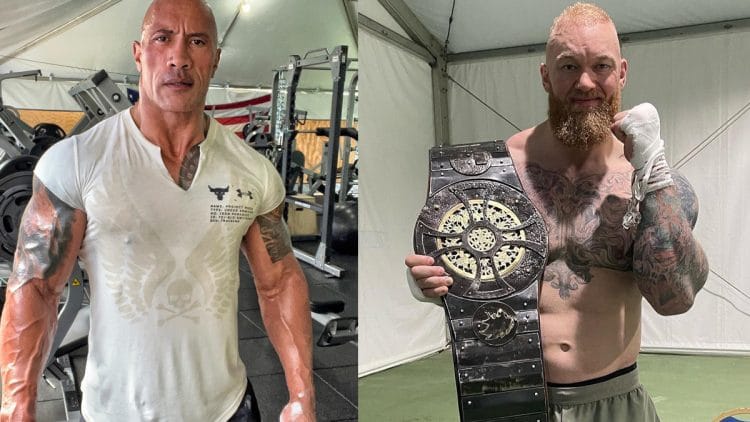 Dwayne “The Rock” Johnson is known for some arduous training routines and appears ready to exercise alongside one of the strongest men in the world, Hafthor Björnsson. In a recent social media post, The Rock hinted at the possibility of meeting up with Björnsson to train together someday.

The Rock (Dwayne Johnson) remains one of the most popular actors on the planet. Garnering fans from his days wrestling in the WWE, he parlayed his charismatic persona into a successful Hollywood career. His enthusiasm for fitness and ability to stay healthy have been important factors to his success. In addition, The Rock’s optimistic personality is another reason why fans flock to him, which has former Strongman star Björnsson interested in training alongside Johnson.

Björnsson recently defeated Hall via unanimous decision when the two met in the boxing ring last month. In the lead-up to the contest, Thor was highly touted as he underwent a dramatic physical transformation to acclimate his body to a new sport. During the fight, Thor utilized effective fundamentals to take control of the action as it progressed. His length and effective jab were contributing factors to his success.

The Rock to Hafthor Björnsson: “One Day We’ll Have To Bang On Some Iron Together”

Decompressing from one of the biggest boxing attractions of the year, Björnsson joked over the weekend about getting up at 4 A.M. to train like The Rock.

Super jet lagged. Woke up at 4am. Doesn’t the @TheRock train at 4am everyday? 🚂 Should I train? #AbsolutelyNot

Super jet lagged. Woke up at 4am. Doesn’t the @TheRock train at 4am everyday?

The Rock is committed to exercising and is often seen training at his home gym dubbed ‘Iron Paradise‘. After Thor hinted at a training collaboration, it appears The Rock is more than willing to pump some iron with Björnsson.

😂
Technically, I wake up @4am every day and I’m training by 5am.
One day we’ll have to bang on some iron together.
The world’s strongest man, boxer, actor etc and the big, brown, bald, tattooed guy who’s only famous for wearing a fanny pack.
Keep kickin’ ass brother 💪🏾 https://t.co/nqXzUXIA1Q

Technically, I wake up @4am every day and I’m training by 5am. One day we’ll have to bang on some iron together. The world’s strongest man, boxer, actor etc and the big, brown, bald, tattooed guy who’s only famous for wearing a fanny pack. Keep kickin’ ass brother

Preferring to enter the gym locked in, The Rock utilizes a strength and power breakfast to accommodate his body on taxing gym days. Consisting of steak, eggs, oatmeal, and five PB&Js, the movie star likes to fuel his body with the right nutrients before attacking his absolutely brutal leg days.

Meanwhile, Björnsson has been unwinding from his boxing contest last month. Following the victory, fans have questioned what might be next for Thor. While Eddie has mentioned he wants the rematch with Thor, the Game of Thrones star is adamant that they need to fight a couple of more times to build up hype for the rematch. Not to mention, Björnsson has been called out by YouTube personalities Logan Paul and KSI despite a clear weight disadvantage being present.

Given their athletic abilities, it would be highly intriguing to see how the pair of celebrities differ in training methods. After being invited to train with The Rock, it’s nice to see both men sharing mutual admiration for each other.