Bodybuilding legend Jay Cutler reflects on his diet and the bulletproof mindset he adopted to capture four Mr. Olympia titles. 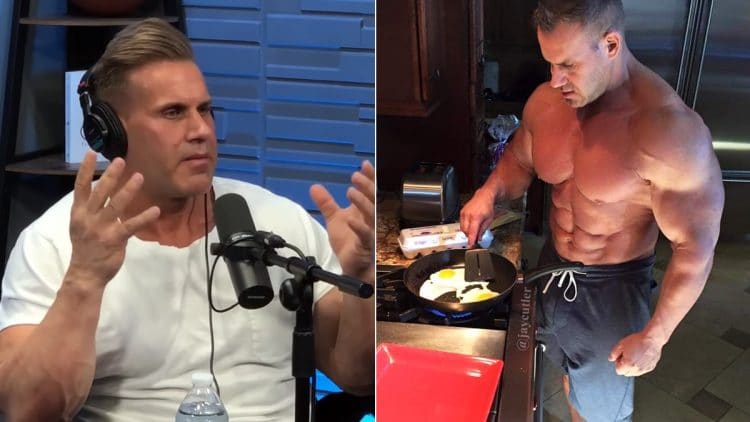 Bodybuilding legend Jay Cutler understands that training and adhering to a strict diet is consequential to success. In a recent interview on YouTube, Cutler discusses the mindset it took to maintain one of the world’s best physiques during his bodybuilding prime.

With four Mr. Olympia titles to his name and three Arnold Classic trophies, Jay is one of the greatest bodybuilders the sport has seen. He took part in an epic rivalry with fellow legend Ronnie Coleman. In 2006, Cutler dethroned eight-time Mr. Olympia Coleman to become champion. Competing with some of the most decorated athletes in bodybuilding, Cutler proved to be a threat anytime he took to a stage.

Along his road as an athlete, Jay utilized high-volume training inspired by Ronnie Coleman. While he admits the training sessions were a ‘little extreme’, he believes it was an important ingredient to his success. Jay maintains that his high protein diet was another essential tool to reaching the top of the sport.

Jay Cutler on Bodybuilding Success: “The Food Is Everything”

In a recent interview on YouTube, Cutler dives into the high-protein diet he utilized throughout his career. In addition, the bodybuilding legend speaks about buying 140lbs of chicken at one time and buying a cow to piece up for meat.

“Yeah, I bought a cow from the butcher. I was living in a place called Spencer, Massachusetts. I had a local butcher there so I’d actually buy all the meat and I would have two freezers. So, what I would do is I would buy the chicken and break it all down into two-pound bags and freeze it.

And then I would have the cow, okay, the cow would be hanging in the butcher place, and I would say, I want these steaks, hamburgers, and I would do the same thing I would put it in like two pounds. Each day I would take out some chicken and some steak.

That’s pretty much all I hate besides eggs. So, when I had the eggs, I went to a local farmstand, and I bought thirty dozen eggs at a time.” Jay shared.

Jay confirms he ate 20 egg whites a day but reveals that some diets he used required more.

As a rising athlete, he read in magazines that cultivating muscle mass was best accomplished by eating and working out.

“The food is everything. Even to this day, I’ve retired now. I haven’t competed for eight years, and I weigh about 230 (lbs) but when this was all going on, I was 270 plus. I mean even at 20 years old I was 270. So, the food I was eating six to seven times a day. I was eating upwards of four pounds of meat a day. You know, it was just every two hours like clockwork.”

Cutler reflects on what motivated him to eat so many eggs per day back when he competing as a bodybuilder.

“Mr. Olympia. Mr. Olympia. You looked at guys like Dorian Yates. Ronnie Coleman was like my hero. Eventually became my rival right. There’s so many greats. You look at all the greats, Lee Haney who was before Yates and I mentioned Chris Dickerson when I first started and of course Schwarzenegger. He won 7. But all you think about is what the books tell you. The magazines told me you have to eat to grow and I think that’s really what drove me. I wanted to be successful and I wanted to build the ultimate physique.

What people don’t realize is that bodybuilders are more like artists right. We use the mirrors just judge how our training is and when we are trying to develop body parts. I always grade my workouts based on how great the pump was. You heard Arnold talk about Pumping Iron and the pump and everything.

Of course, you try to get the most expansion of the muscles that you can but then you realize have to feed it to get those fibers to repair. And of course, get the volume of the muscles.” Jay said.

Jay sought the ultimate physique but doesn’t enjoy food to this day. Nevertheless, he maintains a strict diet of eggs daily and appreciates pasteurized egg whites since the process of preparing the eggs is taken out of the equation.

“Yeah, and the disappointing, I’ll tell you the most disappointing part about what I did for a living. I don’t enjoy food to this day. If you called me and said, ‘Jay there’s this wonderful restaurant opening in Las Vegas’ and we see this all the time. And you say, ‘what do you eat when you go out?’

I don’t want to have steak. I’m not a big steak eater at 44 now. I tend to eat some sushi but I’m limited even on that just because I know a lot of sushi rice has a ton of sugar. I might eat some plain fish or whatever else but there’s nothing else that excites me. There’s no food ‘oh does mom cook her special meal when I go back home’ nothing.

“I still, I drink the egg whites. That’s the difference between back then until now. They didn’t have pasteurized egg whites. Now you can buy the cartons and you can drink them. It’s actually a very good source of protein instead of frying them up. So, I was cracking the eggs, flipping the yolk out, throwing it and having the egg whites. So, it was a lot of work. I’m not going to lie, there was a lot of diets I ate 140 egg whites a day. So I was cracking eggs non-stop.

Jay eats 20 eggs a day but now he is only eating egg whites. Fortunately, Jay is an open book for the bodybuilding community to learn from. In retirement, Jay is known for imparting wisdom to the rising wave of athletes entering the sport. Canadian IFBB Pro Regan Grimes linked up with Jay months ago and practiced posing with the bodybuilding legend.

Cutler believes his mindset is what enabled him to eat enough to build an amazing physique. Jay is confident that his diet consisting of a large amount of protein played a major role in his success.