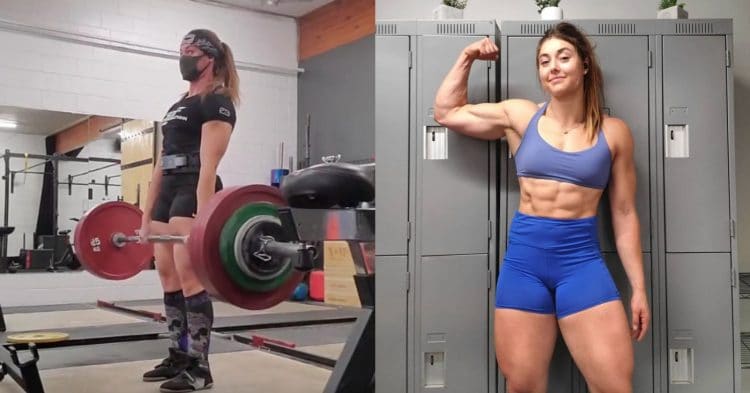 Jessica Buettner is looking to make a come back to the powerlifting platform in the coming weeks. Ahead of the 2021 IPF World Championships, she put up some super impressive numbers in the training room, making fans excited to see her back in competition.

Beuttner has long been considered one of the most promising powerlifters in the world today. Competing largely in the 72kg division, she spends most of her time competing in Canada, where she has won numerous national championships.

Now she is set to return to action, and in the prep for this, she has really kicked her training up a notch. This has lead to some outstanding lifts over the last few weeks, including the 452lb squat and 563lb deadlift she just hit, posting videos of her performance on Instagram.

“DEADLIFT PR – 563lbs / 255kgs !!!!! And 452lbs/205kgs x 2 on squats from midnight 2 days ago (rep PR). I find it hard to get hyped in the gym for deadlifts, squats it’s easy because I feel like I could easily die. But today I had a voice in my head screaming LIGHTWEIGHT BABY 😂😂😂 when it was in fact, not lightweight at all. But I’m HYPED at how this went,” Buettner wrote.

“Thirteen days out from ipf worlds with only a couple of heavy sessions left to go. In feeling this cut now, ate lots of salt and double scooped pre for this one. Woke up at 174.2lbs /79kg bodyweight today so we’re almost there 💪”.

In this pair of lifts, Jessica Buettner achieved a deadlift PR and a squat rep PR at the same time. When you consider the fact that she did this while feeling depleted from her diet, which is even more complicated for someone with Type 1 Diabetes, this is quite impressive.

With just under two weeks to go until this contest, she says that she is in the final stages of her heavy lifting sessions for this prep. Of course, that did not stop her from matching her competition best bench press by pressing 231lb just a few days before her strong squat and deadlift session.

Judging by how intense her training has been, it is evident that Jessica Buettner is preparing to go as hard as she can at the International Powerlifting Federation World Championships. It’s always wonderful to see her in action and it won’t be any different this time.