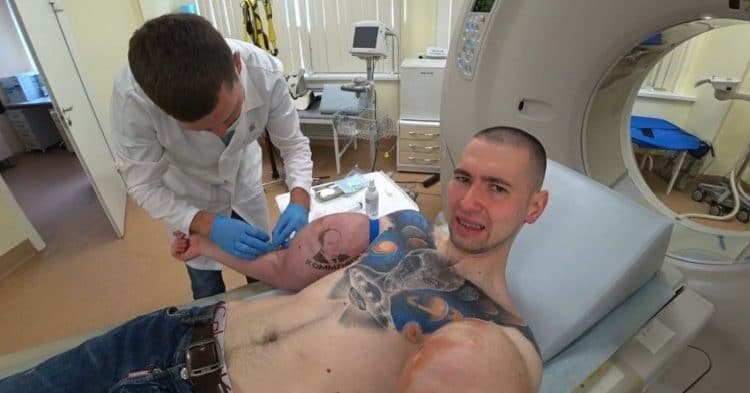 The Synthol Kid himself, Kirill Tereshin has long been the subject of attention for his bizarre and concerning body modifications. Now he is in a situation where he could be left fighting for his life, due to these choices.

Tereshin has long been a prime example of someone with bigorexia, feeling like he needs to be bigger no matter what. Unlike others who work hard for it in the gym however, he opted for insane amounts of synthol, which is essentially petroleum jelly injections, which make his arms looks comically big.

He has had a variety of health issues over the years because of this, even needing two surgeries to drain his arms, and remove his fake triceps. After having the rest of his surgery to finish removing the implants delayed due to the pandemic, his surgeon is now telling him that he is in danger of losing his life if he does not remove the synthol soon.

“The risk of complications in this case is very high, but inaction will not help the patient,” Dr. Dmitry Melnikov, a surgeon, said to Tereshin.

“A toxic substance in the body long term can complicate the kidneys and lead to death.”

There was a time that Kirill Tereshin did not seem to regret his decision to get the insane amounts of synthol injections, even leaning into his bizarre appearance by trying his hand at things like MMA and slap fighting. However it is now clear that he has second thoughts about his life choices.

He explained that when he first got the injections he was a young man who did not do much research on what he was doing, or its side effects. Now, four years later he realizes he made a few mistakes along the way and wants to do better.

“Soon I will have a very complicated, hard third surgery. I don’t know how it’ll end up. I bulked up my arms when I was 20 due to my own stupidity. I did not think about the consequences. I am very lucky that there are doctors who took me on. God forbid something happens to this nerve and I cannot move my arm,” said Tereshin.

“I really worry about this. I am very afraid….I should have thought about this earlier, I know. I blame myself, I know I’m guilty… I’m only 24, and my immune system is so far coping with this inflammation, but I really do not know what will happen next. That is why I started the surgeries to get rid of this nightmare.”

It seems that Kirill Tereshin has learned his lesson, and is looking to make better choices moving forward. Hopefully it is not too late, and this surgery will give him a second chance at doing the right things.