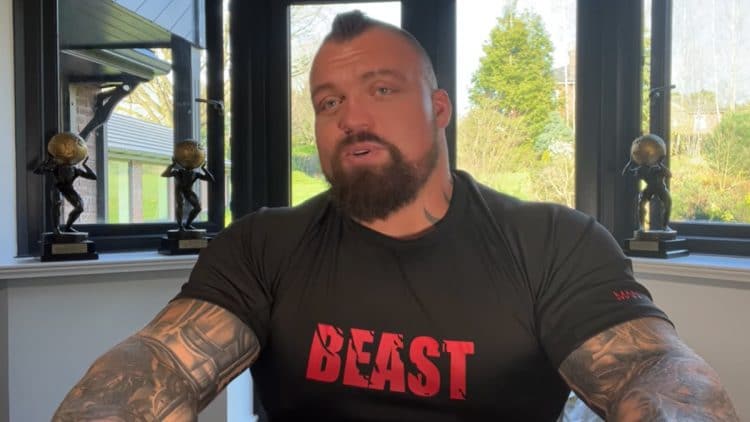 Former Strongman stars Eddie Hall and Hafthor Björnsson settled their differences in the boxing ring a few weeks ago. Following a unanimous decision loss, Hall has addressed the defeat, congratulated Thor, and clarified some outstanding bets that have yet to be resolved.

Facing his archrival Hafthor, tension surrounded their boxing match due to an ongoing feud that began at the 2017 World’s Strongest Man competition. Eddie Hall narrowly defeated the Icelandic giant to claim the title of  WSM but Thor suggested that he was cheated out of the win. Hostility continued to grow after Thor broke Eddie Hall’s world record deadlift in 2020 after pulling 501kg, outperforming Hall’s previous record by just two pounds.

In the end, Björnsson got the last laugh as he walked away victorious in their six-round boxing affair. Reflecting on his debut loss in boxing, Eddie admits that emotions got the best of him during the contest. Considering the high stakes behind the fight, Eddie has acknowledged his defeat with grace. In the immediate aftermath, many fans have wondered if and when Eddie plans to honor his pre-fight bets regarding a tattoo, Larry Wheels, and money for charity.

Publishing a video on his YouTube channel, Eddie takes the opportunity to thank Thor and accepts that he was outboxed after being too emotionally invested.

“It’s time for me to eat a little bit of humble pie and address a few things. So here it goes. Firstly, I want to say a fat massive well done to Thor. I want to say well done for the fight. I want take this opportunity to say what a great Strongman you are, or were. I appreciate you as a man and the things you done and who you are because at the end of the day, you’re a phenomenon. You’re a giant of the world amongst us. Someone who is special. Someone, who a bit like myself, wants to leave an impression on this planet and do positive things and inspire his own generation and a younger generation and his own offspring. In that way, we are not too dissimilar. So you got to respect that.

Thor, well done on the boxing match. You definitely employed better tactics than me. I suppose my downfall was I saw it as a fight and I wanted a fight. In the leadup, in the press conferences, I just wanted to fight. I didn’t care how, where or when. I just wanted to punch you in the face. I was so emotionally involved, that I think that was my downfall. So I shake your hand virtually. Well done sir. You composed yourself much better in the ring and it paid off. Fair play, you outboxed me. I want to take this opportunity to thank my coach and my team and take this moment to apologize to my coach for letting my emotions get the better of me.” Eddie Hall shared.

After losing the high-profile boxing match, Eddie revealed that online trolls were out in full force. Nevertheless, Eddie is thankful for his family and believes this experience in the ring has brought him closer to them.

“Spent a few days with my family after the chaos and I needed that quiet time to recover my thoughts and get away from the online circus as well. Wow. You guys came in hard with the trolling. You know what, I deserved it. Some of the comments have been quite funny. I haven’t read too much but the stuff I’m seeing, you go in hard and fair play, you know, fair play. It is what it is. But again, it’s just made me realize how important family is. None of the comments, none of the media, nothing else matters. The only thing that matters to me is my wife and kids. This has definitely brought me closer to them.”

In the lead-up to the contest, many bets were presented. Eddie and Thor discussed a hefty cash wager to a charity chosen by the winner. In addition, the loser of the fight was supposed to get the winner’s name inked on their body.

After Larry Wheels vocalized support for Hafthor before the fight, he got into a confrontation with Hall about a violent graphic showing Eddie’s severed head held by Thor in a social media post. Eddie spoke with Wheels and agreed to bet $10,000 on who would win. Eddie has now addressed the bet and signaled that once the money is in his account, he will begin dispersing it to Wheels and the charity of Thor’s choice.

“The tattoo is, I mean we never got anything formally in writing. We did try to. I reached out to the promoter a couple of times trying to get a Zoom call with Thor just to talk about it. Unfortunately, it never came to that. So, there’s no stipulation on how big, where or what color, anything, other than what was said on YouTube. So, it’s going to be used as a tool for the rematch, which is fine. I would do the same. I wouldn’t do the rematch unless Thor got the tattoo. It’s going to happen.”

RELATED: Eddie Hall Recovering From Chest Infection And A Possible Concussion Ahead Of Hafthor Bjornsson Fight

Despite bad blood consuming both men before the fight, Eddie has accepted the loss with dignity in a humble manner. After addressing the charity money and the wager with Larry Wheels, time will tell if Eddie honors the tattoo bet by inking ‘Hafthor Júlíus Björnsson World’s Strongest Man’ on his body.