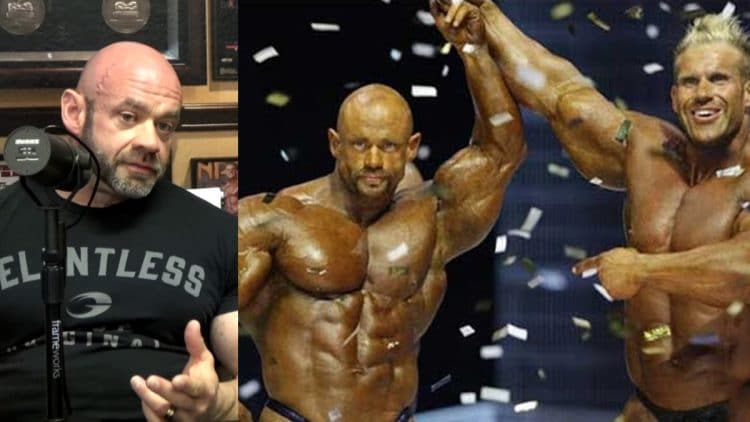 Bodybuilding legend Branch Warren was a perennial contender in the IFBB Pro League and pushed four-time Mr. Olympia Jay Cutler during their time competing against each other. In a recent episode of Cutler Cast, the bodybuilding legends reflect on Warren’s time in the sport and the injuries he sustained while competing.

Jay Cutler has amassed a career filled with some amazing accomplishments. In addition to winning Mr. Olympia a total of four times, Jay took part in one of the most epic bodybuilding rivalries the sport has seen with Ronnie Coleman. In 2006, Jay did the unthinkable and managed to dethrone Coleman after an eight-year run as Mr. Olympia.

Meanwhile, Branch Warren was another standout in the IFBB Pro League during his time in competition. Some of his most notable bodybuilding victories came when he took first prize at the Arnold Classic in 2011 and 2012.

Though, back in 2009, Branch remembers coming so close to a Sandow trophy that he could almost taste it. Unfortunately, Warren was runner-up to Jay Cutler but defeated 2008 Mr. Olympia Dexter Jackson who came in third.

Branch Warren Reflects on Beating 2008 Mr. Olympia But Not Winning the 2009 Show

In a recent interview with Jay Cutler, Branch discussed coming razor-close to winning a Mr. Olympia title in 2009. For Warren, placing in second stings more since he came so close to realizing his first Olympia title.

“Then I was like, I just beat Mr. Olympia and I still haven’t won the show yet. How does this happen. I had no idea. You know, they called me, they called your name one, and I got second. It’s the worst though. Getting second place at Olympia is the worse. People saying, ‘oh that’s awesome’ and saying, ‘no that sucks. The second place in Mr. Olympia is the worst place in all of bodybuilding because you’re one small step from the grand prize but you didn’t make it. I would of rather got third.” Branch Warren shared.

“I remember they called Dexter in third place, and I’m like ‘oh shit I’m about to become Mr. Olympia. Then, I’m like I beat Mr. Olympia and I still haven’t won the show yet how does that happen.” Warren said.

“I remember I was super proud. You know I took your hand and I said, you know I always wanted to show respect. Like I knew I won. I wasn’t really concerned with anyone. I knew I had improved that much that I knew it was enough for the judges. I wasn’t even sure how great you looked. I remember Kerry coming back and saying ‘man, Branch looks really good you know’ but it wasn’t like you never know, you’re just like, that was my best right in years. Winning that.” Cutler said.

While Branch doesn’t believe he was screwed out of the title, he underlined the importance of size in bodybuilding. Branch maintains that when conditioning is close but one athlete is bigger than the other, the bigger guy is usually the one who wins.

“That’s why I told Hani that last week reading. I said, you know that’s my opinion, that’s his best though he pulled it all together especially after coming back from defeat. You know, the Mr. Olympia is about being big. Like I told people when they say, ‘oh you got screwed’, I say, ‘man I didn’t get screwed.

People say that because, first of all I was 242, and you were almost 260 at the show. Bigger is better in bodybuilding. You get two guys that are equal in conditioning, or close in conditioning, the bigger guy usually wins. That’s just the way it is.” Warren shared.

Despite coming in second, Warren was confident he could still win Olympia.

“Yeah, I got second place, so of course, you’re within striking distance. If there’s any doubt, I think I erased it at that point. I was like ‘okay I can actually do this potentially and win one of these’. You know, there’s how many guys that won that show, 16 in 65 years or something like that.” Warren said.

Warren Reveals Injuries That Led to Him Not Competing at 2008 Mr. Olympia

Warren reveals that he sustained two triceps tears and a torn quad in 2008 which kept him from the show.

“Both triceps and the quad” Warren said.

“I remember being at expos when you were in a slang. I want to get into the quad tear because you just defied any odds of anything.” Jay responded.

Following the injuries, Branch was counted out, but still managed to keep the competitive flame burning strong and proved as much at the O in 2009.

“The best revenge is success right. Our generation, I don’t think anyone got counted out more. Usually, something would happen, and everyone would write my obituary that I was done. The best way to get them back is to don’t say anything and win. That’s what I tried to do. I stayed focused. I never really took it in and enjoyed it like I should have maybe because I was so focused on training.

Winning a show. No matter what it was. I’d go out and celebrate little bit that night, and next day, I don’t even want to think about it because I’m so focused on the next one. I never really took time to take it in and enjoy it so you know I think it goes back to my mentality as a kid.

If I was afraid, if I ever took back and enjoyed it too much I would lose that thing inside us that drove us. So, I protected it so fiercely. That I wouldn’t celebrate that much or enjoy it.” Warren said.

Branch remembers a hunting trip in 2008 that led to him being unable to compete at Olympia that same year. According to Warren, this was the second triceps tear he sustained throughout his bodybuilding tenure.

“The first time I got injured was tricep in ’08. Excuse me, maybe ’06, ’04, oh ’03 yeah. It was the second one. I partially tore it. Then I actually did the the GNC Short Strength as my second competition. I placed up in the money and I got a first paycheck at my second show. I had it repaired. That’s right back from the Dallas Europa Charlotte Pro, eighth at the Olympia, second at the Arnold.

Then, ’08 I was getting ready for the Olympia, thirty days out. I actually went hog hunting. Her nephew was in town, and I promised to take him out and do the whole dog thing. She’s like ‘don’t go, don’t go, what if you get hurt’. I said, ‘I’m not going to get hurt I do this all the time’.

Thirty days out and I normally didn’t do stuff like that close to the Olympia, just stay home and stay focused. We were going through the woods, and we were trying to get to the hogs, and anyway I slip and trip over these briars fall wrong and on this logs, and my tricep pops off. I’m mad as hell, then my nephew wanted to be a little bitch and pussing out and wouldn’t kill the hog. So, I got him by the back of the neck, you better take this hog out or I’m gonna kill you. So that knocked me out of the ’08 Olympia.”

Despite never winning a Mr. Olympia title, Branch Warren was recognized for his ability to maintain his physique year-round. After earning second place to Jay Cutler and defeating Dexter Jackson in 2009, Branch is one of few bodybuilders who defeated the reigning Mr. Olympia without winning the title.