In preparation for 2022 Olympia, Bumstead is utilizing any resource at his disposal: "Hopefully that balance will help me mitigate stress for Olympia and have a really healthy prep." 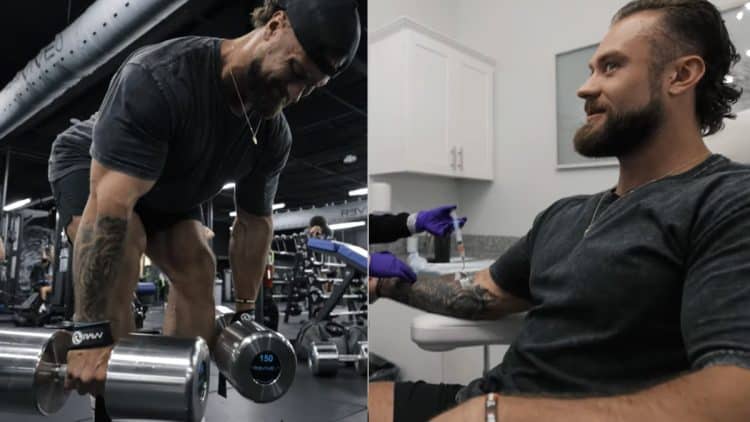 Classic Physique juggernaut Chis Bumstead is determined to pick up where he left off at last year’s Olympia contest. In a recent video, Bumstead got stem cell injections for regenerative benefits and shared a strenuous hamstring workout.

Bodybuilder Chris Bumstead is highly touted for a number of reasons. He is a three-time Classic Physique Olympia champion, a title he’s carried on his back since dethroning his predecessor Breon Ansley in 2019. Lauded for his intense preparations, the 27-year-old attacks his off-season in a very calculated manner. Last year, Bumstead got sick with COVID-19 and lost a considerable amount of weight as a result.

The setback prompted the decorated IFBB Pro to adhere to a strict bulking diet over the past few months to stack on more weight. Bumstead revealed a whopping 5,000-calorie diet he’s stuck to daily since the virus ran its course. In order to remain a top bodybuilder in the world, athletes must abide by strict practices involving dietary choices, supplementation, and steroid cycles.

Last month, Bumstead spoke about his most recent cycle as he turned up the heat for 2022 Olympia preparations. The Canadian native made headlines after saying he’s ‘decreased everything’ in terms of gear while managing to look even better. He clarified that he’s currently taking around 200 milligrams of testosterone a week, reducing what was once a ‘normal bodybuilding cycle’ to now only two compounds.

Preserving his health is a top priority and Bumstead believes procedures like stem cell therapy can help him gain an edge by virtue of the regenerative benefits they offer to bones, cartilage, and ligament tears.

In a recent video, the three-time Classic Physique Olympia winner gave his thoughts on some of the health benefits stemming from mesenchymal stem cell therapy.

“I’m going to be doing stem cell in a different way than before. I’ve done stem cell in my shoulder because it has a lot of regenerative benefits. It can help heal, bones, cartilage, ligament tears, anything like that. So, I’ve injected into my shoulder before, but doing something new today.” Chris Bumstead said.

“C-Bum” clarified that these mesenchymal stem cells come from the umbilical cord of a newborn baby. Before harvesting the cells, medical professionals ensure that the mother and newborn are in good health.

“There’s been a lot of studies that show this helps a lot with autoimmune diseases. It helps modulate your immune system so that it doesn’t shut down your immune system. So, you can’t actually tackle off stuff you need to like infections and all that kind of stuff, but it stops your autoimmune disease from impacting itself negatively, which mine does on to my kidneys.

In order to help combat that, I’m using something called mesenchymal stem cells, which comes from the umbilical cord of a recently birthed baby. They test them, make sure the mom and the baby are healthy before taking them.”

While Bumstead admitted he’s had stem cell injections before in his shoulders, he’s never tried this specific treatment.

“We’re going to be going to do that right now. It’s a large amount. First time that we’re doing this but I’m excited. Hopefully it helps my immune, keeps me healthy for prep, and heals whatever I need to in my body.”

Bumstead suffers from an autoimmune disorder called IGA Nephropathy. IGA nephropathy also known as Berger’s disease is a kidney disease that occurs when an antibody called immunoglobulin gets lodged in the kidneys. Bumstead believes stem cell therapy might help with his ailment and with his ability to fight infections.

“My immune system is overacting in a way that it’s attacking healthy cells in my body instead of an infection. It’s supposed to prevent that while allowing me to continue fighting infections. Hopefully that balance will help me mitigate stress for Olympia. Have a really healthy prep. Obviously, this is pricey, but your health is fuc**ng everything.”

Find a full list of the exercises used in this video below:

After warming up his hamstrings, Chris Bumstead opted to practice some glute ham raises, which he says feel really nice because of how the spine decompresses during the movement.

“I’m going to do two sets of this to failure. Can’t really dropset since it’s bodyweight. Then, we’re going to do a heavy Romanian.” Bumstead shared. “It gives you a really nice decompression of the spine at the bottom. Then, you pull from your hands as hard as you can, get as high as you can, and get a really tight squeeze. It’s different from anything else you can do with weights.”

Bumstead proceeded with dumbbell Romanian deadlifts next, an exercise he favors because it doesn’t hurt his back.

“I love doing these dumbbells because it allows me to put my arms and bend my legs in the perfect position so I’m not hurting my back or anything. I’m going to workout and do two heavy sets.”

The Olympia champion offered a few tips during this exercise like pushing his glutes behind him as much as possible to work his ‘full lumbar chain.’

While Chris planned on using the leg curl machine, he took a moment to fire off some pull ups instead since the machine was occupied.

“On hamstrings I usually do a little bit of back. Since these kids are taking their time on the ham curl machine. I’m bumping in some pull ups while waiting on the machine. We’ll finish with some hamstrings, a little calves and some pull overs and call it a day.”

“Two working sets and a drop set on the second one, and that’s it for hamstrings.”

Bumstead decided to activate his lats next with a cable exercise.

Before calling it a day, Chris Bumstead goes for machine seated calf raises even though he would usually practice high single leg press movements instead.

“Normally I would do a really high single leg leg press to target my glutes but my last quad day my glutes were sore as fu** after. So, I flipped that out with a little more volume on the concentrated hamstring machines.”

In addition to this training session, Bumstead recently got busy with a demanding arm day workout. One of the most important aspects of Bumstead’s training camps is ensuring that he rectifies what he sees as ‘weak points’ on his body.

The reigning Classic Physique Olympia champion is approaching his prep comprehensively, in hopes of securing his fourth Sandow trophy this winter. With the help of stem cell injections, Chris Bumstead is determined to push his body through prep like never before.