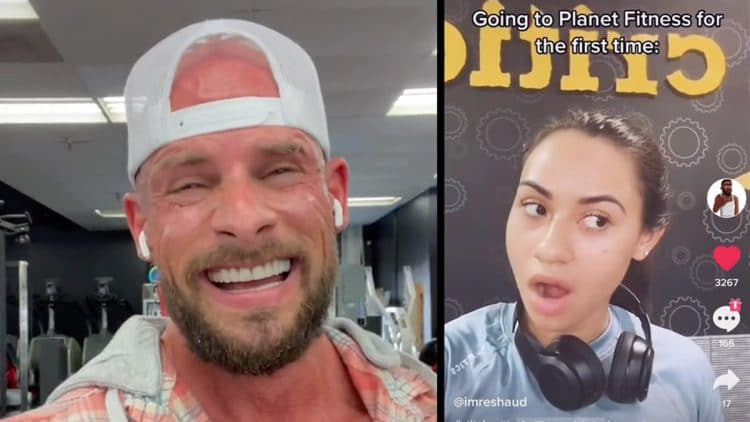 Fitness influencer Joey Swoll continues to use his social media presence to fight against toxic gym culture. In his latest TikTok video, Swoll made an example out of a female TikToker for shaming gym-goers.

Joey Swoll is a popular influencer and has steadily emerged as a TikTok sensation for his noble fight against bad gym etiquette. Swoll is often making headlines with viral videos aimed at correcting poor behavior in the fitness world. Last week, Joey reacted to a female TikToker who thought she was being stared at by an older man. Swoll highlighted the difference between ‘staring like a creep and simply looking at somebody to see what they’re doing’ in his last video.

In a since deleted video, another female TikToker went after a gym-goer who she thought was ego-lifting and performing ‘half-ass reps’. Little did she know, the exercise the man was practicing was called a partial. Once the viral snafu reached Joey, he took that opportunity to explain how partials are great for the delts and building size.

It appears Joey’s efforts are gathering momentum as a man by the name of Reshaud joined him in condemning a female TikToker for making fun of her local gym-goers.

In a recent video made on TikTok, Swoll thanks Reshaud, and explains the reasons why the young woman shouldn’t have posted the video.

The video reads, “Going to Planet Fitness for the first time” and queues the female TikToker mouthing, “Where are all the hot people?”.

“Sweetheart, I don’t know if you know but there’s this guy that goes by the name of Joey Swoll. You still got time to delete it. Reshaud said. Take this shit down, now!”

“Rashad, this is amazing, thank you brother. Guys, this shows you the movement to change toxic gym culture is spreading. It’s growing and you’re seeing the change on social media on TikTok. This is awesome. Thank you all.” Joey Swoll said.

The #MYOB movement is growing! Culture is changing! Thank you @Reshaud

According to Swoll, the video is hurtful to people who suffer from gym anxiety. In addition, he believes people should be more respectful of others at gyms because it’s a shared space.

“This young woman that posted the video, you need to understand what this does to people with gym anxiety. People who are scared to step foot in a gym and start their journey. This is so hurtful to them. You shouldn’t have posted this. You need to do better. And to those out there that say ‘Joey, why don’t you message them before posting before’. Why does it have to come from me? I’m not special.

What’s more important about me than there is Reshaud or anybody commenting on that video. That should be enough to know that video shouldn’t be up. You need to do better. Swoll said. Mind your own business.”

Joey has consistently brought attention to the issue on social media and doesn’t look to be slowing down. Judging by his recent TikTok video, Joey’s movement against toxic gym culture is spreading rapidly.