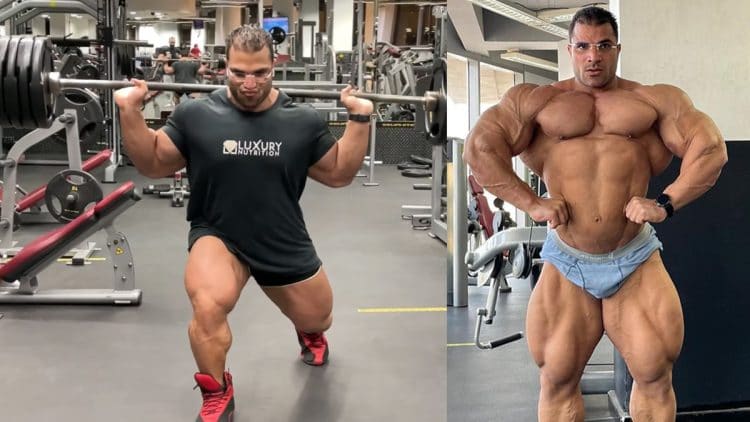 Hassan Mostafa made his IFBB Pro debut with the 2019 IFBB Indy Pro and finished third in the Open Pro division. He has since competed in a total of 11 Pro shows and achieved a podium finish in four of those. Mostafa’s sole Olympia appearance came in 2021 Olympia where he finished 13th. He last competed at the 2021 Texas Pro and missed a podium finish with mere two spots, finishing fifth overall.

Mostafa recently shared a killer quad day workout on his YouTube channel. The workout consisted of many supersets to get the most out of each movement.

Supersets are a time-efficient way of performing different movements in a session. The shorter rest periods also increase the aerobic intensity of a workout.

Hassan Mostafa warmed up sufficiently before starting with the working sets to avoid injuries. The first superset consisted of three sets of leg extensions and leg press with 15 to 25 reps until failure.

Hassan Mostafa then moved on to the next superset that again consisted of three sets of hack squats and Smith machine lunges with 15 to 25 reps until failure.

Benefits of hack squats and regular squats are similar. However, the hack squats are generally safer for most people to perform due to the design of the machine. Since the weight is distributed through the center of mass at an angle, the stress on spine and lower back is significantly reduced than the regular squats.

After the first two supersets, Hassan Mostafa next performed an extremely demanding workout. It consisted of three sets of walking barbell lunges with progressive overload for 15 to 25 reps until failure.

In addition to the quads, when performed with proper form, barbell lunges are an effective way to work the hamstrings, hip flexors, and glutes as well.

Hassan Mostafa wrapped up the quad workout with three sets of single-leg extensions with 15 to 25 reps until failure. This movement served as the finisher of the day.