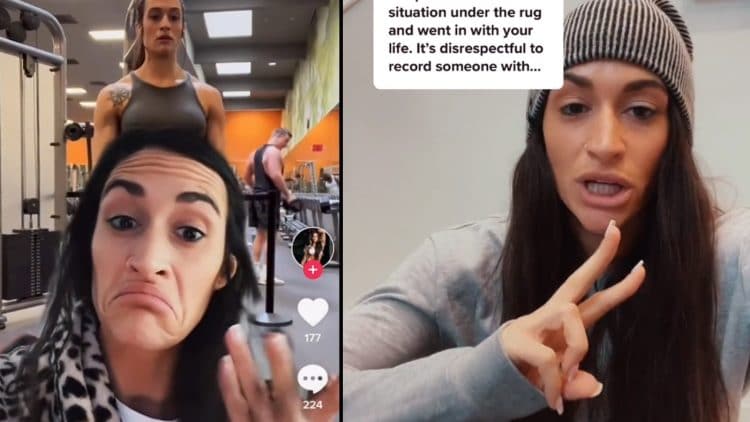 Last week, Tiktoker Nikki Fitness had a video go viral where she shamed a man at the gym (who didn’t know he was being recorded) for practicing drag curls. With a frenzy of backlash ensuing after the release of the video, TikToker Nikki Fitness is publicly apologizing for shaming the innocent gym-goer.

As of late, recording inside gyms has become a topic of contention. While some agree it’s an invasion of privacy, others might advocate for it because it can result in keeping people safe who are entering the gym alone. Just a few months ago, a TikToker alleges that a man followed her home from LA Fitness after stalking her in the gym. Ultimately the confrontation was resolved after law enforcement got involved.

The Nikki Fitness TikTok video caught fire last week when she asked her friend a couple of questions after scoffing at a man trying to do drag curls. While recording the encounter, the TikToker asked her friend, “What do you think he’s doing? What do you think he’s working? I don’t know either.” Considering Nikki Fitness is an avid practitioner of exercises, some were taken aback by the fact that she was dumbfounded by the exercise.

With a focus on bicep development, bodybuilding legend and coach Charles Glass is a proponent of the drag curl technique. In essence, stress is taken off the deltoid during the bicep drag curl exercise. According to Glass and Joey Swoll, taking tension off of the deltoid enables the bicep to get bigger and achieve a better pump.

In response to the TikToker’s lack of lifting knowledge, fitness social media star Joey Swoll responded. Joey Swoll put out an informative video explaining the purpose of the workout that led to a man being shamed at the gym unnecessarily. With Swoll’s reaction video being viewed over 12.6 million times, it’s safe to say a large faction of the fitness community agrees with the life-long fitness enthusiast/bodybuilder.

After the TikToker’s video went viral for all the wrong reasons, the fitness enthusiast took to the streaming platform and issued an apology with promises of doing better in the future.

“Alright with this question, I wanted to visit it in two parts. First and foremost, I want to apologize if this video hurt anyone. So the first part of the question, I can see how it looks like I swept it under the rug. However, I have been living with this every single day. There is no hiding from this situation.

Obviously, this video has gone viral and I’m just trying to do the best that I can. So part of trying to be better is going back to produce content to show you guys I’ve learned from this. Now for the second part of the question. I didn’t intentionally film the person behind me, but I understand that I shouldn’t have reposted it and commented it.” TikToker Nikki Fitness shared.

In another video Nikki Montesanti stated ‘as a health coach and a mental health advocate,’ she understands the content was irrelevant and thanked her viewers for the constructive criticism:

“I’m here to apologies, I’m here to take accountability and I’m here to let you know that I promise, from here on out, in the future, I will do nothing but serve you in the way that you need to be served.”

For those out there trying to better themselves 💚 #fyp #healthcoach

Despite causing a stir online, it appears Nikki Fitness is genuinely apologetic. Some people have taken to the comment section to condemn recording anyone without consent at gyms. Either way, at least the notable fitness TikToker went to the effort to address the issue and apologize for not knowing what a drag curl was.