Fitness influencer Joey Swoll condemns a TikToker for harassing a gym worker after they closed for the day. 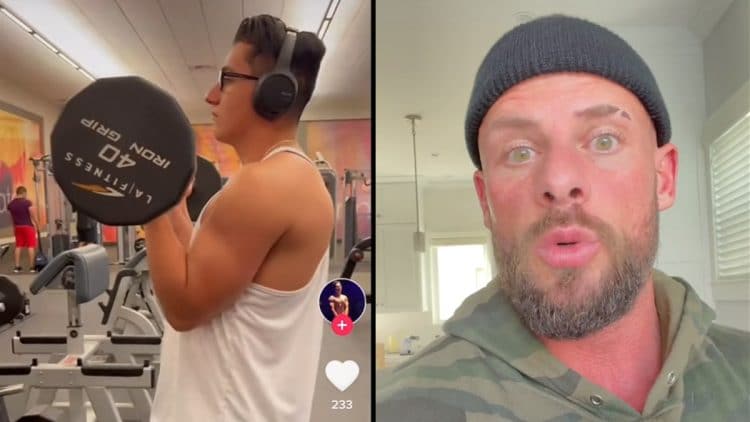 Hostile gym interactions and toxic encounters have become all too normal on streaming platforms like TikTok, but fitness influencer Joey Swoll is determined to fix that. In a recent video, Swoll reacts to a disrespectful TikToker and voices the importance of treating everyone in the gym with respect, including the staff.

Joey Swoll has utilized TikTok as a tool to fight against toxic gym culture. Viral videos are always circulating and often for the wrong reasons. A recent example included a female at the gym who felt uncomfortable because an older man was staring at her. While these situations happen often, Joey made it clear that the older man meant no disrespect, highlighting the difference between, ‘staring like a creep and simply looking at somebody to see what they’re doing’.

Another instance that attracted online attention involved fitness influencer Kylen Suttner, who went after a ‘Karen’ in a TikTok video because the gym-goer stole the weights from under her bench. Suttner said the woman told her she had the weights ‘long enough.’ These interactions have become all too common which has triggered Swoll’s desire to correct poor gym etiquette and toxic gym culture.

Joey Swoll to Rude Gym-Goer: “You Owe This Woman an Apology”

In a recent video, Swoll condemns the TikToker for his actions and stresses treating everyone, including gym workers with respect while working out at the gym.

“Treat EVERYONE in the gym with respect including those who work there.” Joey Swoll posted.

Treat EVERYONE in the gym with respect including those who work there. #MYOB

Joey explains that the gym worker is simply doing their job. However, instead, the TikToker decided to post about it in an effort to make fun of her.

“So, because this woman wants you to leave when the gym is closed, like she’s supposed to, doing her job. You decide to call her a “Karen” really? Not to mention she says it’s 5 o’clock and they’re closing, and it’s most likely the weekend or a holiday and she most likely just wants to go home and enjoy herself and spend time with her family. You should have been respectful and just left, but instead you decide to post this to make fun of her. You owe this woman an apology or the gym should revoke your membership.

“You guys hear me all the time talking about respecting others in the gym. That goes for the people that work there too. I don’t care if it’s the owner, a trainer or one of the janitors who are mistreated all the time. If you can’t respect others, stay home. You don’t belong there. Mind your own business.” Joey Swoll said.

Swoll’s mission to correct toxic gym culture has been growing as he continues to push the message that gyms are public places and shared spaces for everyone.

Chaos can erupt quickly at gyms, and that was the case earlier this week when TikToker Lexi Moore was accosted by a man who threw a weighted ball in her direction while she was trying to exercise. Fortunately, the gym workers helped her through the situation and informed Lexi that the man was banned from the gym permanently. The culprit was detained following the incident.

Joey is sending a positive message to the fitness community and doesn’t plan on slowing down in his fight against toxic gym culture. Instead of harassing gym workers, Joey believes the man should have simply left the gym.