Say 'Karen' without saying 'Karen'... Swoll condemns a TikToker for being rude to a gym-goer, 'you berated him, you swore at him and told him how to act' 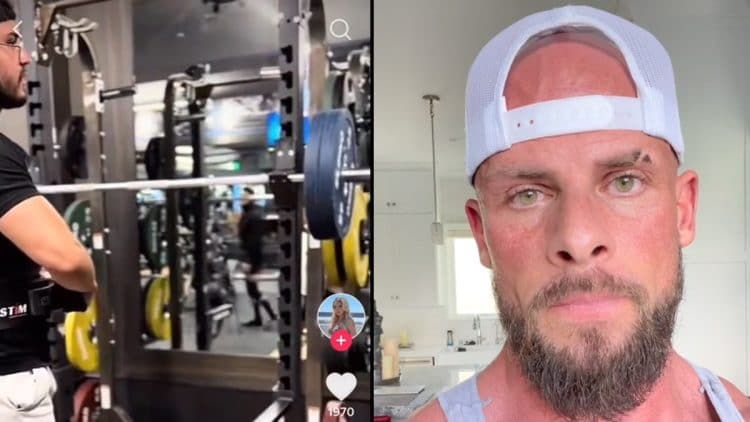 Fitness influencer Joey Swoll is on a mission to make gyms a more welcoming place for everyone. In a recent video, Swoll addresses a female TikToker who berated a gym-goer after he left the Squat Rack he was using for a few minutes.

The interaction featured on Swoll’s TikTok shows a man and a woman upset at the gym after finding someone’s belongings next to a machine they wanted to use. As the lifter returns to his belongings and the machine, a female TikToker gets aggressive with him, and is heard on video saying, ‘it’s baffling that some people can just leave their stuff here.’ During the clip, the gym-goer returns after possibly supersetting with a different workout.  He apologizes to the frustrated woman before offering them both a chance to use the machine when he’s not.

After the gym-goer was asked how many sets he had left, he clarified about four or five. The TikToker, who can be heard off camera, insists that she and her friend only have one hour to work out and that they’ve been waiting on the machine for over 15 minutes. Even though the man using the machine apologized and said they could share it, she continued to press him, stating, ‘just don’t leave your shit here’.

Joey Swoll Responds to Female TikToker: “He Didn’t Deserve the Way You Spoke to Him”

In a recent video, Swoll responded to the hostile gym interaction.

“Right off the bat, first and foremost, it is ALWAYS good gym etiquette to be kind and courteous of others. Be wary of those around you. Don’t take forever on a machine. Let people work in, whatever the case may be, don’t step away for long periods of time like this man did. However, that doesn’t mean that he has to come back from supersetting or whatever he was doing to somebody with a camera in his face recording him and then threatening him that you’re going to post it online.

He immediately apologized to you and asked if you wanted to work in. He stayed calm the whole time. He didn’t deserve the way you spoke to him, you berated him, you swore at him and told him how to act.” Joey Swoll shared in a TikTok.

While the female TikToker had a right to speak up, Swoll believes these types of situations can be resolved with a conversation, not by cursing and insulting.

“Then in the comments you even said that you went and spoke to management about getting his membership revoked. Really, you think he deserves that? Guys, the gym is a shared space. Swoll continues. You’re going to be around people that you sometimes don’t agree with and not everyone is going to follow gym etiquette to a T. We’re human beings. We make mistakes and that’s okay.

Situations like this can always be resolved if you stay calm, you’re kind, respectful, and simply have a conversation. I bet if you would have approached him and said ‘hey is this your stuff?’ Or ‘may we work in?’ He would of absolutely been kind to you and let you have it. You need to do better than that. Mind your own business.”

These wacky gym encounters have become increasingly common, so much so that some of these ‘fitness influencers’ have started problems with gym workers. Last week, a female TikToker wrongly accused a gym worker of gawking at her from afar. It turned out that he was an overnight gym associate, and after things escalated, her membership was revoked, and she was charged by police for trespassing.

Situations like this can be avoided by being kind and respectful, NOT confrontational.

While Swoll’s movement to change toxic gym culture is on the rise, he apparently still has a lot of work to do. After addressing the aggressive female TikToker, Swoll is confident that this issue could have been resolved with kindness, respect, and an honest conversation.