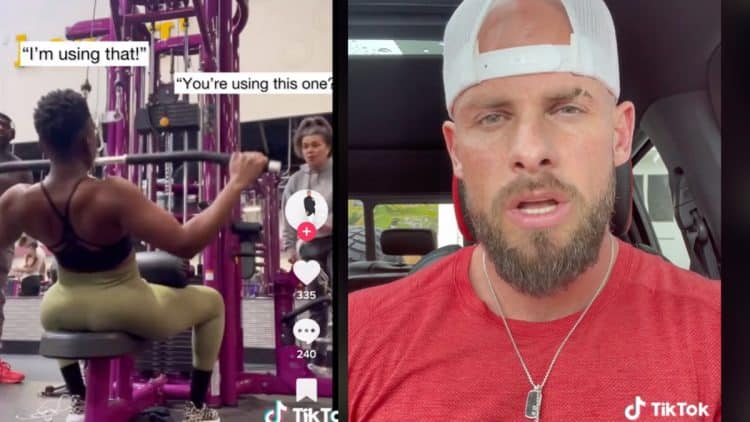 Fitness influencer Joey Swoll has developed a reputation for pushing back on the toxic gym culture that pervades many training facilities since the inception of social media platforms like TikTok. In a recent clip, Swoll took issue with a female TikToker who rudely refused to share the equipment with another gym-goer while performing supersets.

Joey Swoll is a popular influencer in the fitness space, with over 6.1 million followers and about 166 million likes on the short video-sharing platform. He encourages his fans to create a healthy environment at the gym and not mock others for likes online.

In June 2022, a female TikToker made headlines after getting kicked out of a gym. She alleged that a staff member was a pervert because he kept staring at her as she stripped down to a sports bra. Swoll pushed back against the baseless allegations and argued that she should not label someone a pervert just for attention on social media.

Swoll followed up with another clip reacting to another female TikToker who berated a man for leaving the squat rack in between use for a few minutes. She rebuked the man in an aggressive manner and continued to double down on her criticism despite an apology from the man. Swoll agreed that it was improper for the man to step away for long in between sets. However, he did not agree with how the woman handled it and stated she had no right to swear or threaten the man, especially after he apologized.

About half a year ago, Swoll made headlines for his take on a gym-goer who got mad at another man for practicing handstands in the gym. The adversarial man told the other to “do that sh*t” at home in response to the handstands. Swoll did not hesitate in bashing the person for doing something “completely uncalled for.”

In a recent TikTok video, Joey Swoll shared his reaction to a female TikToker who refused to share equipment with another woman due to ‘poor gym etiquette.’

“You’re upset that the woman didn’t ask you if you’re using a machine that you’re not on, not actively using, while you’re on another machine actively hitting a set,” said Swoll. “Then you want to post a video to bash her, to say that she’s rude, doesn’t have common courtesy, and use her as an example of what you think good gym etiquette should be. Really?

“First off let me say that woman did nothing wrong. I also think there’s nothing wrong with supersets. However, when you’re at a gym that gets busier, and somebody walks up to use the machine that you’re supersetting on, it’s normally good gym etiquette to let it go or have a conversation with them like a human being and just work in with them.

“But no, you decided to post this to bash her just for likes and attention… It’s really sad that people want to post videos like this, that you think you own the gym and can treat people this way. You need to do better. Mind your own business.”

The gym is a shared space, you don’t own it or the equipment. Always be kind and NEVER act like you’re better than anyone.

Unfortunately, incidents like these are becoming increasingly common. But that doesn’t mean that there will not be a pushback from Joey Swoll. Last September, a bodybuilder named Charly Joung faced the brunt of an angry gym-goer for practicing posing at the gym. While some gyms allow competitors to practice posing with their shirts off on the gym floor, others do not. In either case, Swoll believes no one should snap at another member in any gym.

A female TikToker posted a brief clip mocking others gym-goers for grunting loudly during the training session. Swoll did not like it one bit. He reacted by telling her to do better and encouraging her to create a safe space as a trainer where everyone feels welcome to work out.

Joey Swoll, who is known for calling attention to poor gym-etiquette, had to take a break from his usual routine....