The former Mr. Olympia champ feels the need to cut down the number of Mr. Olympia participants going forward. 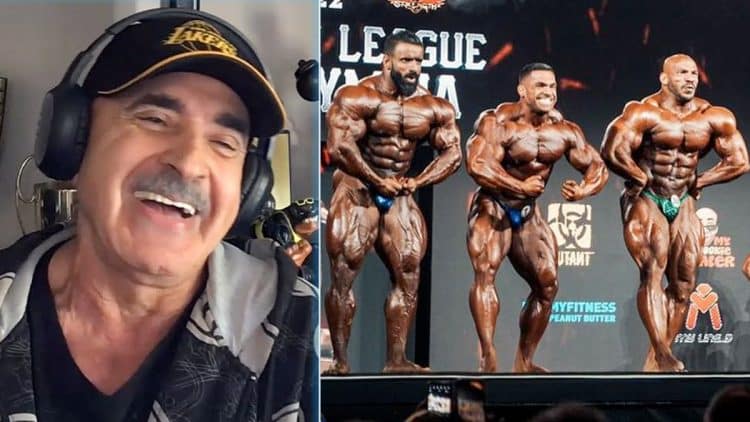 The IFBB Pro League has abandoned the point system and has established new deadlines to qualify for the 2023 Olympia. Veteran bodybuilder Samir Bannout discussed the implications of changes in the Olympia qualification criteria with Nick Trigili and John Hansen in the latest episode of the Muscle Maturity podcast. While it’s been a long time since former Mr. Olympia champion Samir Bannout retired, his passion for bodybuilding has kept him tied to the sport.

The 2022 Olympia was a memorable event that will remain in conversations for a long time. Be it Chris Bumstead’s fourth consecutive Classic Physique Olympia win or former two-time Mr. Olympia Mamdouh’ Big Ramy’ Elssbiay’s fifth-place finish, the Olympia weekend delivered some exciting results. However, there is always room for improvement when it comes to prize distribution, preserving the sport’s history, or even the competition format. The trio discussed potential solutions to some critical issues highlighted at the 2022 Olympia weekend. So without further delay, let’s see what Bannout, Trigili, and John Hansen had to say about it.

The IFBB made some changes to the 2023 Mr. Olympia qualification criteria. Unlike the previous year, when the winner of each contest and the top three bodybuilders in the points standings qualified for the 2022 Mr. Olympia, only the winners of each contest held during the qualification period will qualify for the 2023 Olympia. Hansen welcomed this change and stressed having a limited number of participants in each Olympia division.

“I think that’s good. I think that we need to cut back on the number of people that are in Olympia. It’s just too many, I think, you know. They should be the best of the best. Not 60 people or 40 people, you know,” Hansen opined.

Bannout seconded Hansen’s thoughts and stated that Olympia should never have more than 20 contestants.

“The cream of the crop should get on that stage. If you don’t make the top ten, it’s over. I think the top five should qualify again,” Bannout added.

Trigili drew attention to the fact that an overwhelmingly large number of pro shows take place every year, especially for the bikini and Men’s Physique divisions. This leads to a large number of athletes qualifying for the Mr. Olympia competition. However, there is a practical difficulty in cutting down the number of shows. Trigili added:

“I don’t know how they would do it without pissing off the promoters from them not being an Olympia qualifier. Because then it’s just going to funnel everybody to the particular shows to qualify. Then whatever’s left, people do those. You’re not gonna get the best athletes there. But something needs to change to build some type of tier system.”

The trio admitted that having a large number of athletes qualify for Olympia is undoubtedly a financially lucrative option for the IFBB Pro League and the Olympia management. However, Trigili feels that it is also ruining the show.

“A guy like Chris Bumstead – Honestly, I think he was the most conditioned and professional at the Olympia weekend, and his cheque was 50 thousand. And the third-place winner (In the Men’s Open division) took home a hundred thousand dollars. How do you f***ing explain that?” Bannout questioned.

He further stated that Jim Manion, or whoever makes the decisions about prize money, must ensure that the Classic Physique athletes get what they deserve.

“Mr. Olympia should be done in one day” — Bannout

The Men’s Open division is the only two-day competition at the Olympia that includes prejudging and finals that take place on two consecutive nights. However, every other divisional competition wraps up in one night.

“Not only does it suck for the Open guys having to peak two days in a very big time swing apart two different nights, and then you’re also dehydrating yourself for that long period of time. It’s not the healthiest thing, right? It just puts so many extra variables and things in there that these guys don’t need to worry about,” Trigili said.

Trigili’s claims are substantiated by the fact that Men’s Open bodybuilders peak for only one day for every competition other than the Super Bowl of bodybuilding.

“Mr. Olympia should be done in one day, in my opinion. A lot of people go and start using diuretics and try to look better the following day, and blah, blah, blah. You should be judged in that one day and get over with it,” Bannout added.

Bannout calls for preserving history through the Mr. Olympia show

Bodybuilding shows, particularly Mr. Olympia, have been criticized for less than optimal presentation regarding lighting quality, organization, and overall experience of attending the event. Bannout expressed his disappointment in the way Mr. Olympia was ‘dragged on’ and stated:

“I was in my hotel until 8:30. The show started at 7:00. I didn’t go there. I said if I just go there, it’s just going to go dragging and dragging and dragging. I’m really honest with you. No disrespect to anyone. I’m there to watch Mr. Olympia. That was the main reason I was there. I wasn’t feeling wonderful in the past couple of weeks. But even though I got there close to a quarter to nine, I was still frustrated because it continued to drag on. So that definitely should be modified. They should do something about it.”

Olympia has to preserve the sport’s history through the show

Trigili and Hansen opined that the Olympia management has to plan the show more efficiently and put more effort into highlighting and keeping the history of bodybuilding alive. The duo opined that playing the clips of former Mr. Olympia competitions and allotting front-row VIP seats to the former Olympia champions could be some of the ways to pay respect to the veterans of the sport.

“It’s really cool every decade, at least or every five-six years, bring every Mr. Olympia on stage for just two minutes, you know. And that’s gonna bring more atmosphere. The crowd would absolutely love that,” Bannout added.

2023 will be a special year for the Olympia and bodybuilding fans as the Masters Olympia competition returns after an eleven-year hiatus. Additionally, Olympia president Dan Solomon announced that the Mr. Olympia competition would return to Orlando, FL, in 2023. The show will take place in the first week of November. If the IFBB Pro League and the Olympia management fix some of the issues highlighted by Bannout and others in the podcast, the experience of attending the Mr. Olympia event or watching it on PPV will undoubtedly go up a notch.

You can watch the full podcast episode below, courtesy of Old School Labs’ YouTube channel:

Samir Bannout Calls Out Bodybuilders For Injecting Into Calf Muscle: ‘It Will Make Them Disappear’