Joey Swoll explained that gym etiquette can 'change from gym to gym': 'it should be universal that everyone feels welcome at the gym' 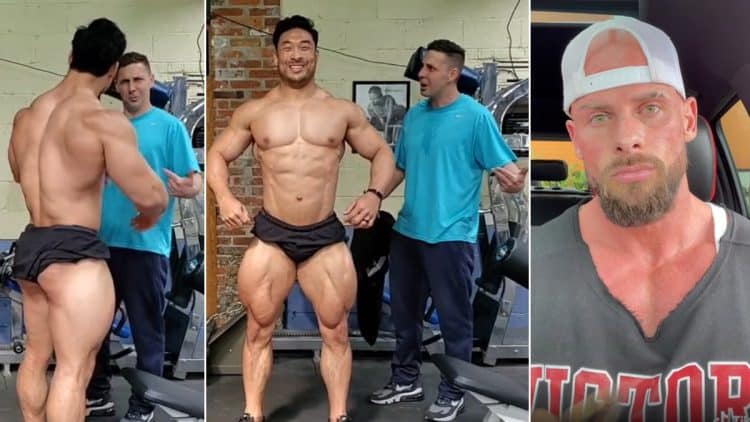 Fitness influencer Joey Swoll is continuing to fight against ‘toxic gym culture.’ In a recent TikTok video, Swoll reacted to a bodybuilder being harassed by a man for posing shirtless inside of a public gym.

TikTok, a popular social media streaming platform, has become the home for countless videos that have gone viral. Joey Swoll, who uses the app to fight against poor gym etiquette, has carved out his own niche on the platform, encouraging others to treat people with respect, especially when they flock to the gym or fitness centers.

Sometimes these encounters devolve into chaos, however. One such scenario saw a gym employee harassed by a female influencer who said she was being checked out while stripping down to a sports bra. After careful consideration, Swoll believes the man briefly glanced in her direction, and that there are major differences between that and intentionally staring.

This time, the viral encounter involved a bodybuilder (Charly Joung) who simply wanted to practice posing at his local gym. While hitting an impressive front lat spread, he was verbally assaulted by a fellow gym-goer. Some gyms allow shirtless posing, and others ban the practice. Check out the hostile encounter below and decide for yourself who is in the wrong.

Joey Swoll on TikTok Encounter: ‘This Man Had No Business to Curse at Him’

In Swoll’s TikTok video, he explained that different gyms have different policies. He added that everyone should feel welcome at gyms and be kind to others.

“This is a great example to show that gym etiquette can change from gym to gym. Different gyms have different environments, different policies. This is more of an old school bodybuilding style gym and it’s pretty common to see competitors posing with their shirts off on the gym floor. Now, let’s say if you got to a Crunch Gym or Planet Fitness or a 24 Hour Fitness — it’s against their policy and you won’t see it.

What should remain the same and universal at every gym is that everyone should feel welcome and you should always be kind to others. This man had no business to approach Charlie, to curse at him, to try and fight him — that should never happen,” says Joey Swoll.

Before concluding the video, Swoll praised Charly for handling the encounter in a “calm” and “reserved” manner. Charly Joung is an active bodybuilder who competed at two shows in the NPC last year.

“And Charly, I want to show you some love and support because not only do you look phenomenal but for you to handle the situation — to stay calm, stay reserved to just keep smiling and posing… brother, that is amazing. You deserve all the love. Be more like Charly,” Joey Swoll said.

We can all learn a lesson from him. Be more like Charly! 🙏🏼 @charlton_banks

Following the video, users flocked to the comment section to give their take on what had happened.

“Man. you have made me go back to the gym. Thanks from avg guys getting support from pro gym dudes,” one commenter wrote.

“Was his plan to get folded in front of his girl? That’s a no diff fight,” said another.

“Thank you for the positivity. Though hard at times, I try to keep a level head since we must strive to be positive role models, in the gym and in life,” one onlooker wrote.

“I love how he just laughs at how insecure the guy is, while simultaneously being 3x his size. He schooled him so hard,” a person wrote.

Fortunately, Charly, who was harassed in the video, was able to laugh off the encounter because sometimes these situations involve the police.

In August, a woman made headlines after she had a weighted ball thrown at her while attending a public gym. As a result of the scary ordeal, law enforcement subsequently banned the man from that gym location.

With the movement to change toxic gym culture growing, perhaps fitness centers and gyms will be more welcoming for all people. If not, Joey Swoll will continue his efforts in standing up for those who don’t feel the need to speak up.