John Haack seems to be breaking his records on a weekly basis. 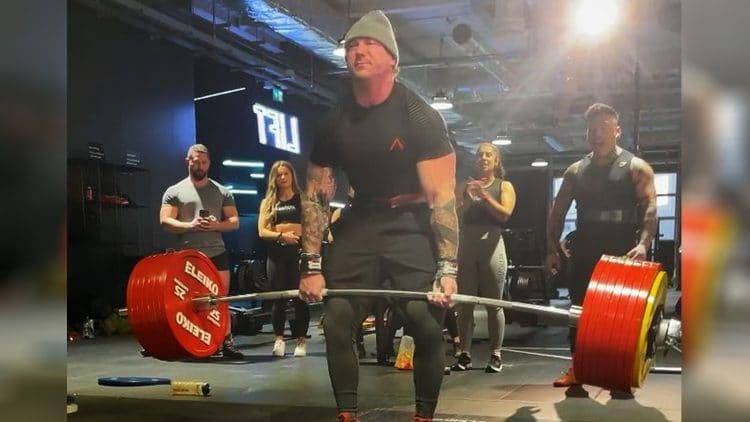 John Haack is getting the spotlight in the sport of powerlifting, and with a reason. It seems like he puts out PR lifts every week that leave even the best of powerlifters amazed. Since his world record performance in the 90 kg category, with a total of 1005.5 kg (2216.7 lbs) at the 2021 World Raw Powerlifting Federation, John keeps breaking his records in the gym.

We were able to see his colossal deadlift performance on a Twitch live stream event hosted by Gymshark and Brawn. John put on a show and deadlifted 410 kg (903.9 lbs), you can see it here:

We should also take into consideration multiple limiting factors involving this lift. John did this after a 12-hour flight and a lot of training behind him. John has had multiple deadlifts in the excess of 400 kg (881.8 lbs) involving his 405 kg PR ten days ago. The only accessories John used in the lift were a lifting belt and wrist wraps, while his style was a conventional deadlift with a mixed grip.

John Haack is now a part of the “900lbs deadlift club”, as he also became a part of the “600lbs bench club” a few days ago. We still don’t know how much John weighs, and the last information we got was that he is 96 kg, about 10 days ago. Assuming that John is still on the same weight, it would mean that this deadlift is more than 4x his body weight.

Sebastian Oreb – a powerlifter and strength coach, but is most known for coaching 2018 WSM Hafthor Bjornsson, simply commented:

Andy Huang – John Haack’s training partner and a guy who ranked first overall at the 2021 Kern US Open in the 125 kg category (raw with wraps).

“Should’ve done 2. I’m tired of you not reaching your potential.” said Huang.

Steve Gentili – a powerlifter known for still benching 500 lbs after kidney failure, and while waiting for a transplant, was also very impressed.

Some of Haack’s fans also commented and summed up what we all mean:

“Comical how strong this guy is.”

“You forgot to struggle.”

Considering how easy this deadlift looked for Haack, and his bench PR a few days ago, it is hard not to think that John Haack is in a league of his own right now. We could very easily see him break records in all three events and the total next year. Let’s hope 2022 will treat him even better than 2021.