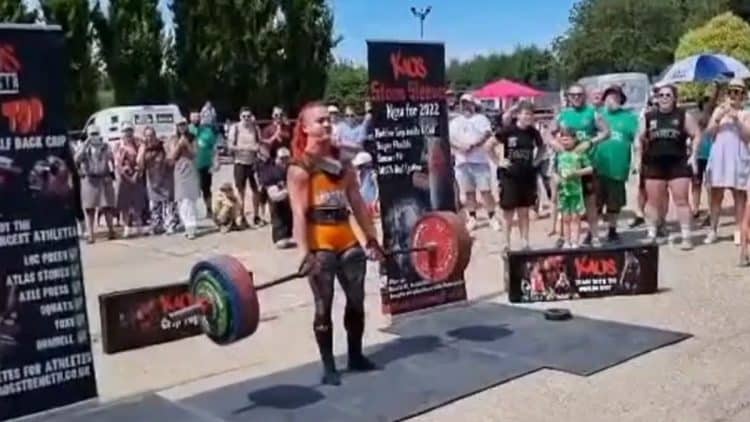 Just a few weeks ago, Rhianon Lovelace posted the heaviest deadlift of her career, a performance she achieved during training. However, it was just part of her preparation for a heavier lift to come. Rhianon was getting ready for the 2022 Berkshire’s Strongest, which took place recently on July 16, 2022. She did not participate in the full contest but simply came to break the World Record. It is not at all surprising that Rhianon was successful in her attempt to do so, as she deadlifted 282.5 kilograms (622.8 pounds) in the process.

With this mind-blowing lift, Rhianon Lovelace beat the previous World Record by a huge 10 kilograms (22 pounds). She also held the previous record of 272.5 kilograms (600.8 pounds), which she set at the 2020 Strength Shop Record Breakers.

Rhianon Lovelace utilized a deadlift suit, lifting belt, and lifting straps to complete the record-breaking 282.5-kilogram (622.8-pound) deadlift. With a very narrow conventional stance, Rhianon explosively pulled the bar off the floor. However, it seemed to get stuck just after going over her knees. Hearing the electrifying crowd cheer for her, Rhianon pushed herself beyond the limits and locked out the World Record. She also weighed in at 62.5 kilograms (137.8 pounds) for this occasion. In addition, this lift turned out to be 4.52x Rhianon’s bodyweight.

Officially over the 4.5x Bodyweight Mark.

Rhianon Lovelace explained her thought process behind the World Record attempt on her Instagram stories. She had the opportunity to just break the world record by lifting 273 kilograms (601.9 pounds), but decided to risk it all and add 10 more kilograms (22 pounds). Her goal was not just to break the record, but also to ensure that she gave it her all.

“We are going for all or nothing today. We had an easier road and a gamble. I am gonna gamble. I did not come here to play. It’s been two years since I hit this record, I am not walking away knowing I picked the easier option.”

Rhianon Lovelace has broken three deadlift records in the past two months. She firstly set a new Axle Deadlift World Record of 515 pounds (233.6 kilograms) at the 2022 Clash of the 64’s. Rhianon then made a temporary switch to powerlifting and also scored a 241-kilogram (530-pound) British Raw Deadlift Record. Finally, she set this 282.5-kilogram (622.8-pound) World Record.

It seems that breaking World Records became an ordinary occasion for Rhianon Lovelace, as she breaks one every time she competes. But then again, Rhianon has crowned the Pound-For-Pound Strongest Woman In The World. So, putting up historic lifts is what she does best.