"The Boogieman" and Iain Valliere ignited a rivalry over the weekend as they both eye a top placing at the upcoming 2022 Mr. Olympia contest. 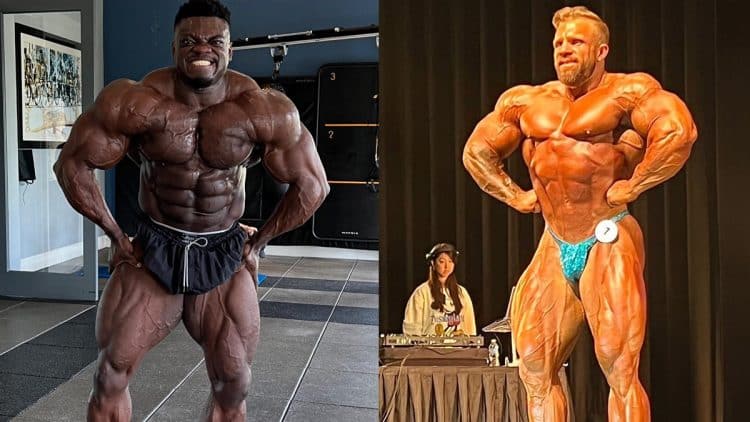 With 2022 Olympia preparations heating up for athletes, another rivalry formed over the weekend between Men’s Open competitors Iain Valliere and Blessing Awodibu. After going back and forth on Instagram, Valliere insisted that Awodibu is not a top bodybuilder despite the success he saw earlier this year.

With less than five months until the most prestigious event of the year, athletes are scurrying to either earn their Olympia qualification or prepare their physique for the highly anticipated event. Men’s Open standouts Iain Valliere and Blessing Awodibu, however, have already earned their invitations to compete at Olympia this winter.

Awodibu was on a quest for redemption after a rocky season last year. He earned third place in his Open class debut at the 2021 Indy Pro. Before the year could end, Blessing took on the 2021 New York Pro and walked away in sixth place.

Eager to win his first IFBB Pro League show, Awodibu brought improvements to the stage recently at the 2022 Indy Pro, when he took first place in dominant fashion en route to earning his 2022 Olympia qualification. He clearly made noticeable changes to his lower body and proceeded to win a second show in a row at the 2022 New York Pro, defeating the likes of Andrea Presti, Maxx Charles, and fifth place 2021 Arnold Classic finisher Justin Rodriguez.

Iain Valliere, on the other hand, is a proven commodity in the Men’s Open division. Valliere has already shown he can compete with some of the world’s best at past Olympia contests. Valliere placed second at the 2020 Tampa Pro before winning the New York Pro title. He brought his conditioned build to the Olympia competition that same year, where he placed seventh in his debut at the event.

2021 proved to be a dominant year for the Canadian native. He won gold at the 2021 Texas Pro, before defending his title at the Tampa Pro with a first-place finish. He placed second behind Nick Walker at the 2021 Arnold Classic and turned in a seventh place finish once again at Mr. Olympia last year.

Iain recently punched his ticket to 2022 Olympia a few weeks ago after defeating Antoine Vaillant in a close battle at the 2022 Vancouver Pro.  As a result of this victory, Valliere earned his invitation to Olympia and is already firing shots at one competitor he refuses to take seriously as a contender.

Below, you can find the Instagram post that 2022 Chicago Pro winner Antoine Vaillant made, which prompted Valliere and Awodibu to trade barbs online. 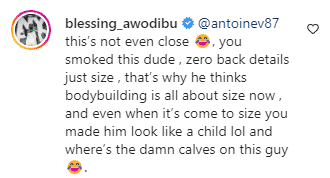 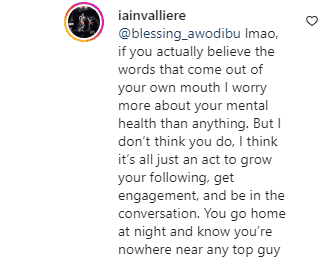 According to Valliere, most of Awodibu’s online beefs are used to create engagement with fans. He said, “The Boogieman” doesn’t truly believe he can hang with any of the top bodybuilders in the world. 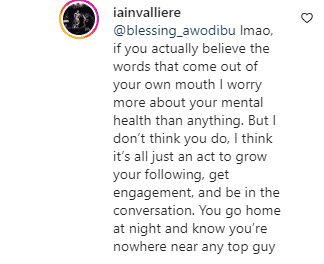 Awodibu responded by saying Iain should tattoo ‘7’ on his forehead since the bodybuilder likes to reference himself as a top-seven bodybuilder so often. Valliere believes Awodibu will be in the fourth call-out at Olympia and won’t get close to any of the top athletes.

Blessing believes the sport is changing and soon judges will favor aesthetics and ‘artistic’ physiques over sheer size and muscularity. Valliere added that if Blessing favors aesthetics more than size, he should try out the Classic Physique division. In a different era, Awodibu argued that Iain’s physique wouldn’t even crack the top 50. 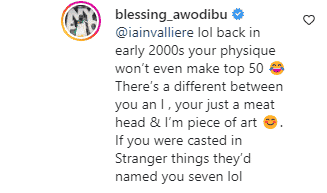 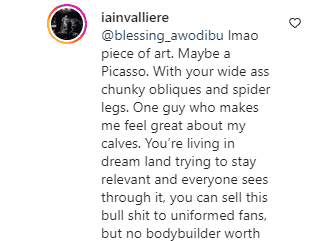 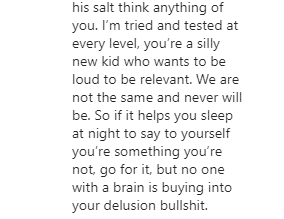 This year’s Olympia contest promises to be an exciting event. In preparation for the massive show, Valliere has trained alongside three-time Classic Physique Olympia champion Chris Bumstead. The two bodybuilders have remained busy in the off-season and recently showed off an intense quad workout.

Awodibu has also left no stones unturned while training this year. Following back-to-back victories, Awodibu linked up with bodybuilding veteran Kai Greene to channel some ‘Big Boogie Energy’. During the session, Awodibu focused on improving his mind-muscle connection while preparing his physique for 2022 Mr. Olympia.

With a stacked lineup of talent expected at Olympia, this year’s contest is shaping up to be one of the most competitive. Despite the recent hostility between Awodibu and Valliere, the two bodybuilders will have a chance to settle the rivalry on December 15 -18th, on the Mr. Olympia stage.