Joseph Baena speaks to influencer Bradley Martyn about finding his identity: ' He's the GOAT. I struggled with comparisons [to my dad] and figuring out my own path' 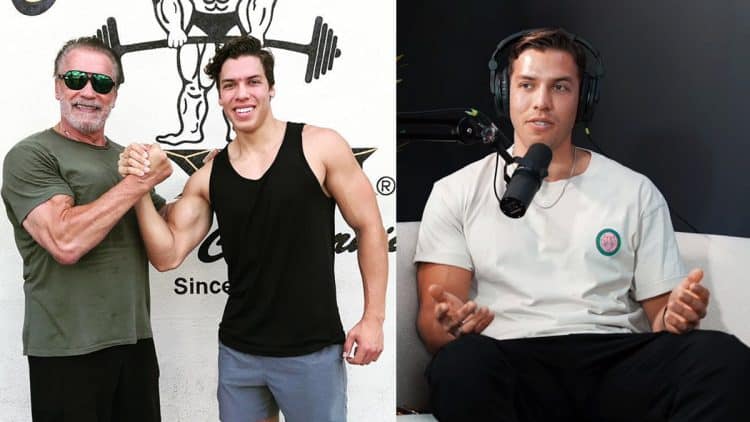 Joseph Baena, son of bodybuilding legend Arnold Schwarzenegger, wasn’t always as connected to fitness as he is now. In an interview with influencer Bradley Martyn, Baena reflected on the confidence fitness brought him and the expectations that came with being Schwarzenegger’s son.

Baena is a spitting image of his father, seven-time Mr. Olympia Arnold Schwarzenegger. His uncanny resemblance to the “Austrian Oak” has been brought into the limelight on several occasions. Joseph recently reenacted one of his father’s infamous bodybuilding poses, which left many fans in awe of their similarities.

It remains to be seen if Joseph plans to pursue a bodybuilding career but his commitment to fitness hasn’t waned since his days of attending college. In fact, Joseph remembered a time when he was the chubby kid in his group of friends. However, his interest for fitness and bodybuilding helped him get on the right track. Eventually, Baena found himself with an addiction to training in the gym.

Aside from building an impressive physique, Baena has focused on kickstarting a career in Hollywood. He has taken part in acting projects like Lava and even bulked up for his role in the action film Call of Duty: The Last Airshow.

Bradley Martyn is a fitness influencer known for his impressive feats of strength. He has a massive social media following and routinely hosts Raw Talk, a podcast where he welcomes guests to discuss a wide range of topics. His latest episode included Baena, who discussed fitness as well as the struggle of living in the shadow of bodybuilding icon Schwarzenegger.

Joseph Baena on Living in Arnold Schwarzenegger’s Shadow: “I’m Not Following Anyone. I’m Following Myself”

During the video with Bradley Martyn, Baena reflected on getting into fitness despite his father never pushing him to do so.

“Yeah. I mean he’s the GOAT. I mean, non-biased. He’s the GOAT. Joseph explained. “Yeah. I wouldn’t say it’s a huge pressure that everyone has put on me. I could do whatever I want. No one has pushed me into bodybuilding. My dad never said you should be a bodybuilder. He’s never even said you should get into movies. It all just came from me and my passion to do it.” Joseph Baena shared.

Baena told Bradley that Schwarzenegger is a “huge” inspiration and that Arnold managed to create a prosperous life even though he started from nothing.

“I’m not necessarily chasing my dad but the main thing is… his physique, like many other people, his physique and what he’s done with fitness is a huge inspiration to me. I take that and I’m constantly pushing myself to live up to that expectation. I know he came from nothing. He was an immigrant, he came from Austria, so young with no money. So, I’m constantly thinking, ‘oh well if he did it without all these things,’ then I should be able to do it.”

Joseph says he’s always struggled with comparisons to his father.

“That’s always been something I struggled with is comparisons and figuring out my own path and not trying to be in someone’s shadow. All these kind of different things but I think what I found for myself was that – I needed to accept who I am, what that is in relation to me, what my relationship with is with my family and the main thing is I’m not following anyone. I’m following myself. I’m pushing myself. As long as I’m putting 110% in then nothing really matters. My family knows that. Everyone knows that.”

Baena Reflects on Building his Confidence

According to Baena, he wasn’t comfortable with himself in many respects until he acquired confidence.

After shooting his first film and putting his real estate license to use, Baena started to realize he was on the right track, which added to his overall confidence.

“That was the main thing. The confidence wasn’t there at the time. That’s when it would kind of pick at me. Joseph Baena told Bradley Martyn. “Overall. Once I did my first film. Once I got to a physique level that I was comfortable with and really happy about.”

“Once I got my realtors license and sold my first home, that was huge. Now, I’m like, I can care less about what anyone’s saying. Now, it’s like, yeah, he’s my pops but what about it?”

Before ending the discussion, Joseph said no matter what you do in life, there will always be people who criticize.

“Another realization that, yeah, there’s always going to be someone that talks bad, no matter what. You can win the Nobel Peace Prize and someone’s going to talk shit about you for no apparent reason. It could just be a troll. The thing is not to take it to heart at all. One, you don’t know these people. Two, it’s just noise and it’s going to constantly happen.”

“When I see comments and stuff. It’s like, ‘oh man.’ Then, the next day I don’t even remember.”

Living in Arnold Schwarzenegger’s footsteps is no doubt a challenge. Despite never competing at a bodybuilding show, Baena takes training and building his physique seriously. He recently connected with veteran Mike O’Hearn to smash biceps and triceps on arm day.

Despite high expectations, Joseph Baena uses his father’s success as an inspiration. After speaking with Martyn, it’s evident Baena appreciates fitness and respects the decorated bodybuilding career his father left behind.

How Much Weight Can I Lose in Four Months?