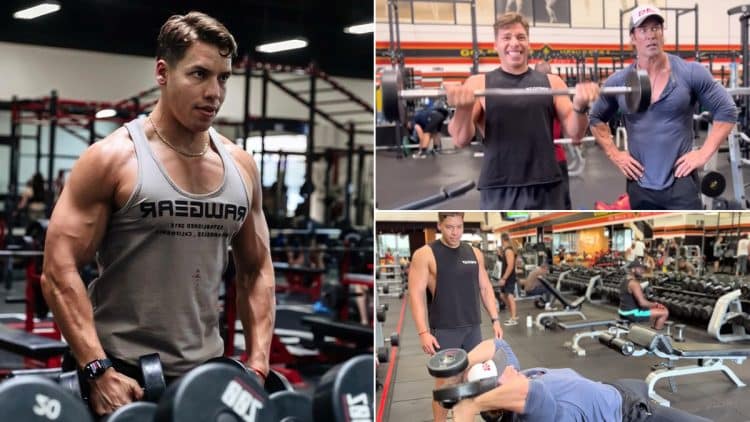 Mike O’Hearn and Arnold Schwarzenegger’s son Joseph Baena recently joined hands for an arms workout session. O’Hearn is an all-natural bodybuilder that carries an impeccable Physique all year round at 53 years of age. Over the course of his 30-plus years career, the natty Greek god has worked in diverse fields like martial arts, powerlifting Strongman, acting, bodybuilding, and fitness modeling. While many people have questioned his claim of being all-natural, O’Hearn has never tested positive for any of the competitive drug tests. Instead, he has presented his case with dignity whenever questioned.

The love for bodybuilding that Joseph Baena has inherited from his father Arnold Schwarzenegger is something that he is truly passionate about. The 25-year-old frequently recreates Arnold’s iconic bodybuilding poses in the gym. Although he has not competed in professional bodybuilding competitions, Baena certainly has the genetics to compete if he decides to do so.

The duo recently trained arms together in the Gold’s gym. The video of this session was uploaded on Mike O’Hearn’s YouTube channel. O’Hearn decided to do a few sets of reverse grip bench press before Joseph Baena showed up at the gym. The purpose of these warmup sets was to prepare the body for the heavy workout that would follow.

For this particular session, Mike O’Hearn followed Joseph Baena’s workout to get a feel of his training methods. The relatively short workout session consisted of a superset of lying dumbbell extensions/Incline for triceps and standing straight bar curls for biceps.

“So what I usually like to do with the triceps is superset with a little biceps to get the full pump. So you get the stretch, the squeeze on both ends,” Joseph Baena said.

For the uninitiated, a superset is performing two different exercises back to back with very short rest periods in between. In traditional training, a person performs all the sets of first exercise and then proceeds to do the next exercise. For supersets, the individual performs the first set of the second exercise immediately after the first set of the first exercise. In both methods, the number of sets is typically the same. However, supersets result in shorter workout times.

They also increase the aerobic intensity of the workout due to shorter rest periods. Through supersets, muscle growth and fat burning can both be achieved.

Mike O’Hearn noticed Joseph Baena’s Triceps extension technique. Instead of moving the hands in a hammer grip position throughout the rep, Baena curled the wrists while bringing the dumbbells up. While speaking about Baena’s form and the intensity of his movements, O’Hearn said:

“I don’t know if you guys see this but to me it looks like he is on stage and he is posing through the exercise. Tue youngsters go – “Oh, he flexed through the whole exercise? You don’t just lift it?” This is what you are doing. You’re posing and moving the waist. If he knows it at that age before I knew it at that age, how much better is he gonna be than I ever was!”

As far as training goes, both Baena and O’Hearn worked together synergistically. As they deliver a fast-paced, muscle-crushing workout, they emphasize simple, practical exercises accompanied by slight variations between sets.

The duo finished the superset with perfect form and technique with slow reps and wrapped up the arms training session.

A lot of gym-goers focus on the number of reps per set and that eventually defines their idea of a good workout. Towards the end of the workout, Joseph Baena and Mike O’Hearn shared important insights on how people need to approach the rep range for maximum gains.

“Having the 10 to 12 reps mentality, you’re gonna get a little blood in the muscles. But you don’t start counting until you really feel the burn. When you feel the burn, that’s when you feel the real growth. You can push a little past that. That’s how you get the real growth. You need to rip the (muscle) fibers, you need to tear through the fibers in the muscles. So you can grow back bigger muscles and fill more blood up.”

Mike O’Hearn has been in the industry for over 30 years and has a vast store of knowledge and insights that most of us can only dream of having. Despite being 53, Mike O’Hearn still looks lean and muscular. On the other hand, Joseph Baena – who is relatively younger – is the son of one of the greatest bodybuilders of all time.

He has access to Arnold Schwarzenegger’s knowledge and information. With the advent of the internet and social media, all of that is available for us just with a click of a button. That’s the beauty of such workout videos.