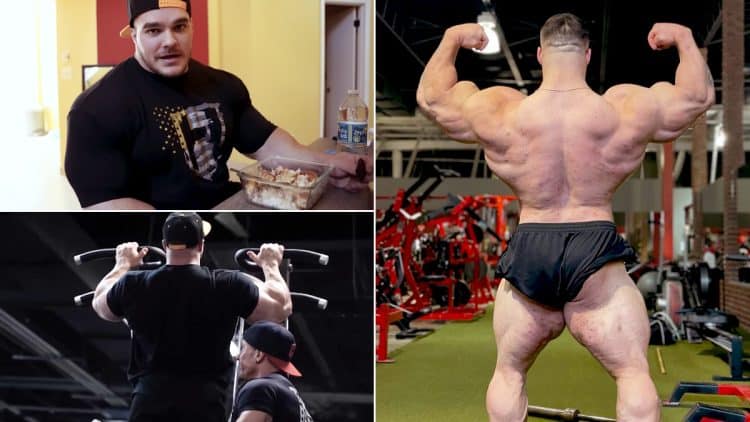 Bodybuilder Nick Walker recently shared a back workout and gave an overview of his 2022 Olympia prep. The 27-year-old Open Pro competitor has emerged as a force to reckon with in the division. Within a year after earning the pro card, Nick Walker went on to win the 2021 New York Pro and the 2021 Arnold Classic. He ended the year with a respectable fifth-place finish at the 2021 Olympia. Following this, Walker took some time off from competitions to focus on improving his physique before returning to Olympia later this year to compete against some of the world’s most elite bodybuilders.

Recently, Nick Walker kicked off his 2022 Olympia prep with a chest workout. The third episode of the Olympia prep series features Nick Walker working out his back with coach Dominick Brandon Mutascio. Below is a video demonstrating a back workout and a breakdown of what the workout entails.

Nick Walker was having his pre-workout meal – jasmine rice, almond butter, and chicken – when the video started.  Dominick Mutascio had his pre-workout meal that consisted of three ounces of chicken, one ounce of steak, 56 grams of Cream rice, and two egg whites. He stated that he recently reduced the portion as higher portions disrupted his digestion during training.

“Nick’s strongest attribute that makes him so good is that he’s gone years without missing a meal. Which by far, I can tell you is the most important variable to determine how successful you are is your consistency…” Dominick Mutascio said.

Nick Walker last competed at the 2021 Olympia and he has focused his energies on improving his Physique ever since. According to Dominick Mutascio, Walker put on approximately 8lbs of stage tissue during this time. Therefore adding more muscle will not be a primary objective of this prep.

“If we’re able to get an inch off of his waistline, that would be equal to putting on another 10lbs of tissue,” Dominick Mutascio said.

In order to achieve this, Mutascio is planning to incorporate more lean proteins like slow-cooked or poached chicken that are easy to break down. While this can be easily achieved with fish, according to Mutascio, it is technically an unpalatable food option for Walker personally.

“When you have a diet that is high in protein, it’s a lot for the body to break it down. So we will start off by doing that stuff with his lean protein sources and then limiting inflammatory based foods like whole eggs, red meats and swapping that out for other fat sources like macadamia nut oil, avocado and things along those lines,” Dominick Mutascio added.

Nick Walker’s diet and training go hand in hand for this prep season. According to Mutascio, three training days are followed by a rest day which is also a lower carb and higher fat day. Leg day is the day after the rest day which also happens to be a higher carb and lower fat day in his diet.

“We’re crushing his legs every four to five days depending on how his body feels,” Dominick Mutascio said.

Nick Walker then headed to the gym and proceeded to the back workout. Coach Mutascio started the workout with some mobility drills and breathing exercises before getting into the heavy lifting.

“This is extremely, extremely important. These are some of the details people don’t really see in bodybuilding but are going to play a big factor are posing and his mobility in the gym and also bringing his waistline down,” Mutascio explained.

Walker warmed up with breathing exercises and mobility stretches prior to beginning the workout. He then performs an inclined plank. The exact sequence of the exercises, rep range, and sets were not revealed in the video. However, the overall workout consisted of:

Coach Mutascio said that he does not have standardized training plans for the athletes he trains. Instead, he prefers to formulate a training regime based on the individual’s response to all the movements.

“So every time I train with (Nick Walker), I learn something new about his body. I like to do a lot of pull-down motions but I can tell he doesn’t get the best contractions doing those. He actually gets better ones with seated rows and free weight bent-over rows. Those are really his staple exercises,” Mutascio said.

Nick Walker stated that he already has enough size. Therefore the goal of his competition prep will be to add more details to his muscles and refinement.

Nick Walker had already established himself as a top-five Olympia contender in his debut show. It is certain that the work he has put in during the off-season and the meticulously designed prep will bring an even better version of Nick Walker to the stage at the 2022 Olympia.

Needless to say, the last mile is also the most difficult one and Walker has to get past killers like reigning champion Mamdouh ‘Big Ramy’ Elssbiay, Brandon Curry, and Hunter Labrada to win the Olympia crown. Based on the progress that he has made in the gym, it certainly appears to be a task that he can achieve.

Courtesy of Nick Walker’s YouTube channel, you can watch the full video here: