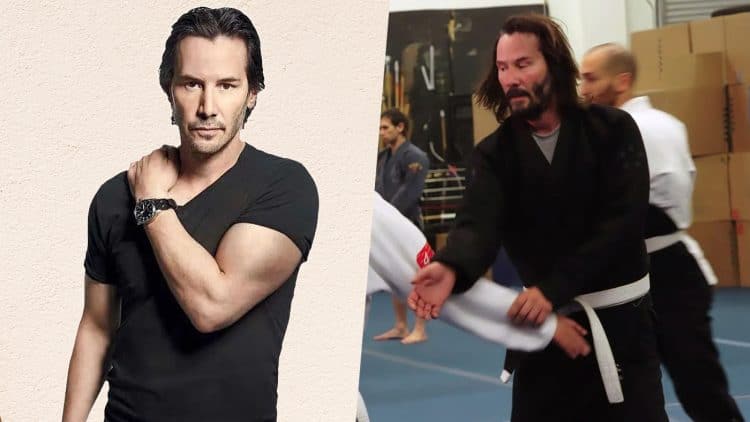 Keanu Reeves has played many roles in world-class films, most of which are action classics like Speed, the John Wick series and The Matrix. What is even more shocking about him, is the fact that he performs a number of his stunts in these movies. This is not something most Hollywood stars do and that is why they have stunt doubles.

In order for Keanu Reeves to perform some of these stunts that leave us in awe, he has to train a lot as you can’t just wake up and go fight an entire Russian mob. Keanu’s training routine requires a lot of discipline and consistency. It is no surprise that his workout routine consists of mixed martial arts training, strength-training and cardio.

In this read, we shall look to extensively highlight the Keanu Reeves John Wick diet and workout plan.

Keanu Reeves: A Legend in One’s Own Lifetime

Keanu Charles Reeves was born on September 2, 1964. He was born in Beirut, Lebanon to English and American parents and is of Chinese- Hawaiian and European descent.

Keanu’s mother was a performer and costume designer while his father was a Hawaiian geologist. His parents divorced while he was young and he had to live most of his life with his mother. Reeves and his mother moved around before finally settling down in Toronto, where he was raised for the most part.

Due to all the moving around and his parents’ divorce, Keanu really struggled in school. He attended four different high schools, one of which was focused on the arts which really helped in his career choice.

Before the Hollywood superstar decided to pursue acting, he was seriously considering a career in ice hockey. This was mainly influenced by the fact that he was living in Toronto and ice hockey is a big thing there. Reeves was actually really good at ice hockey as he was once voted as the most valuable player. Keanu was about to start his professional career as an ice hockey player, but changed his mind after getting injured and going on a trip to New York City.

After graduating from high school, Keanu Reeves started taking acting classes at night before joining community theater productions. His first professional acting role was in ‘Hanging In’ where he played a tough street kid.

Despite playing so many roles, Keanu gained recognition after his spectacular performance in ‘Bill & Ted’s Excellent Adventure’. Although the movie received mixed reviews, everyone agreed that the Canadian actor stood out while portraying his role. He then went ahead to take part in Parenthood, Point Break and My Own Private Idaho.

Reeves is a man of many talents and in the 1990s, he was a bass player for an alternative rock band. He was with the band for several years until the band members decided to go their separate ways.

Keanu was already a household name in Hollywood, and the role he played in the movie, ‘Speed’ propelled his superstar status even more. After ‘Speed’, he got a part in the 1999 sci-fi action movie, ‘The Matrix’. The Matrix cemented his name as one of the greats to this very day.

Although not so much is known about the Hollywood superstar’s love life, in 1998, he met his then girlfriend Jennifer Syme. The two had plans to settle down and were even expecting a child together. In 1999, the couple’s daughter was a still birth and this led to Syme experiencing postpartum depression. The grief that they experienced eventually led to their breakup but the two still remained friends until Syme died in 2001.

In 2014, Keanu Reeves took part in ‘John Wick’ which ended up being a big success both commercially and critically. This led to the John Wick franchise which has 3 films to this day and a fourth installment is set to be released on May 27, 2022.

When you look at Keanu Reeves, what first goes through your mind? For most people, it’s that he must have a very restrictive diet to help maintain his slim athletic body. What’s even surprising is that this is as far from the truth as ever. If we were to give a name to his diet plan, it would be the ‘moderation diet’. The A-list actor does not follow low-carb diets or vegan diets or any other famous diet that most people follow. He just eats everything in moderation.

The key to Keanu’s slim athletic physique is balance; no overindulging and sticking to clean, healthy foods. He also occasionally goes for a glass of wine, beer or a single malt just like most of us.

One thing that we can confidently say he stays away from, is junk food. Keanu understands that most junk food is low in nutritional value. Junk food is bad as it is usually high in sodium and this can cause headaches and migraines, as well as water retention leading to bloating.

Junk food is also known to be high in empty carbs and this is known to cause acne breakouts and can also lead to an increase in blood sugar and insulin resistance. The large amounts of sugar in junk food can cause dental cavities and fast foods that are filled with trans fat can cause a rise in cholesterol and this might increase the risk of various cardiovascular conditions. In order to curb his cravings, Reeves eats nutritious snacks.

When Keanu Charles is training for a role like John Wick, he eats low sodium and low fat foods. On nights before a big fight scene, Keanu is said to cook or order a juicy steak with a little fat on it. This has nothing to do with his diet and it is purely psychological.

That is all there is to know about the film star’s diet program.

When training for John Wick 3, Reeves sought the help of Taran Butler, who is a tactical expert. Taran helped him become a firearms and munitions expert.

Apart from learning how to handle guns, the Hollywood superstar’s training program also involves a lot of martial arts. He trains like most stuntmen do.

Keanu started training for his role in John Wick, 4 to 5 months before they began shooting the movie. He would train for approximately 5 hours every day. He practiced mixed martial arts including jujutsu, Brazilian Jiu-Jitsu, judo and tactical shooting. His mixed martial arts’ workout routine is so intense that it is believed to be at par with training for a Brazilian Jiu-Jitsu tournament.

After his martial arts and tactical training, the Canadian actor’s workout program also consists of various joint stability and flexibility exercises. He also does resistance training but does not use traditional weights like most people. John Wick uses resistance bands instead. He prefers to use resistance bands because they are easy on the joints.

That is not all; as you can see, training to play a dangerous hitman is not easy, especially if you prefer to perform some of your stunts. Keanu’s workout routine also involves various unilateral movements. Unilateral movements are single-leg or single-arm movements like ice skaters and single-leg pistol squats.

Finally, Reeves also does a circuit workout. The circuit workout routine involves doing different exercises in quick succession. He does 20 reps per exercise with a small rest period between each one and about 2 minutes rest after completing each round. Keanu performs 6 rounds in order to complete his circuit training program.

The exercises in his circuit workout are:

When it comes to action movies, Keanu Reeves is one of the best to ever do it. His agility and reflexes are unmatched. The fact that he performs some of his stunts shows that he is really on a level of his own. The Keanu Reeves diet program is not a restrictive diet program, but a program that emphasizes on moderation which shows you don’t need to try extreme diet plans just to get slim and athletic.

As for his workout program, you can clearly see that it does not focus on bulking up but on other things like speed, agility, function movement and functional strength. If your desire is to be just like Keanu, you can use the Keanu Reeves diet and workout program to create a diet and training program that works specifically for you. Most of his training requires the help of an expert hence it would be advisable for you to do the same.

How Long Does It Take to Get a Flat Stomach?

As a British Royal Marine, I had the pleasure of working with the USMC (United States Marine Corps) on several...