Try this complex yet very effective and functional movement. 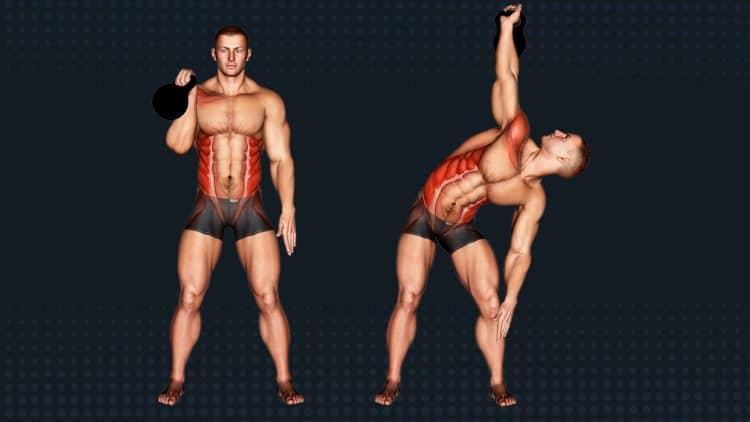 The kettlebell bent press isn’t your everyday exercise however that doesn’t mean it’s not as beneficial. In fact, this movement challenges certain aspects of movement that most don’t often pay attention to.

In this guide, we’ve shared almost everything you’ll need to know to perform this exercise plus you’ll learn the muscles worked, what alternatives and variations you can do, and more.

Let’s go over the main muscle groups that perform the primary movements or contribute to the kettlebell bent press.

The deltoid anterior or front deltoids spit the shoulder muscles anatomy with two other heads – lateral and posterior. However, they all have a separate role when it comes to moving the upper arm. The front deltoids, for example, lift the arm forward into a flexed position (e.g., greeting someone with a handshake).

It’s the job of the outer deltoid muscles to raise the arm up and away from the body however, it’s only capable of doing this between 15 and 100 degrees. Lateral deltoids are involved in every pressing movement like the front delts.

The clavicular head of the pectoralis major has its position below the clavicle bone on the upper chest. It actually has its own section of muscles fibers that perform a separate function from the sternal lower chest fibers which is to flex the extended arm. An example is raising the arms overhead to lift a weight.

Twisting or rotating your torso activates the oblique core muscles. They also help to flex the trunk laterally to either side which is a major action during kettlebell bent press.

How To Do The Kettlebell Bent Press

This is by no means a simple movement to perform. Therefore, it’s important that you start with a very manageable weight and really focus on doing each step correctly.

To ensure you do it properly we’ve included step-by-step instructions. We do recommend that you understand how to do a kettlebell clean and have decent flexibility and joint mobility before you attempt the kettlebell bent press.

With a slightly wider than hip-width stance, or using a foot position comfortable for you, clean the kettlebell to the front rack position.

Now, twist to the same direction as the hand holding the kettlebell keeping your arm pressed against the lat/torso. Pretend as if you are trying to push your elbow into your back pocket.

This should allow you to comfortably support the weight-holding arm using your hip as you bend in the opposite direction. Keep the elbow directly under the hand/maintain a vertical forearm.

Rotate your upper body like a corkscrew and hinge forward while keeping your arm stationary as you dip down under the weight. Your arm should extend and you may squat down a little to ensure this.

Keep your eyes in the same direction as the weight.

Do a corkscrew motion to stand back up while keeping the arm extended.

Why do we do certain exercises? The answer to that is simple – they offer benefits (who doesn’t like benefits?).

Because you are forced to maintain the arm extended overhead using resistance, the kettlebell bent press is a great exercise for strengthening the shoulder using an unconventional position.

All presses require good shoulder strength and especially overhead presses. This carries over to Olympic lifts and those days when you need to hit personal record lifts because it helps with not just strength but locking out at the top as well.

Most people never do movements like this one and as a result, they don’t experience all of the benefits possible from training. The thoracic (spine) flexibility and mobility involved in this exercise transfer over to other movements and activities that require you to move the body through deeper ranges of motion.

The kettlebell bent press involves moving the body under the weight for successful execution of the movement. This is typical of Olympic lifts.

The kettlebell bent press seems to be an excellent exercise both for its benefits and breaking up the monotony of doing the same movements over and over.

But we also recommend these variations whether they suit you better or offer something different.

Dumbbells are no doubt a more common training tool than kettlebells. You can do this exercise using a dumbbell instead. It should offer many of the same benefits.

Do the kettlebell bent press and after you stand up with the arm extended, perform a squat keeping the arm overhead and then transition into another bent press. Alternate between both movements.

While a much more involved movement, the Turkish get-up has a lot of similarities to a bent press. It’s a great option for learning positional awareness and offers great physical benefits too.

You’ll need two kettlebells for this variation. While you’ll perform the exercise using one dumbbell, set another one on the ground and before you stand up to finish the movement, grab the kettlebell on the floor so that you’re doing the bent press with one and a deadlift using the other.

While no doubt much more challenging, you can also do a bent press using a barbell.

The setup is similar to the Steinborn squat – an exercise variation that people actually used before the invention of squat racks.

Learn about the Steinborn squat and how to do it here.

It requires a well-rounded individual to pull this off especially with added weight to the bar.

You should be advanced to do this variation.

The kettlebell bent press is a movement that we recommend for powerful shoulders, thoracic flexibility, and building overall power and function.

It’s not the simplest exercise to perform but it’s a good idea to incorporate similar types of movements in your training for well-roundedness.