There are lots of different ways to do push-ups, and they all have benefits. Knuckle push-ups are one of the most hardcore variations. Learn how to do this exercise correctly so that you can get the most from this martial arts push-up favorite. 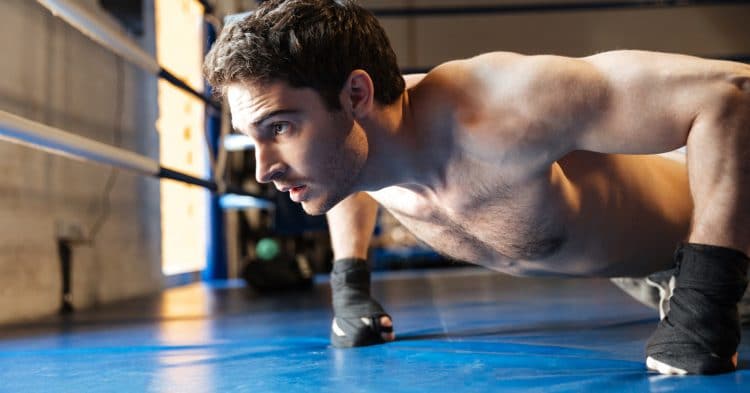 While it’s impossible to prove, push-ups are probably the most widely performed exercise on the planet. Just about everyone who works out has done push-ups at some time, from raw beginners to elite athletes. People have been doing push-ups for thousands of years; they’re part of fitness history. Long before the barbell bench press was invented, people used push-ups to build muscle, strength, and endurance.

Fast forward to the 21stcentury, and push-ups are still immensely popular, and there are lots of different push-up variations to try.

Some, like kneeling push-ups, are ideal for novices. Others, like one-arm and handstand push-ups, are much more advanced. Whatever level you are currently at, there is a type of push-up for you. Check out these 13 next level push-up variations for mass, strength, and performance.

In this article, we explain how to do knuckle push-ups and reveal the benefits and drawbacks of doing push-ups on your fists.

What Are Knuckle Push-Ups?

Knuckle push-ups are so-called because, instead of resting on your flat palms, you do your push-ups with your weight resting on your closed fists. This push-up variation is popular with boxers, martial artists, and other fighters as it replicates punching.

Pectoralis major – known as the pecs for short, these are your main chest muscles. Their primary functions are adduction, medial rotation, and horizontal flexion of your shoulder joint.

Triceps brachii – located on the back of your upper arm, the triceps extend your elbow and also extend your shoulder joint.

Core – the collective term for the muscles that make up your midsection, your core keeps your midsection stable during knuckle push-ups and stops your hips from dropping out of alignment.

Forearms – bracing your wrists and balancing on your knuckles increases forearm muscle activation. There are several forearm muscles that affect your wrists, including brachialis, brachioradialis, palmaris longus, and flexor carpi radialis.

How to Do Knuckle Push-Ups

There are two ways to do most exercises; the right way and the wrong way. The right way produces the greatest benefits with the least amount of risk. The wrong way could lead to injury. Get the most from any exercise by always using the best possible technique.

1 – Make a fist with both hands. Do not tuck your thumb inside your clenched fist. Instead, place it around your first two fingers.

2 – Squat down and place your fists on the floor, roughly shoulder-width apart. Your palms should be turned inward in a neutral position. Make sure your wrists are straight.

3 – Keeping your arms straight, walk your feet back, so your legs and body are straight. Brace your abs and lengthen your neck. Tuck your chin in.

4 – Without dropping your head or hips, bend your arms and lower your chest to within an inch or so of the floor. Keep your upper arms close to your sides and your wrists straight.

5 – Push yourself back up and then repeat.

6 – Make knuckle push-ups more comfortable by resting your hands on an exercise mat or folded towel. Take weight off your arms by bending your legs and resting on your knees. Increase the difficulty by placing your feet on a bench or chair to put more weight on your hands.

Still not sure if knuckle push-ups are worth the extra effort? Consider the following benefits and advantages…

Less wrist strain – doing push-ups on flat palms involves a lot of wrist extension. Some people find this uncomfortable and even painful. With knuckle push-ups, your wrists are straight, which may mean less joint strain.

As useful as knuckle push-ups can be, they are not without drawbacks. Consider the following before adding this exercise to your workouts…

Uncomfortable –  there is no real padding on your knuckles, so resting all your weight in your closed fists can be very uncomfortable. With repetition, knuckle push-ups should become more tolerable but, initially, at least, they may be quite painful.

Make knuckle push-ups more comfortable by doing them on an exercise mat or a folded towel.

Risk of wrist injury – knuckle push-ups could make your wrists stronger, but they could also lead to injury. If you lose your balance, your wrist could fold under your weight, leading to joint stains or even a fracture.

According to ESPN, NBA forward Kevin Love broke his hand doing knuckle push-ups, so it’s evident that there is an injury risk when doing this exercise (1).

Not a fan of knuckle push-ups or looking for a way to add more variety to your workouts? Here are three similarly beneficial exercises you can do instead.

Doing push-ups with handles will allow you to mimic knuckle push-ups without resting your weight on closed fists. Your wrists will be straight, and you’ll be able to move through a larger range of motion, but you won’t have all that uncomfortable pressure on your boney knuckles.

No push-up handles? No problem! Use dumbbells instead.

Atlas push-ups are named after Charles Atlas, the self-proclaimed most perfectly developed man. Atlas was famous for his mail-order bodybuilding courses, most of which involved a type of isometric training called Dynamic Tension. However, Atlas also invented this push-up variation.

Atlas push-ups, like knuckle push-ups, increase your range of motion.

Dips work most of the same muscles as knuckle push-ups but without the pressure on your closed fists. The range of motion is bigger than for regular push-ups and dips put more weight on your arms, too. You should be able to keep your wrists straight when doing dips, making them more wrist joint-friendly than palms flat push-ups.

Learn how to do parallel bar dips here.

Knuckle push-ups are a traditional part of martial arts training. That makes a lot of sense because their main benefits (knuckle callouses, stronger wrists, etc.) could improve your punches.

However, for general exercisers, the advantages of knuckle push-ups over regular push-ups are very small. In fact, the potential risks may even outweigh the benefits. There are easier, safer ways to strengthen your wrists and forearms and increase your range of motion, such as using push-up handles.

That said, knuckle push-ups are a legitimate push-up variation, and providing you have strong, stable wrists and don’t mind a little knuckle pain, they’re certainly not a bad exercise.

American TV presenter and actor Steve Harvey has maintained great health into his sixties. Lack of connection with the younger...

Most bodybuilders use a combination of free-weight exercises and resistance machines to build bigger muscles, which is a process called...

Vince Gironda, nicknamed The Iron Guru, was arguably the first professional bodybuilding coach. During the 1960s, 70s, and early 1980s,...

Push-ups are arguably the most widely performed exercise in the world. Everyone from professional athletes down to kids in PT...