Bodybuilder Jacked is following a strict diet and training program to maintain his 302-pound monster physique. 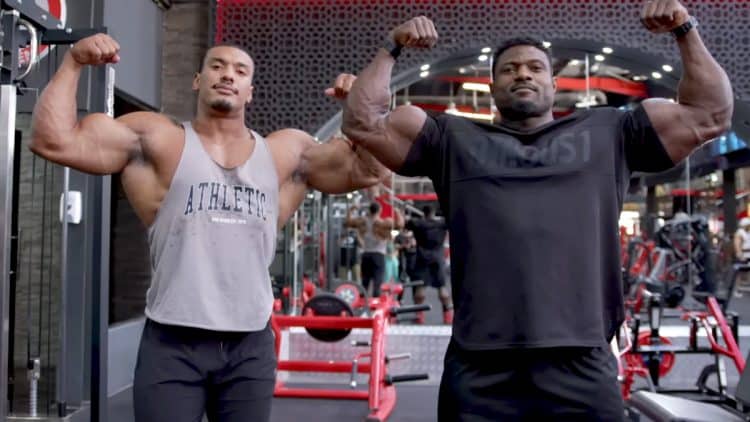 Powerlifter Larry Wheels recently joined hands with bodybuilder and former training partner Andrew Jacked for a shoulder and biceps workout. Wheels, a multi-talented personality, has competed in bodybuilding, arm wrestling, and strongman contests. A record-wrecking machine, Wheels is one of the few celebrities in strength sports to have publicly admitted to drug use. He was expected to compete in the 2022 Middle East’s Strongest Man. However, the 27-year-old withdrew from the contest due to a back injury. Realizing the health hazard associated with using PEDs, Wheels recently decided to stop their use and will now stick with using hormone replacement therapy exclusively.

Andrew has taken the sport of bodybuilding by storm in a short period. After earning his IFBB Pro card by winning the 2022 Arnold Classic Amateur, he demolished elite competition at the 2022 Texas Pro and walked away with his maiden Olympia invitation. Larry Wheels and Andrew Jacked perform a biceps and shoulders workout in Dubai, UAE.

Wheels and Jacked started the shoulder workout with the cable lateral raise. This movement works the lateral and front delt heads and warms up the joint for heavy activity later in the workout. The giants performed a few sets of this movement with moderate weights.

Wheels could not help but notice Jacked’s impeccable calves. He even joked that the 2022 Texas Pro winner could make millions by selling a calves training program.

“I do the calves before my workout. That was the discipline I gave myself… Every day,” Jacked replied.

Chest-supported dumbbell lateral raise served as the second warm-up exercise for the day. The duo started every set with two dumbbells and performed side lateral raises. However, for the last few sets, they super-setted the exercise with chest-supported dumbbell front raises by holding one dumbbell with both hands. After getting a few sets of this movement in, Wheels and Jacked moved on to the heavier sets.

The first heavy exercise of the day was a superset of these two shoulder movements. The overhead press is one of the most effective ways to work the shoulders. In addition to the anterior delt heads, it also strengthens the pecs, trapezius, and triceps. Upright rows specifically target the traps and lateral deltoid heads.

The training partners completed all the sets within the superset in rapid succession and with minimal rest periods. Wheels, who got off steroids recently, shed light on how his performance and training experience has changed with the decision. He stated that he feels much better during workouts now that he is not on a full steroid cycle.

“On a full-blown cycle on blast, within the first exercise, I’m already pumped,” Wheels said.

Wheels and Jacked took a step back after the taxing superset and performed the dumbbell lateral raise with moderate weight to conclude the shoulder session. Jacked is currently in the maintenance stage of his prep and is training with moderate weights. While speaking about his training, Jacked said:

“If I go heavy, it will take a longer time for my muscle mass to get opened up. When I go for a series of deep tissue massages, it will be difficult. But you’ve got maintenance, it keeps the muscles the same texture. It’s easy that way.”

Jacked is less than 17 weeks away from his Olympia debut and avoiding injuries during the competition prep is of utmost priority for the up-and-coming talent. Cable machines enable controlling weights better compared to free weights.

While speaking about his diet in between sets, Jacked stated that he doesn’t really count calories in his diet. Wheels added:

Cable hammer curls with rope served as the finisher to Wheels and Jacked’s shoulder and biceps workout.

Jacked has grabbed a lot of eyeballs recently. At six-foot-two, he is a lot taller than most Open division competitors. His size and aesthetics can pose serious problems to other top competitors like Mamdouh ‘Big Ramy’ Elssbiay, Brandon Curry, Nick Walker, and Hunter Labrada. Jacked will next compete at the 2022 Arnold Classic UK before making his Olympia debut in December. The sudden rise of a new top contender has definitely made things a lot more interesting in the top tier of the Open division.