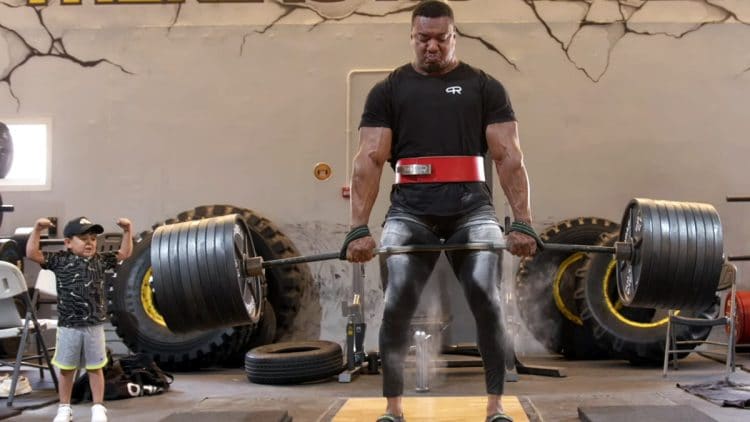 Popular strength sports athlete Larry Wheels is back to doing what he does best, lifting heavy weight. In a recent YouTube video, Wheels was joined by social media star and hype man Abdu Rozik to cheer him through a series of deadlift exercises.

Larry Wheels has an eclectic athletic background. After making his name well known in the world of powerlifting and strongman, Wheels decided to switch things up again, taking part in a number of arm-wrestling matches. While he struggled to find success in his new venture, the fact that he took the time to train a new discipline is an impressive feat by itself.

Since stepping away from arm-wrestling competitions, Wheels has decided to focus on preparation for a potential return to strongman. He is in the midst of improving his overall strength for the 2022 Middle East’s Strongest Man, which is set to take place on Aug. 27-28 in Dubai.

Abdu Rozik is a Tajikistan native who etched his name in stone after becoming the nation’s ‘smallest singer.’ He is at least 18 years old, though his birth date is unknown. Rozik has a rare condition related to dwarfism that many believe is connected to a human growth hormone deficiency. Despite his small stature, he’s plenty mighty and showed as much with Wheels in their collaboration.

In a recent YouTube video, Abdu Rozik and Larry Wheels joined forces to run through nine to ten sets of deadlifts.

“Here we are at Strong HQ with our special guest, the man, Abu Rozik and Mark Boyd of course. Training is as per usual except we have the greatest hype man to ever do it, Abdu Rozik right here, to cheer me on for my 400-kilogram for an attempted nine sets of one. We’re going to see how far I can take it. It’s quite ambitious. That’s 881 solid-ass pounds but woke up feeling fresh. Got Abdu here, he’s not going to let me fail. Without further ado, let’s get to work.” Larry Wheels shared.

“First time I’m doing deadlifts without sore hamstrings in like months since we started.”Wheels says

“We’re going way and above my usual threshold. Wheels added. I woke up today feeling rejuvenated.”

After hitting sets two and three, Larry Wheels attaches a lifting belt. All lifts were performed with wrist wraps.

“I hear you’re trying to put some muscle on these days? Larry asks.

Abdu Rozik picks up a barbell and starts pumping it like a mad man and then plays around with it. Boyd hands him a weight to practice lifting. After set six, Abdu helps Larry Wheels add weight plates for his seventh set.

After hitting his seventh set, the group joke about how many Abdu’s can Larry Wheels lift in total.

While Larry rests, Rozik deadlifts two dumbbells and then pushes a tire. Wheels gets back to business, sniffs some smelling salts and goes for his seventh and eighth sets.

After completing the two last sets of 400-kilogram (884-pounds), Boyd asks Wheels how he’s feeling, gauging if he is up for another set.

“Let’s call it. Purely to leave something in the tank, conserve and we will go forward later.” Boyd tells Larry.

Wheels is currently in prep mode and admit that he’s not on a heavy cycle right now. The 27-year-old made headlines recently after opening up about his use of trenbolone, a drug he says made life a ‘living hell.’

“I’m not on a heavy cycle right now. Let’s be real. This is the peak before the peak so there’s no need to go heavy with the compounds. It’s good heart training, diet and recovery. Larry adds. Yeah, four reps in one session, beating my previous best which is uno rep.”

Wheels is slowly getting his body primed to attempt another deadlift personal record. With his return to strongman on the table, the popular strength athlete is making the most of his time away from sanctioned competitions.