Popular strength sports athlete Larry Wheels discusses PED use during his career: "worst of them has definitely been Tren". 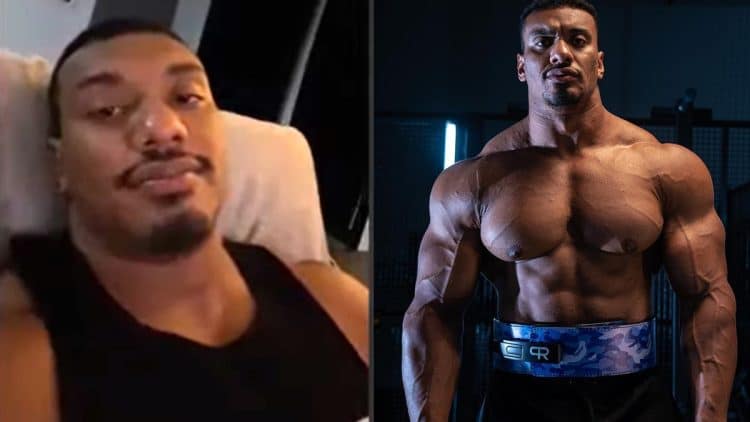 As a notable powerlifter, strongman, arm-wrestler and bodybuilder, Larry Wheels has tested the waters in just about every strength sport there is. In a recent interview, Wheels opens up on PED use throughout his athletic career and recalls Trenbolone as being his worst experience using steroids.

Wheels has garnered a massive social media following and likes to share his feats of strength and workout routines online. While Larry has dedicated a fair amount of time to training arm-wrestling lately, he intends to switch gears as he’s currently preparing for a potential return to competitive strongman.

In fitness, and especially in sectors like bodybuilding, strongman, and powerlifting, the use of PEDs has become an integral aspect of the competitive landscape. PEDs allow athletes to build upon their natural potential by gaining muscle and aiding in factors affecting overall performances at events.

As of late, the sport of bodybuilding has been dealt blow after blow, with a number of prominent athletes dying. 2018 Mr. Olympia Shawn Rhoden died last year at 46, George “Da Bull” Peterson died before competing at last year’s Mr. Olympia contest, and most recently the late passing of Cedric McMillan sent shockwaves throughout the community.

Given the concerning trend, Wheels decided to get his heart checked by medical professionals. The 27-year-old revealed his heart is healthy. Though, he remains worried about the rising number of deaths affecting the fitness community. Despite a love for lifting weights and practicing feats of strength, Wheels understands that consequences become involved when there are certain PEDs in the picture.

Larry Wheels Discusses PEDs “I Need to Dial Things Back”

In a recent YouTube video, Wheels reflected on some of his cycles and the damaging side effects like mood swings and insomnia caused by Trenbolone.

Wheels say he needs to dial things back as he intends to have kids soon.

“When you’re young, everyone tells you, ‘oh you’re young, don’t worry about it, you’re supposed to be healthy’ but you’re totally right on the same page. I’m going to be thirty soon. I need to dial things back. I want to have kids soon. I don’t want to be 35-40 trying to have kids. Wheels continues. I don’t even know if I’m fertile or not, I have to deal with that as well and figure that out. Life hits you, you know. It comes fast.”

As an athlete using PEDs for ten years, Wheels believes trenbolone made life a living hell. He revealed that aside from taking Trenbolone, his mental health was in good standing.

“There’s definitely consequences for running this kind of stuff for so long. I’ve been on PEDs for ten years straight right. The worst of them has definitely been Tren. I mean, all other PEDs my mental health is okay, I’m not paranoid or I’m not irritable or overly aggressive. So, it’s just that one, it’s just Tren. It’s a life living hell. I haven’t used it in a while for that reason, or orals for that matter.” Larry Wheels shared.

According to the powerlifting phenom, cycles today are heavier, as opposed to before, where he maintains that most athletes were using testosterone, Metandienone (D-Bol), and Growth hormone. The alarming rate of deaths in bodybuilding is causing Wheels to question the long-term effects of the PEDs in his regimen.

“We don’t really know what the long-term effect of abusing drugs can really be. We see guys like Arnold, and other bodybuilders back in the day, still okay today. But they were not using the same drugs that we were using today.

They were just on Test and some D-Bol. They didn’t have Tren back then. They weren’t taking 20-30 IU of Growth a day. They weren’t using it like we are using it today. What will be the long term effects? What will we pay for later on for doing this 20-30.

When these bodybuilders are passing away, a lot of them I’ve met personally, shook hands with. It’s just like surreal, they’re so young. Thirty, forty years old. They’re leaving behind children and wives, and it’s just really sad. You and I can both relate to them and what they’re doing. They’re passionate about fitness and taking PEDs. We share a lot of the same common interests.

We know what it’s like for them because we’ve been through it or going through it ourselves. It hits home when these guys pass away, which is why I took the initiative to get my heart checked even though I didn’t have any heart problems.”

In light of the number of deaths affecting the sport, Wheels remains concerned, but that hasn’t stopped him from doing what he loves inside the gym. In preparation for 2022 Middle East’s Strongest Man, Wheels recently hit a 425-kilogram (936.9 pounds) deadlift in training.

The 27-year-old is ready to make a statement in strongman. With the use of PEDs affecting the bodybuilding landscape, Wheels is prioritizing his health nowadays as he remains committed to strength sports.