Check out the results and recap for the final qualifying day of the 2022 World's Strongest Man. 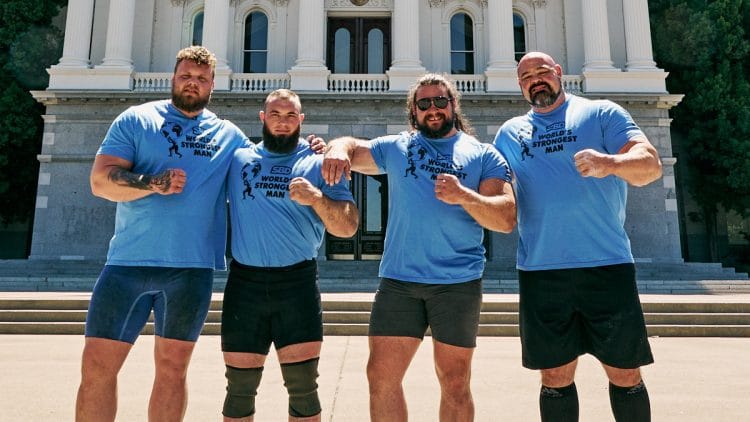 May 26th presents the third and final day of qualifiers for the 2022 World’s Strongest Man finals. Considering how action-packed the previous two days were, today should not be any different, as the leaderboards are about to finalize. Day three of the 2022 World’s Strongest Man features two events. The first one is the Wrecking Ball Hold for all groups. So after that event is finished, the 2nd and 3rd place overall finishers in each group go head-to-head in the Stone Off.

As day three is drawing to a close, it is also becoming clear which athletes have qualified for the 2022 World’s Strongest Man finals. 2022 WSM’s first and second days have already given us some insight into who might win the title. However, it isn’t a guarantee that everyone who performed well in the qualifiers is set to repeat that in the finals, as completely new events are awaiting them. Flowers is the only athlete that misses out on the final qualifying day, as he withdrew due to an injury from the Loading Race.

There is no live stream of the 2022 World’s Strongest Man, but Terry Hollands does host a daily recap on WSM’s official YouTube channel.   Get live updates, recaps, point standings, and results related to WSM here on Fitness Volt.

The competitors were required to grab and lift the bar, which was connected to the humongous wrecking ball underneath them. Athletes then attempted to hold the bar for as long as possible, and the timer stopped once the wrecking ball beneath them touched the ground. The weight of the wrecking ball was 228 kilograms (500 pounds). Athletes were not allowed to rest the bar on their legs or belt.

Tom Stoltman decided that he did not want to waste his energy and just claimed one point to qualify for the finals of the 2022 World’s Strongest Man. Kevin Fairies and Gabriel Rheaume placed second and third, so they are advancing into the Stone Off event.

Even before the event started everyone knew that Mark Felix would win this event. However, that was the end of Mark’s parfomances in the 2022 WSM, as Bobby Thompson and Brian Shaw advance to the Stone Off. Mitchell Hooper only got one point, but won group 2 having performed incredibly on the first two days. With the overall win, Mitchell secured his place in the finals.

Trey Mitchell won the Wrecking Ball Hold event, which placed him second overall, meaning he will have an advantage in the Stone Off against Adam Bishop. Novikov also had a solid performance, which was enough for him to win the group and start preparing for the finals.

Martins Licis is the fourth finalist of the 2022 WSM, as he won four points on the last qualifying event and put an end to his incredible performance of the last three days. Despite their great efforts, Boudreault and Kordiyaka were not able to outperform Licis, so they will go head-to-head in the Stone Off to fight for the finals.

As he accumulated three event wins and one second place finish in the first two days, Luke Stoltman did not even attempt the wrecking ball hold. Luke still won his group with a comfortable three point overall lead. Melsted and Coraboeuf will try to outperform each other in the Stone Off event, so the better of the two will also qualify for the 2022 WSM Finals.

Only the second and third-place finishers on total points after the five previous events became eligible to compete in the sixth event. The Stone Off can also be considered as a ‘last chance qualifier’ because the winner of this duel advanced to the final. Two competitors stand on the opposite sides of the bar between them, which is 1.25 meters (4′ 1″) tall. They took turns lifting the stone over the bar and the first person to fail this task loses the event.

Despite his four point overall lead in group one, which earned him the advantage in the Stone Off, Kevin Faires was not able to keep up with Gabriel Rheaume. Gabriel lifted six stones to qualify for the finals, while Faires attempted and failed his sixth stone.

This turned out to be the best case scenario for Brian Shaw as he only needed to lift one stone to win the duel and qualify for the finals. It appeared that Bobby Thompson faced some personal equipment issues, as the stone kept slipping from his hands.

This was an incredible Stone Off between the two men and it looked like it would go on forever. However, Trey Mitchell’s higher overall placing after the first five events turned out to be a huge advantage for him. Adam Bishop failed the 12th stone, and Trey did not even have to attempt it. With this win Trey Mitchell became the eighth finalist in the 2022 World’s Strongest Man.

Maxime Boudreault won the Stone Off and qualified for the finals of the 2022 WSM, which was expected as he was a podium finisher in the last year’s edition. Pavlo Kordiyaka put up a brilliant fight, but the 11th stone turned out to be too much for him. Maxime did not need to attempt the 11th stone, as he was placed second in his group after the first five events. This system was put in place so the athletes who place higher have an advantage.

Eythor Melsted fills up the last space for the finals of the 2022 World’s Strongest Man. Him and Coraboeuf have been pushing each other for the past three days, but Melsted ultimately came out on top. It was the same situation as in the previous group. Coraboeuf was first to fail a lift, and Melsted did not need to lift it to win because of his higher placing over the first five events.

The competitors who secured their place in the finals will first have a rest day on May 27, before taking part in two very taxing sessions on May 28-29. The 2022 World’s Strongest Man has featured some incredible performances in the qualifiers, but the finals will undoubtedly be even more fierce.

Watch the daily recap show presented by ‘The Beard Struggle’, and hosted by the 15x WSM competitor, Terry Hollands:

Still To Come For The 2022 World’s Strongest Man