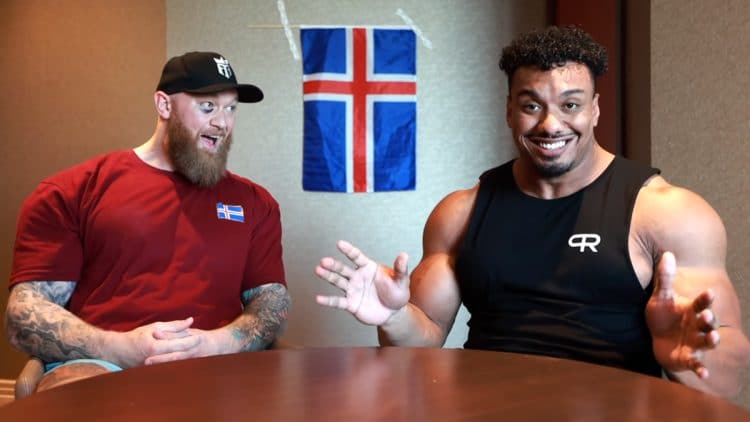 Hafthor Bjornsson and powerlifter Larry Wheels discussed the Eddie Hall rivalry in a recent interview. Hall and Bjornsson are bitter rivals since their days as competitive strongmen. The duo squashed their beef in a recently concluded boxing match in the Dubai Duty-Free Tennis Stadium in UAE. Bjornsson walked away with a unanimous decision win after six hard-fought rounds. During a recent video interview on Larry Wheels’ YouTube channel, Hafthor Bjornsson shed light on different aspects of the fight and the longstanding rivalry with Eddie Hall.

Bjornsson vs Hall was a back and forth affair and both men had their own big moments in the fight. After an emotionally charged build-up due to their genuine dislike, the fight really turned out as advertised. While there might still be some grudge between the men, Hall definitely earned his opponent’s respect with his performance. While speaking about Eddie Hall’s performance in the fight, The Mountain said:

Hafthor Bjornsson highlights the factors behind his win against Eddie Hall

Since transitioning to boxing, Hafthor Bjornsson amassed a 1-0-2 record in boxing and gained necessary exposure and sing experience before fighting Eddie Hall. On the other hand, Eddie Hall had exclusively prepared for Thor. He even suffered a setback due to the torn biceps and subsequent surgery. During the interview, Larry Wheels opined that Eddie Hall’s inexperience showed when he started to fatigue after the big first round.

Hafthor Bjornsson stated that his own improvements coupled with Eddie Hall’s over-reliance on his finishing ability caused Hall to fall behind as the fight progressed.

“I was able to get good proper training in my preparation for this fight honestly for two years. I was able to do three proper matches against proper opponents and I gained a lot of experience from it. But I came better out of each and every match.”

“I’m going to just keep improving if I want to keep staying in boxing. I think that was probably his downfall… Lack of experience and to be honest, having one game plan. The game plan was to take my head off in first round with an overhand right hook. That was his weapon really in the fight,” hafthor Bjornsson said.

After getting dropped in the early going, Hafthor Bjornsson was able to fight behind his jab and nullify Eddie Hall’s right hand with small steps to the right. The Mountain later explained that using his length to keep Hall at bay was the ultimate game plan heading into the fight.

Hafthor Bjornsson lays out a condition for a rematch

Hafthor Bjornsson and Eddie Hall have been bitter rivals for five years. A few months before the fight, Hall, and Bjornsson went back and forth over a wager and Hall finally proposed that both men will pay $200,000 each to a charity of winner’s choosing. In addition to that, Eddie Hall also proposed that the loser of the match will pay $1,00,000 to the charity. Responding to this Hafthor Bjornsson had proposed that the loser will get the winner’s name followed by the term ‘World’s Strongest Man’ tattooed on his body.

Eddie Hall has rooted for a rematch since the first fight ended and Bjornsson has shown interest in rematching the former too. However, during the interview with Larry Wheels, Hafthor Bjornsson went back to the wager and laid out conditions for accepting the rematch.

“I’m definitely willing to do a rematch if he keeps his words. He obviously have to get the tattoo ‘Hafthor Julius Bjornsson – World’s Strongest Man’ on his body. Then he has to give me $200,000 that I picked a charity that I will announce on my social media. Yeah, if he keeps his words, which I hope he does – then hundred percent we’ll do a rematch,” Hafthor Bjornsson said.

The Mountain speculated that Eddie Hall will definitely donate the money to a charity but might never get a tattoo to get the rematch.

“So in reality guys, I don’t think the rematch will happen because I just don’t see him (get the tattoo),” Hafthor Bjornsson stated.

Hafthor Bjornsson had a few training sessions with Larry Wheels a few months back. Wheels rooted for The Mountain and jokingly told him to ‘knock the head off of Hall. Digital artist Taurus Art and NFT’s created a graphic depicting Hafthor Bjornsson holding the decapitated head of Eddie Hall with Larry Wheels in the foreground. Wheels went on to post the graphic on his Instagram account. Hall blasted Wheels and Bjornsson for the post and then went on to challenge Larry Wheels on Twitter for a $10000 bet on who wins.

Eddie Hall and Larry Wheels had an awkward interaction over the post during an event and agreed for a $10,000 wager on who wins. Wheels remembered the interaction during Hafthor Bjornsson’s interview and said:

“Remember that photo? It was quite an artful piece of you (Hafthor Bjornsson) holding his head? It was good art, it was creative. He decided that it was going to be a good idea to say let’s bet 10 grand I’m going to win. I took the bet because I knew you were going to win.”

Courtesy of Larry Wheels’ YouTube channel, you can watch the full video here: